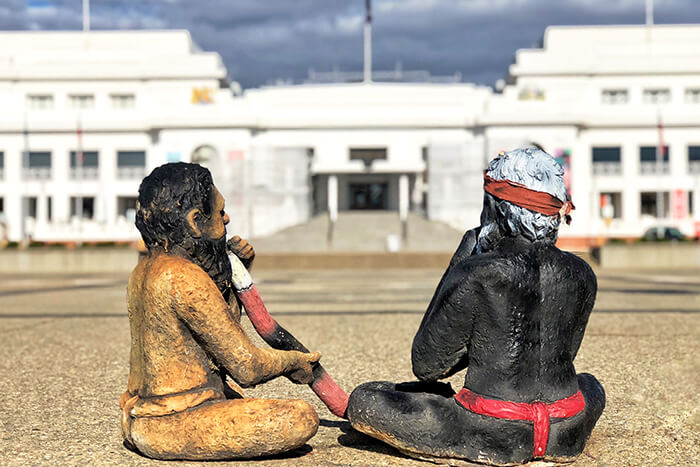 Australia’s National Capital was established on the traditional land of the Ngunnawal peoples and was also a significant meeting place for neighbouring clans, including the Ngarigo, Wolgalu, Gundungurra, Yuin and Wiradjuri people. Artefacts and oral histories tell us that these clans gathered here for ceremonies, trading and marriages, for well over 20,000 years. Canberra’s very name is said to have been anglicised from a local Aboriginal name for the area, ‘Kamberra’ or ‘Nganbra’, meaning meeting place.

The Ngunnawal continued to hunt, gather, celebrate and connect with this country into the early nineteenth century, until the arrival of European graziers, who restricted necessary movement and introduced animals that rapidly reduced seasonally abundant Indigenous food resources, including the Bogong moth and yam daisy.

While some Ngunnawal people adapted by taking jobs as stockmen, government policies created severe social pressures on Indigenous communities and many were displaced from the area. Today, descendants of the Ngunnawal people still reside in Canberra, and are working to preserve their culture through maintaining strong connections to their country and the inextricable links between sacred and secular landscapes. 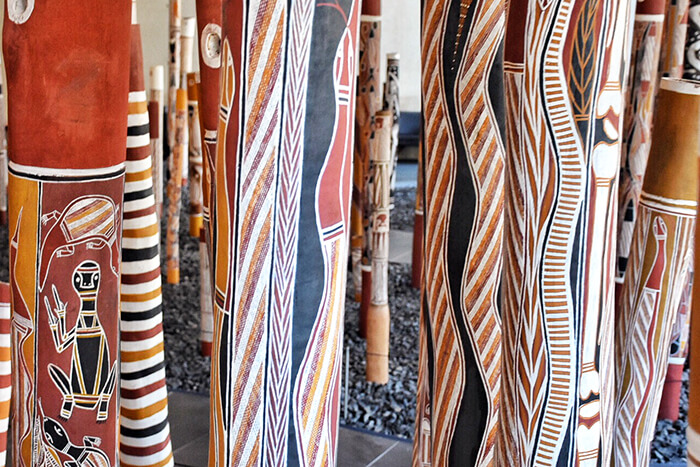 In our continuing efforts to raise children who understand the importance of reconciliation and connection, and to expose them to ancient Indigenous history and culture of the areas we visit, we make listening, learning and participating in Indigenous experiences an everyday part of our travel.  And in our experience-filled National Capital, which has more than 3,500 known Aboriginal heritage sites, opportunities are plentiful.

Here, we’re sharing a few of our favourite Indigenous experiences in Canberra.

In traditional times, the area now known as Canberra is generally understood to have been a meeting place where the Ngunnawal welcomed and hosted mobs from the surrounding regions to discuss land and lore, and for ceremonial purposes. Visitors are welcomed to explore this country along the self-drive Ngunnawal Country Track, one of the Canberra Tracks Heritage Trails. It’s one of our favourite Indigenous experiences in Canberra, with signposted trail stopping at various Indigenous sites including Cotter Reserve, Tidbinbilla, Tharwa, Namadgi, Tuggeranong and the Theodore Grinding Grooves, taking visitors on a journey that dates back 20,000 years. 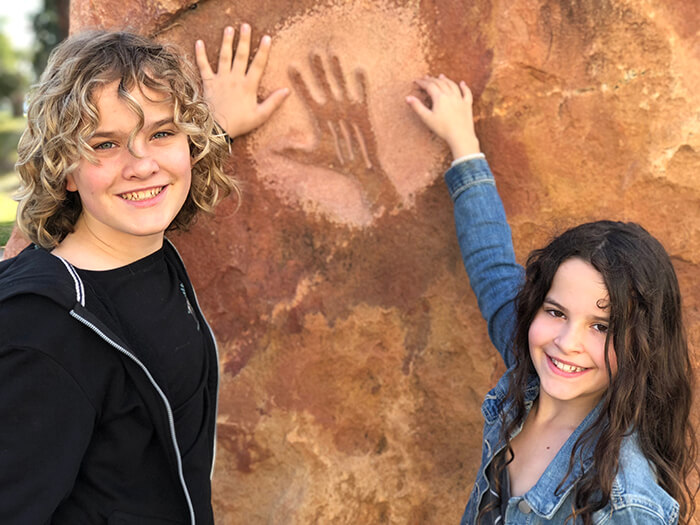 Canberra’s Reconciliation Place, an urban promenade which stretches between the National Library of Australia to the west and the High Court of Australia on the foreshore of Lake Burley Griffin, is an important symbol of the shared journey of Australia’s Indigenous people and its settler population. Raff and Sugarpuff enjoy meandering down it’s pretty pathways to explore and learn from the many public artworks representing Indigenous culture, reconciliation, the Stolen Generation and themes of Aboriginal and Torres Strait Islander achievement, belonging and connection. Each of the breathtaking installations helps us to understand and acknowledge Australia’s past, our own privilege and that reconciliation and connection is the only path forward.

The National Museum of Australia

First Australians: Gallery of Aboriginal and Torres Strait Islander Peoples is a permanent exhibition at The National Museum of Australia explores the shared stories and experiences of Australia’s first Nation’s peoples. The exhibition includes a welcome from Canberra’s Ngunnawal, Ngunawal and Ngambri traditional custodians and shares the story of ancient and contemporary Aboriginal and Torres Strait Islander history. The gallery examines expressions of culture, the impact of colonisation since 1788 and the lives of Indigenous people today through art, artefacts, Indigenous voices and innovative multimedia. For a deeper understanding of the diversity of communities and attachments to the country, a First Australians Indigenous Tour is available. 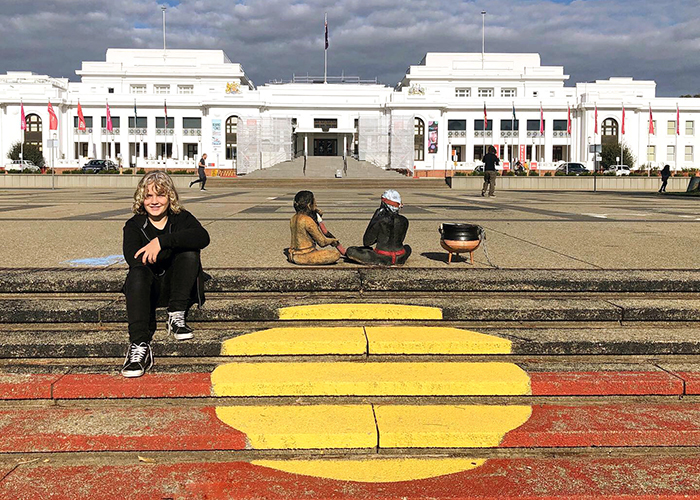 At the Museum of Australian Democracy at Old Parliament House, guests can learn about the pathways Indigenous Australians have taken to bring about change on a tour highlighting the experiences of Indigenous Australians within our democracy. One of the most unique Indigenous experiences in Canberra, the tour, which is available by booking only, introduces visitors to some of Canberra’s most important heritage spaces including the Senate, Prime Minister’s Office and Press Gallery as they hear stories of the contributions of Indigenous leaders and activists like Senator Neville Bonner, Wenten Rubuntja and Charlie Perkins. 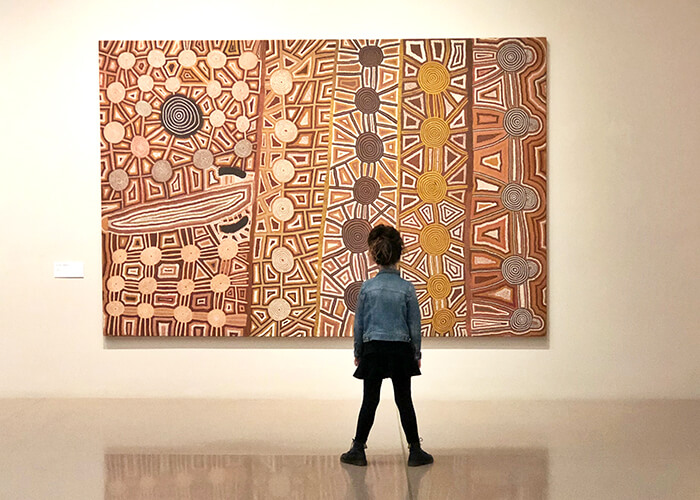 One of the places we most often hit repeat on in Canberra is the National Gallery of Australia. It’s phenomenal Aboriginal and Torres Strait Islander Art collection comprises over 7,500 works of art that tell myriad stories past and present. The largest collection of such artworks in the world, individual gallery spaces have been designed for different geographic regions and aspects of Aboriginal and Torres Strait Islander Art art to highlight the diversity and richness of works by some of the most significant indigenous artists in the world. Along with early bark paintings telling ancestral stories, there is a fine collection of contemporary artworks that make intellectual, provocative or political statements in relation to racism, oppression, marginalisation and survival. To learn even more about the stories told in these incredible artworks, join members of the local Ngunawal and Ngambri peoples at 3pm daily for a First Australian’s Indigenous Australia Tour of the collection.

Fallen in love with the pictorial stories of Australia’s First Nation’s peoples? Head to the Burrunju Art Gallery on Lady Denman Drive. This purpose-built gallery was established to provide local Aboriginal people an avenue to sell their art. Visitors are able to view and purchase a range of authentic, quality carvings, glassworks and paintings from more than 35 Indigenous artists from the not-for-profit organisation. 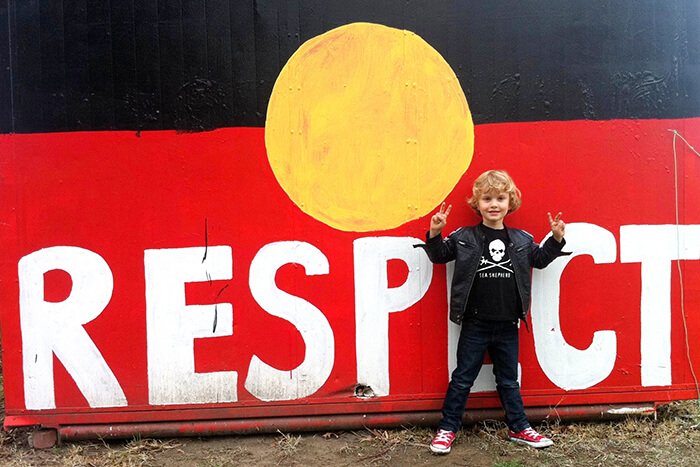 Ask my son his number one must visit destination in Canberra and without skipping a beat he’ll say the Aboriginal Tent Embassy. The historically significant site, located opposite Old Parliament House and first erected in 1972 to represent the political rights of Aboriginal Australians, remains a symbol of Aboriginal protest against the government’s approach to Indigenous issues. It might seem a little odd for a kid to have a connection to a place of protest and politics, but his attachment is due to an incredible encounter he had here when he was quite young, and he likes to return whenever he can to pay his respects and drop off his pocket money as a donation for the residing activists, whose openness and generosity of spirit have not only led my kids on a path of connection to country, but to beautiful friendships. There are no bells and whistles here, but a visit provides an excellent opportunity to open a dialogue about representation and the rights of Australia’s First Nations people.

One of the best  Indigenous experiences in Canberra is a visit to the extraordinary Tidbinbilla Nature Reserve.The Birrigai Rock Shelter at Tidbinbilla Nature Reserve, just 45 minutes from the Canberra CBD, is one of the oldest known inhabited rock shelters in the world, dating back over 25,000 years to the end of the last ice age. An important place for Ngunnawal ceremonies, the reserve is dotted with sacred places of cultural lore and sites special to Aboriginal People of the region. Join an Aboriginal Ranger guided Aboriginal Culture and Heritage tour for a unique opportunity to explore and understand the long and ongoing connection of the Ngunnawal people with the local flora and fauna, including the koalas, kangaroos, wandering wallabies and emus, and even the elusive platypus that still call the reserve home.

Venture into Namadgi to discover its Aboriginal heritage. Explore Namadgi National Park, 45 minutes south of the Canberra CBD, to discover its Aboriginal heritage. The location of the Yankee Hat art sites, a complex of boulders situated at the foot of Yankee Hat Mountain, there’s a six-kilometre trail that takes visitors to a rock shelter where artworks, thought to be hundreds or even thousands of years old, are drawn onto the rock surface with clay. Visit with Dharwra Aboriginal Cultural Tours for a guided Aboriginal interpretation of the surrounding landscape, native wildlife, bush food and traditional culture.