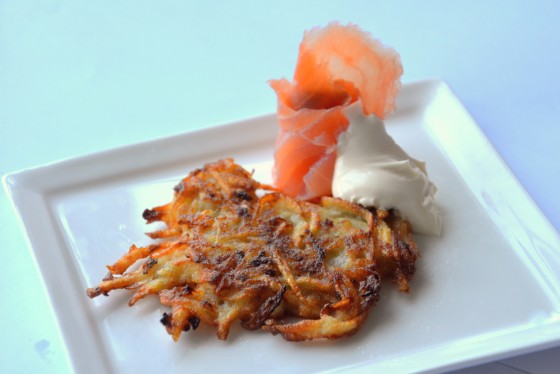 “Mama, what is a dreidel?” asks Raffles, a little belatedly given that he’s been singing The Dreidel Song on loop for the last several days. Good question, little man, and great timing too as it’s the most dreidelest time of the year.

But first a little background. Just like Christmas, Hanukkah – The Jewish Festival of Lights – is a time to rejoice, to celebrate, play games, give gifts and be with family. Unlike Christmas it doesn’t commemorate a major biblical event. Like most secular celebrations (regardless of faith) it does come with buckets of beautiful ritual and tradition. It also comes with deep-fried food. How could we not want to learn more?

To those who aren’t Jewish (and I count myself here) Hanukkah is probably the best known of the Jewish holidays but, to Jewish folk, it doesn’t have quite the same significance as holidays like Yom Kippur or Passover. It’s not even in the Torah as it commemorates a later event. Mind you, that event was a triumph over religious persecution – so kind of a big deal.

The attention the festival receives now probably has a lot to do with its proximity to another December celebration. You know… the one with Baby Jesus and/or Santa Claus depending on your religious persuasion, or lack thereof.

A note: This blog is not about whether a faith or belief is right or wrong but about tolerance and acceptance of others. Right now, my own personal belief structure is based predominantly around Santa Clause and the Easter Bunny with a side-order of Mutant Ninja Turtles. Why? Because they are real to my pre-school kids and it makes them happy. Do I worship them? Not at all! But  I do kinda like them! BOYEATSWORLD is not about judging differences but embracing all people, all cultures and all faiths, with respect. It’s about my children learning about the people of the world, and that includes the rituals of the different beliefs that float their secular boats as there is beauty and goodness to be found in them all.

So, with Buddha already sitting comfortably under our Christmas tree (to the right of Santa, the left of a hand-made raffia angel from South Africa and underneath a spectacularly glittery camel we found in the Middle East) I’ve decided to throw another spiritual curve ball at this year’s festive fun by taking Raffles on an edited highlights tour of the traditions of Hannukah, in honour of our Jewish friends.

For children, the eight-night celebration generally includes the lighting of a Chanukiah (a nine-branched candelabrum used especially for Hunnakah) on each day of the holiday in honour of a millennia old miracle where a small cruse of oil that burned for eight days. The festivities also include playing the dreidel game (and finally I answer Raffles original question… a dreidel is a four-sided spinning top), eating foods cooked in oil (in celebration of the aforementioned oily miracle) and exchanging gelt (golden coins, generally of the chocolate variety).

Little Raffles is lucky enough to attend a pre-school where different cultures and beliefs are embraced and his lovely teacher (who happens to be Jewish) has taught his class the Dreidel Song for their end of year concert.

Hence the sudden interest in dreidels and Raffles penchant for bursting into, “Oh – dreidel, dreidel, dreidel I made it out of clay! And when it’s dry and ready, then dreidel I shall play”, between renditions of Jingle Bells and Gangnam Style.

In the absence of an actual dreidel (though Google at least allows me show him what one would look like) his singing proves a jolly substitute. The lack of a Chanukiah is trickier… so we draw a symbolic one and Raffles is drawing in an extra flame on his picture each night. 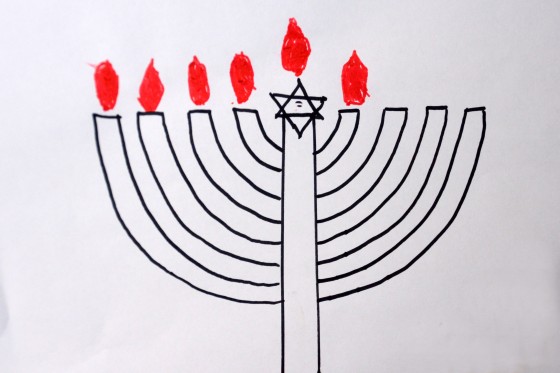 As usual in the house of hunger, our research is going to look with particular favour on the tastier traditions. Raffles certainly has no issue when I introduce him to the giving of gelt. Indeed, so impressed is he with the concept that he asks us if he can be Jewish forever. That is until we gently explain that the coins are given to help children learn about charity and that there’s a lot more to being Jewish than simply eating chocolate.

Got a week, little man?

As Hanukkah celebrates the miracle of oil, festive foods tend to be fried in the stuff! Latkes (potato pancakes) are a tasty example of festive food and today they’ll make us an appetising afternoon tea. Traditionally served with apple sauce or sour cream, we’ve snuck in a side of smoked salmon and a dollop of crème fraîche for an extra tasty twist.