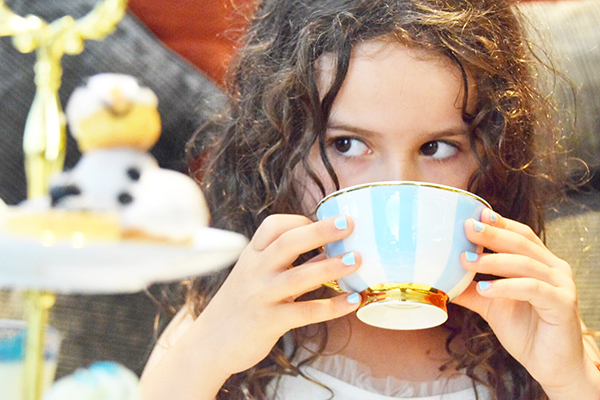 With tandem deadlines flying out my hoo-hah for the last six months, and a whole bunch of work travel, I’ve been working crazy hours, seven days a week. While many would say that, as a freelancer, it’s great that I am in demand (and it most definitely is) long hours and weekends on the job are not exactly conducive to quality parenting, or even humaning, if that’s even a word?

While Raffles understands, knowing the extra hours are a temporary glut, my wee Sugarpuff struggles with the automated “Not now, can’t you see I’m Busy”, that seems to be her zombie-like mother’s response to just about everything lately. In desperate need of some proper, undivided attention from her laptop dependent mother, I staged a little self-intervention and promised I’d shut down the laptop and whisk her away on a girls own adventure with cake, cuddles and carry on at Sofitel Sydney Wentworth, where we’d done the same earlier in the year. 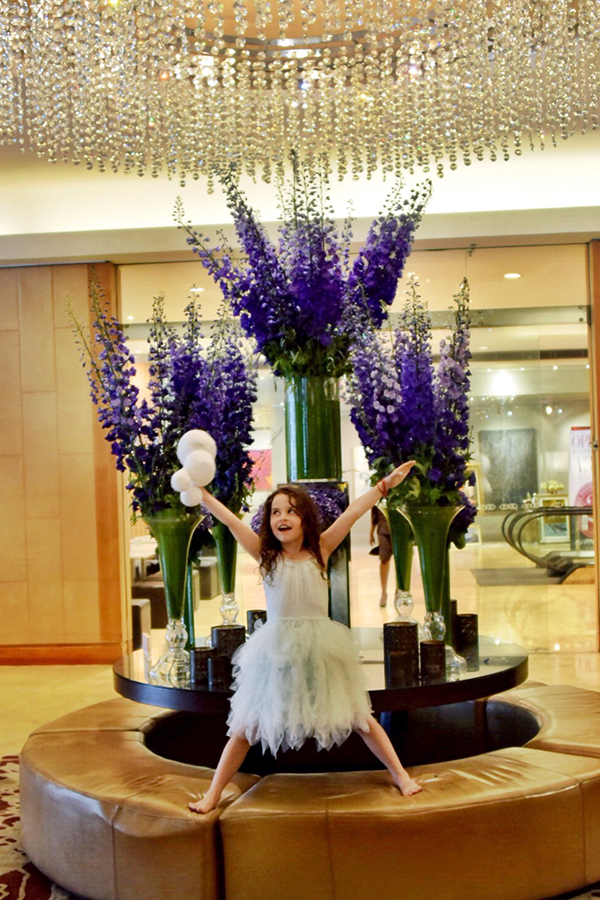 What I didn’t tell my frost bitten beauty was that as well getting a little uninterrupted mummy time, we’d be heading on a Frozen adventure with the hotel’s Disney Family Fun “Frozen” package, launched to help Disney celebrate the release of ‘Olaf’s Frozen Adventure‘ on 26th December.

Already excited, the welcoming Bonjour as we entered the 5-star hotel’s elegant lobby had her smiling so hard I though her head would crack open. When she was handed a pretty package of chocolates at check in, the happiness rose to near combustible levels. 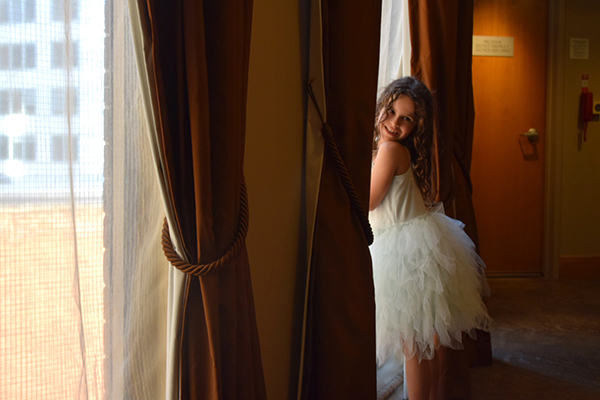 It was a good job I was able to shut the door of our room before she spotted the pile of Frozen goodies lying in wait on our bed, because that tipped her over the edge. Her excited squealing was so loud, I was concerned the hotel would think I’d smuggled a troop of howler monkeys into the room. 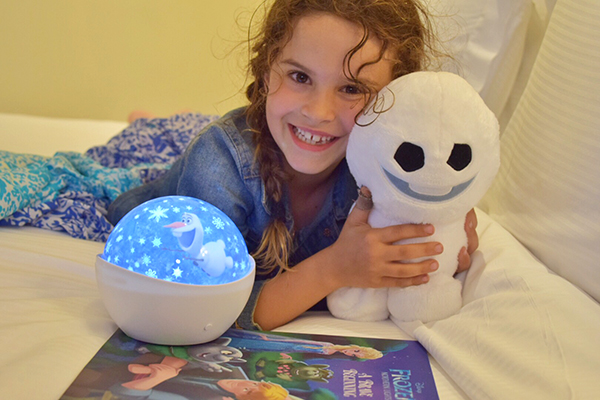 Not only was there a gorgeous Frozen story book and a pretty snowflake adorned nightlight, there’s was a cuddly Snowgie, one of Elsa’s cute snots, on her pillow.

She also rather fancied seeing herself in triplicate in the marble bathroom. 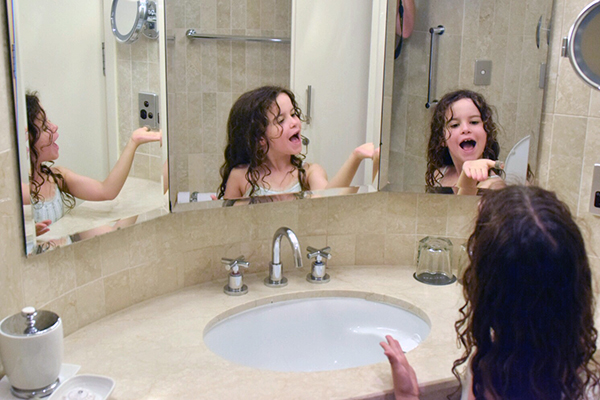 Sugarpuff dubbed her Snowgie Lord Snottington and insisted he join us at dinner in the hotel’s Garden Court Restaurant, a pretty space with a garden courtyard vibe and a menu of French-infused delights where, as part of our Family Fun “Frozen” package, Sugarpuff ate for free. We chose to head back to the comfort of our suite for room service dessert – a ridiculously chocolatey confection for her, and a sublime tart tartin for moi – which we devoured snuggled up in bed, because… hotel! 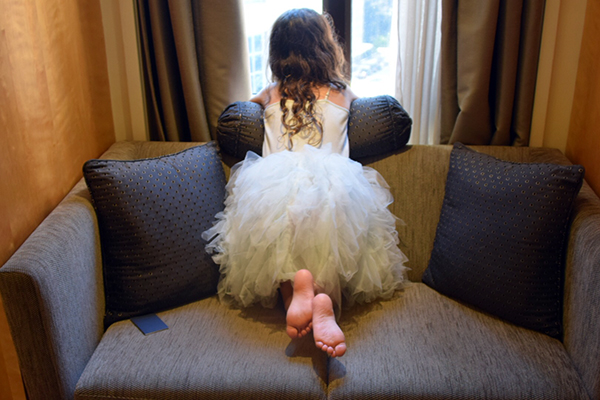 The following morning we breakfasted at the buffet before heading to the neighboring arcade for matching manis in fabulously frosty ice blue. Then it was time for the main event, a magically Frosted High Tea in the elegant Soiree at Wentworth. 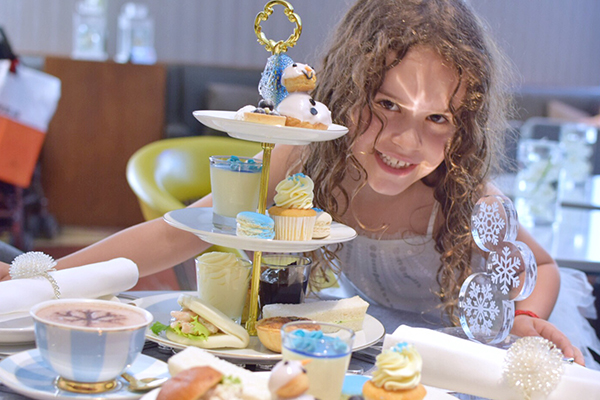 The High Tea was a work of indulgent edible art, packed high with mouthwatering French delicacies inspired by the magic of the movies. 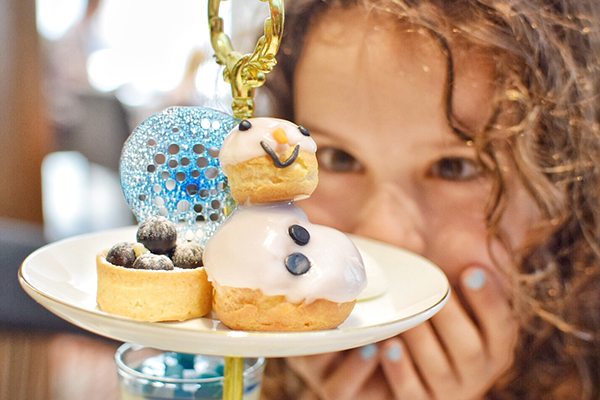 While I can’t wax lyrical enough about what a wonderful time we had, it is not my story to tell, that honour belongs to the lovely Sugarpuff, who has asked me to hand over the reins of the blog so she can tell you about our stay (with a little grammatical assistance from her mama). So over to her…

“I was so excited when Mamia told me we’d be going to the Sofitel for a girl’s only visit, because she is always working and I never get to play with her, which makes me sad. I love Sofitel hotels because they’re very fancy and because the people are always super kind to me. And because my brother is always on the TV in our room, which makes me not miss him too much. 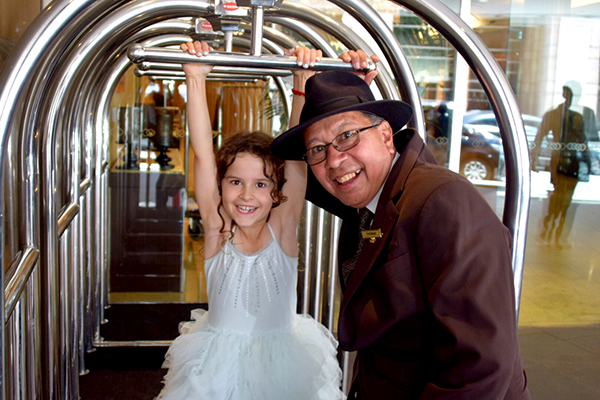 This time was super-duper special because there was Frozen stuff everywhere. On my bed there was a Frozen book about trolls and a pretty night light that made snowflakes all over the walls. But my favourite thing was the snuggly Elsa snot who I called Lord Snottington, because it’s a little bit posh at this hotel.

After Mamia read me the book, it was crazy dancing time. She played lots of my favourite songs and we danced and danced until we fell on the bed. Then I made her have a pillow fight with me and I won.

We had dinner in a nice restaurant with pineapples on the wall. I love pineapples so I liked it a lot. I had the yummiest fish ever. I also tasted some of Mamia’s duck and tried Paris mash and it was so good I ate it until I was going to pop.

Mamia and I went to our room and snuggled up and watched a movie and ate a huge chocolate dessert in the actual bed. That was fun because at home Mamia doesn’t even let us eat in our room. 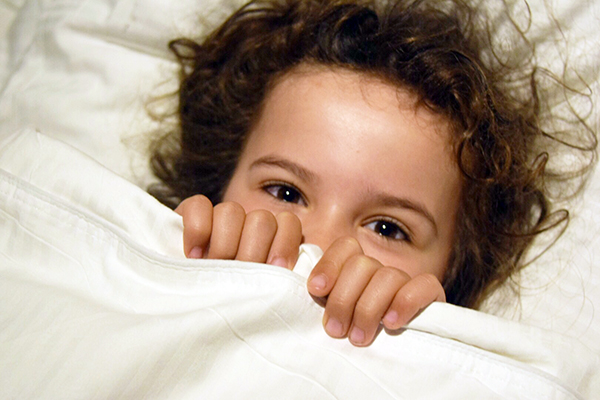 When we woke up we went to breakfast and the chef made me poached eggs and there were rice bubbles and a nice French lady with a pretty voice gave me a Frozen colouring book. I made Sven the reindeer look like a rainbow.

Mamia took me to get our nails done and I had my fingers painted the colour of ice. They looked really pretty. Then I got to put on my tutu and we went for super cake for lunch.

Super cake is when you get a big tall plate with loads of cakes. Mamia calls it high tea but I don’t drink tea, I drink hot chocolate, so I think that’s a silly name. My hot chocolate came in a stripy blue cup that matched my new nail polish. 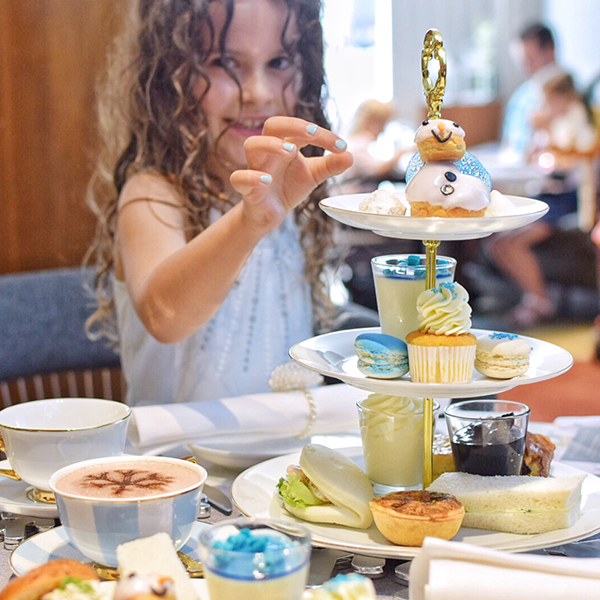 The table was pretty because there were shiny snowflakes all over it and pretty sparkly silver napkin things on the table. 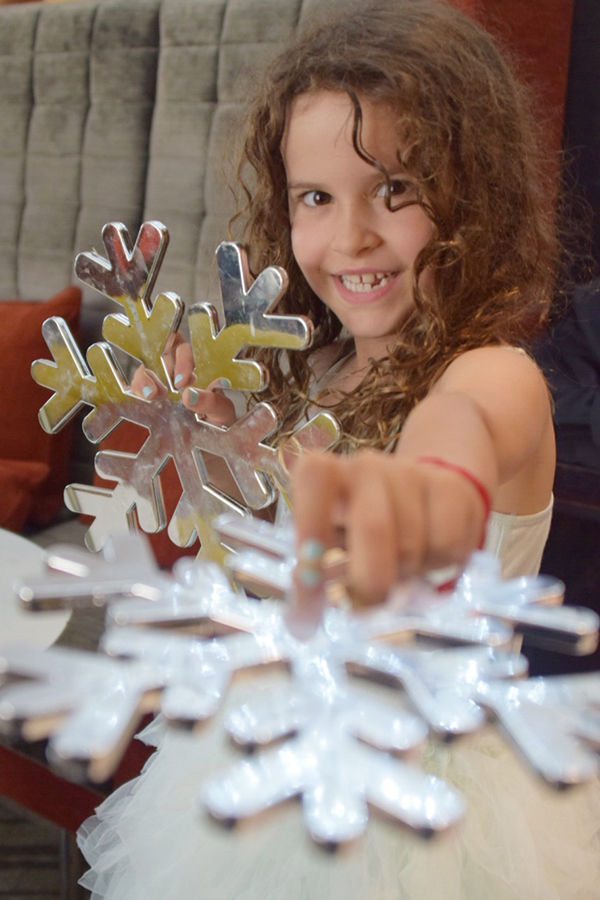 Our cake plates were so big and everything was my favourite colour blue. Except the sandwich, because blue sandwiches would be gross. Mamia’s was a big tower but I ate everything I wanted it from it and let her eat the things I didn’t want. I don’t think she minded. 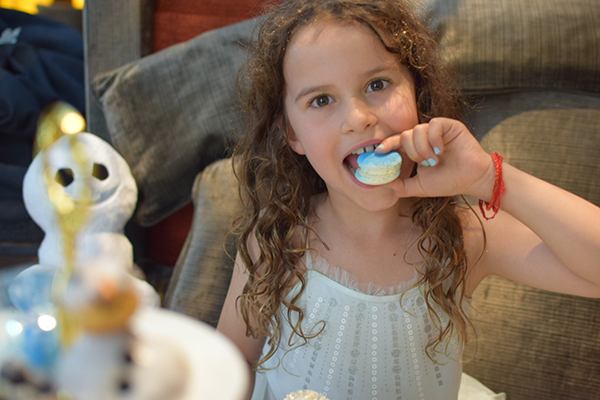 I had my own plate and it had a cucumber sandwich, a squished chicken bun (chicken brioche), a blue macaron, a meringue, a cookie, a little (blueberry) tart that was all frosty looking, a pretty cupcake, some yoghurty stuff (vanilla bean panna cotta) and an Olaf cake (religieuse) with a little carrot nose that was so cute. But I still ate his head off. 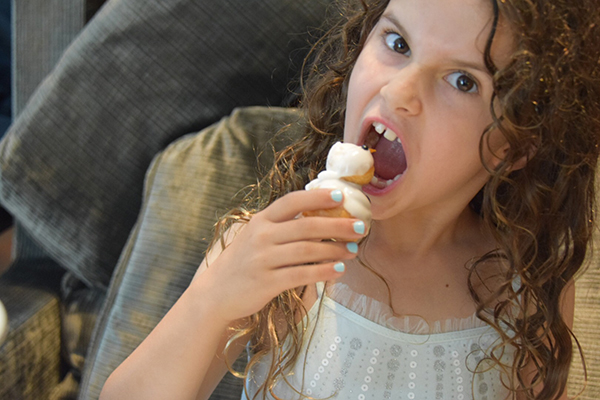 Mamia had those too but she also had scones and the jam that came with them was full of yummy berries. She also had a prawn thingy (shrimp bao bun) and a (salmon) quiche that she let me try. I liked it.

They also gave me a Frozen sticker book. I felt so special but the best part was having my Mamia all to myself, because I love her so much and she’s mine.”

By Sugarpuff – Aged 6
(As dictated to her ‘Mamia’. Bracketed information added by same)

The Frozen Family Fun Package is available until 31 January 2018. Packages include accommodation in a Superior Room, buffet breakfast for two adults and one child, complimentary dinner for children up to 12 years of age when dining with a paying adult and Disney welcome gifts.

The Frosted High Tea can be booked separately and comes in both adult and children’s portions.

And for those looking for a “white” Christmas in sunny Sydney, there’s also a magical Winter Wonderland luncheon on Christmas Day with special guest appearance s by a certain jolly red-suited gent and some very special guests all the way from Arendelle.

Disclosure: Sugarpuff and I were guests of the Sofitel Sydney Wentworth but all wild dancing, pillow fighting, cake consumption and opinions are our own.