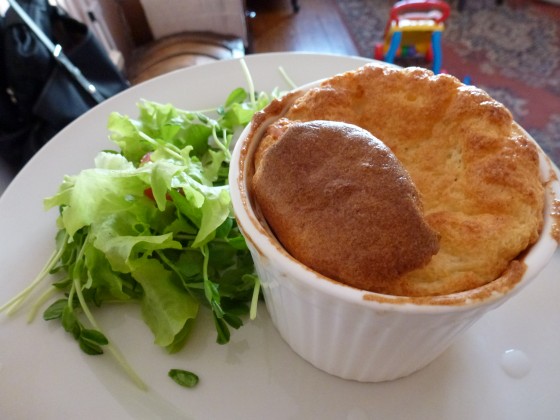 Woken by a little voice squealing “Bonjour mama, it’s Paris day”, I am dragged from bed (kicking and screaming) for the can’t possibly be delayed task of looking up France and, more specifically, Paris in an atlas.

Marveling at its distance from Australia, Raffles is eager to get started on our “day in Paris” so we hit my cookbooks for inspiration. For something with a Parisian Bistro twist, Ripailles by Stephane Renaud seems like a good place to start.

Over breakfast of Pain Perdu (French Toast to the layman and an absolutely Un-Parisian thing to consume for breakfast but it’s at the behest of a three-year-old trying his hardest, so I am happy to overlook the cultural faux pas). Raffles pores over the pictures and asks lots of questions before decisively announcing his first choice…

Foolishly perhaps, I had promised him that he could choose whatever dish he wanted, so Soufflé au Fromage it is.  Raff also requests a Tarte Fine Aux Pommes, a simple dish to balance the ridiculously ambitious main course.

His dad kindly points out that he probably chose a simple tart because it reminded him of his mother!  Everyone’s a bloody comedian.

Grocery shopping is far more fun than usual. We’re on a mission to find cheese for the soufflé. Being three and generally more inclined to distractions of the shiny ball kind than heaving shelves of cheese, Raffles had never really considered just how many types existed and is intrigued. An age is spent as we chat about all the cheeses, what they are for and where they are from. We find the gruyere we need and grab some free-range eggs, fresh nutmeg, apples and (because I am lazy and want to dodge at least one gastronomic bullet) some Carême All Butter Puff Pastry! Then we head to the deli for a slab of the unctuous loveliness that is Fromage Dauphinois, a slice of duck and black pepper pate, and a freshly baked baguette for our tasty lunch in the park.

Immersing himself into the “Frenchness” of our day, Raffles insists we play one of those touristy French Language CD’s in the car and once home some old school French tunes (which leaves me wondering if the dudes at casa conception mixed up some embryos from “somewhere beyond the sea” and accidentally implanted me with the love child of Charles Trenet and a French Tour Guide). As we sing along, very badly, to La Mer  we head for the kitchen to prepare dejeuner and that scary soufflé.

The word soufflé comes from the French verb souffler which means “to blow up” which is precisely what I feel like doing in the initial frustration of food prep at 3-year-old speed. Then I remember we aren’t out to earn a Michelin star, just to have fun and learn. Watching my baby’s gap-toothed grin as he happily beats the crap out of some eggs whites while I make a roux fills me with joy (though admittedly, so would being the world’s first Michelin starred home kitchen). 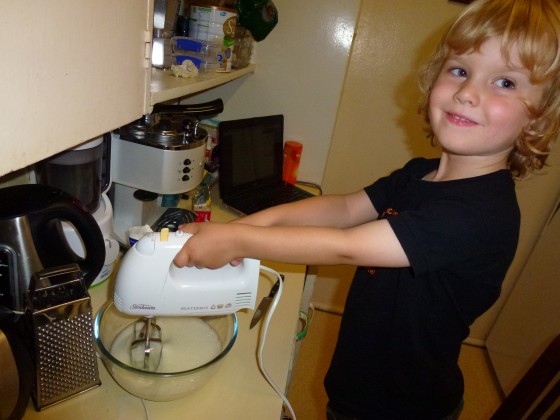 Raffles assists with the milk and tosses in the cheese while I stir the mix until it becomes all homogenous and gloriously gloopy. 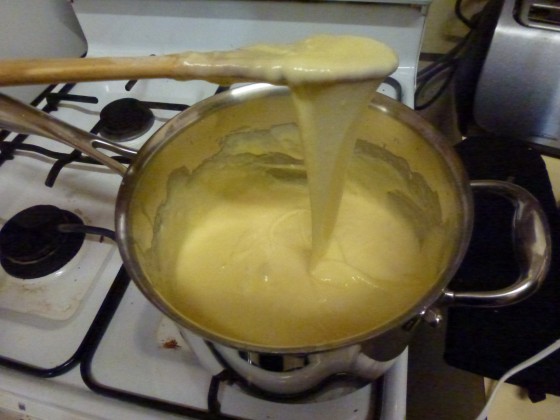 The fresh nutmeg throws him. He insists it smells like smelly feet but is still interested in its whole form. We combine his egg whites with my cheese mix and fill up our ramekins. As they are carefully placed into the oven I teach Raffles how to cross his fingers for luck. We’re going to need it.

The soufflé has risen and is bursting up out of the ramekins as Raffles proudly takes them to the table. I notice they’re sinking so with an urgent “bon appétit” we hurriedly dig in.

They’re airy and light despite the sag and – when you consider our three-year-old sous chef – remarkable. Raffles gives his the thumbs up, Mr Eats World goes back for seconds and even Sugarpuff gives a squawk of approval. The decadence of soufflé as baby food delights my inner gourmand more than a little.

We chat a little about eating at the French table. We tell Raffles how the French love fresh food and shop daily for ingredients. Each from a specific providore –  cheese from the Fromagerie, fish from the Poissonnerie and bread from a favourite boulangerie – happy to go out of their way for the best – a beautiful approach to produce. We chat about a culture where family time is important and food is best shared. We wax about the attention to detail that goes into the preparation and presentation of French meals and the absolute importance of being mindful of manners, which provides us with a non-confrontational opportunity to discuss table manners and respect for our hosts. To counter all the seriousness we get silly and talk about some of the crazy things the French love to eat like snails and frog’s legs – which a disgusted Raff opts not to believe. Our lively Gallic chit-chat continues until dessert.

It is here that culinary magic has occured, in no small part to my small sous chef. Raff is a dab hand with a rolling pin, having assisted loads of times with pizza, so he rolled out the pastry and spiked it with a fork before I sprinkled it with couscous. The knife-work is not for three-year-olds so I hand over slices of apple and leave him to decorate the tart, which he does to stunning effect, painstakingly matching the example in the cookbook. 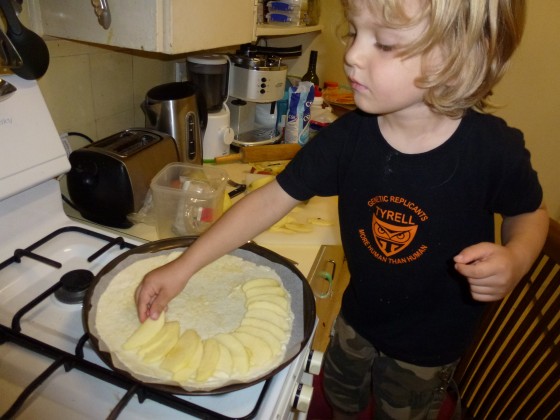 He “paints” it with melted butter, sprinkles on some caster sugar and into the oven it goes… 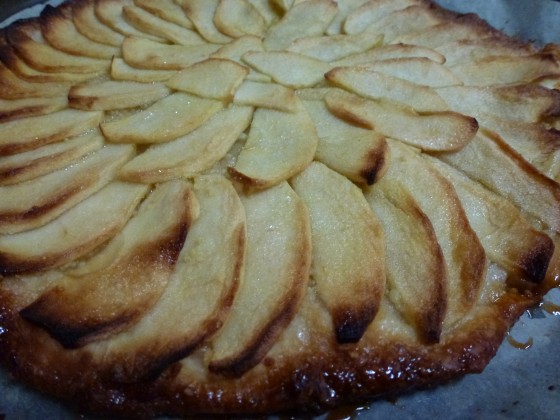 My boy is justly proud of his handy work. The tart is satisfyingly crispy and sweet and we polish off the lot in one sitting. Whoops. We can teach him about the French art of restraint another time.

Not wanting his day of Parisian fun to end we watch one of his favourite movies, Ratatouille, set in Paris and all about food then giggle through a bedtime reading of the fabulous Mr Chicken Goes to Paris… 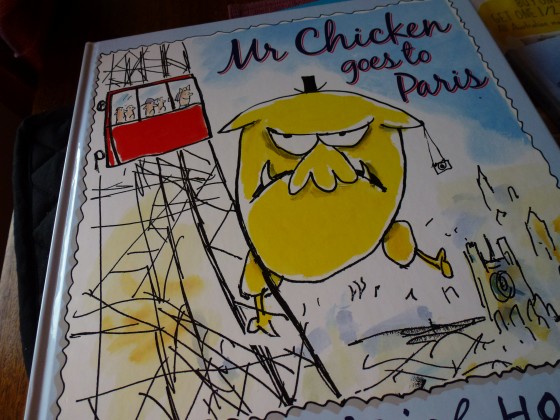 …before he falls into a contented sleep to dream sweet dream’s of Paris and climbing his beloved Eiffel Tower.