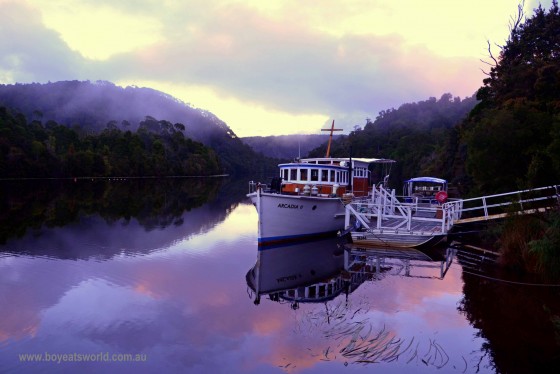 For a smart phone addict like myself, the idea of three whole days deep in the Tasmanian wilderness with NO PHONE SIGNAL is akin to being denied oxygen. And what do you mean there’s no Facebook access, man!? Gulp.

We’re off to Corinna, a wilderness retreat that’s well, in the wild… the really, really wild. Like wild with trees and critters, wild! It’s about four hours drive from Launceston on Tasmania’s wild west coast, and did I mention, there’s no PHONE SIGNAL!

On the way we make a requisite stop at the Christmas Hills Raspberry Farm in Elizabethtown to stretch the legs and enjoy a lunch of raspberry-infused beef sausages (yes, really), Tasmanian smoked salmon, pate, wads of delicious local cheese and a raspberry Affagato or two. Ok, three. 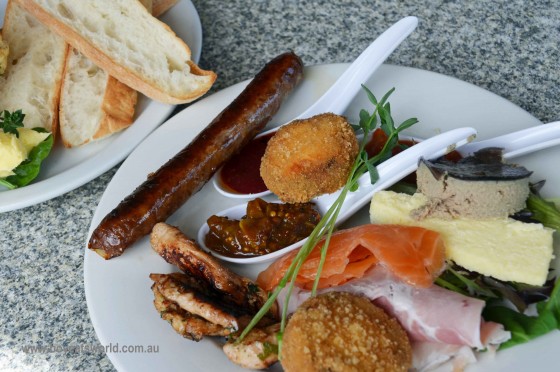 I also grab a suitcase full of their can’t live-without chocolate coated raspberries. 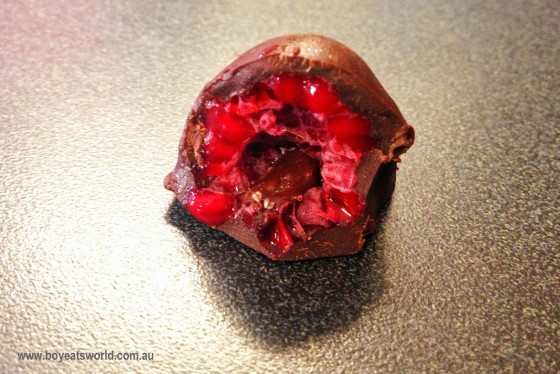 These babies may come in handy to stop me devouring the other guests once the phone drops out and I descend into panic imagining that I’m entering a real life episode of Survivor. The reality of course is far less dramatic and no humans will be consumed or bitten during the writing of this blog post. However in saying that I must confess that a slightly confused Sugarpuff is convinced that Corinna is in Transylvania but I promise that, aside from the odd leech and mosquito, there’s very little vampire action here either.

The Corinna Wilderness Experience, located on the banks of the Pieman River in the heart of the Tarkine, is undeniably remote but it’s also comfortable, has an amazing restaurant (the chef is ex-Rockpool and Vue de Monde), and there is little chance of me ending up in a situation where I need to drink my own urine to survive. Their cheeky little Pinot Noir is a far tastier choice of beverage.

Here I have no choice but to detach my retinas from my iPhone. I spend the first evening staring forlornly at the “No Internet Connection” message taunting me, and use all my non-existent Jedi mind-powers to will it to pick up some weakened signal from a backpacking satellite that just happens to be trekking through the tangle of theTarkine. To no avail.

I guess I’ll just have to suck it up and enjoy the ridiculously pretty wilderness instead. 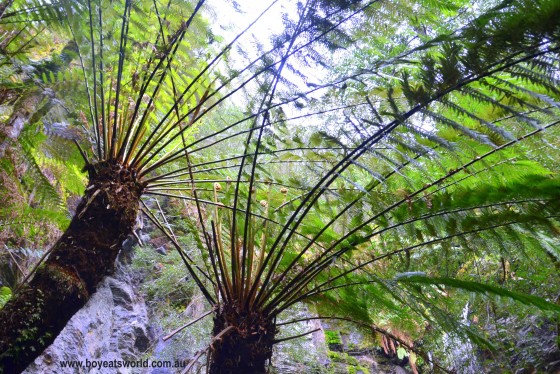 In place of Facebook I’ll get a faceful of fresh air and a forestful o’frogs and the only twittering will be done by the pretty blue birdies flitting about. 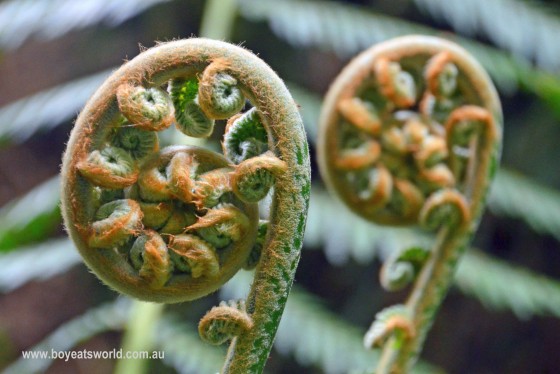 There are also lizards darting around and fluffier critters like the insanely cute pademelon to keep me entertained. 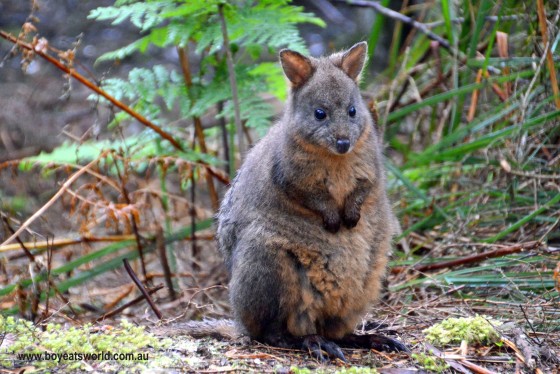 Plus the nocturnal Tassie Devil and, allegedly, the last remaining Tasmanian Tigers. Long declared extinct, rumour has it they may still roam in the impenetrable tangle of the Tarkine.

And so I have decided to find one. That, and a huge nugget of gold. Ooh, then I can buy my own satellite. Haha! Take that wilderness!

The town of Corinna was originally a goldrush town that, at its peak in the 1890’s boasted a character filled population of 2500, one of whom was the postmistress, Jessie. Between raising five children and working, the dedicated wife would row her husband across the Pieman River to his favoured pub (even though there was one on their own side of the river) and bring him back again every evening. As one does. The husband died young. Personally, I’m tipping she pushed the bastard in the river.

Only three of the original Goldrush buildings remain, and all are available as accommodation. There are also sixteen lovely new wilderness retreats which, in keeping with Corinna’s eco philosophy, are serviced by solar power and back-up generators. 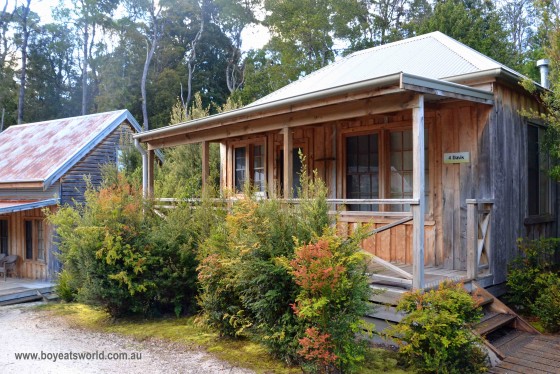 The retreats are surrounded by well-marked walking trails each offering it’s own unique take on Tarkine beauty. 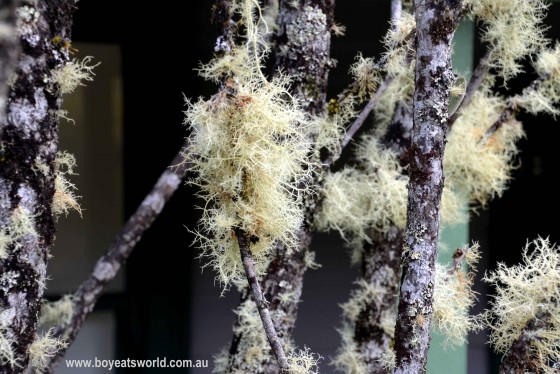 One that is relatively easy for a slothful creature like myself is the hour-long Whyte River Walk that winds through a fertile fairytale forest. 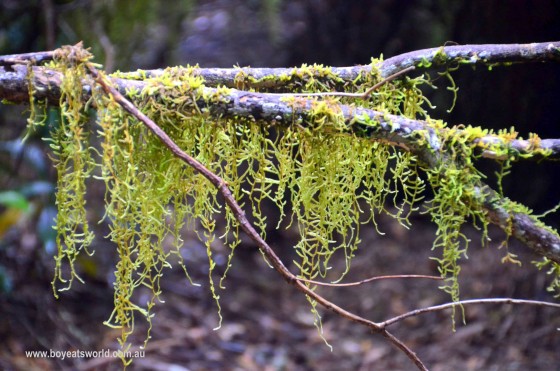 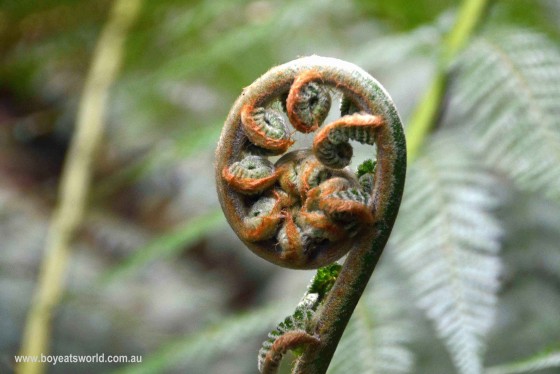 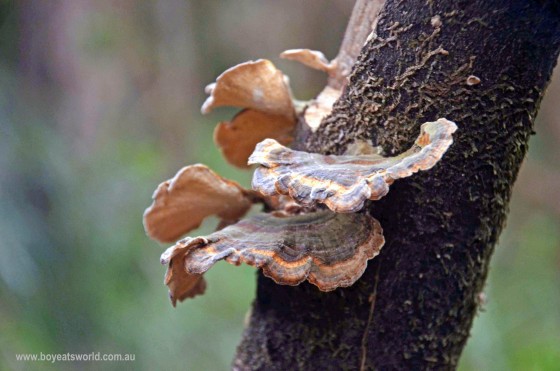 The effect is so magical that I half expect Gandalf to appear. 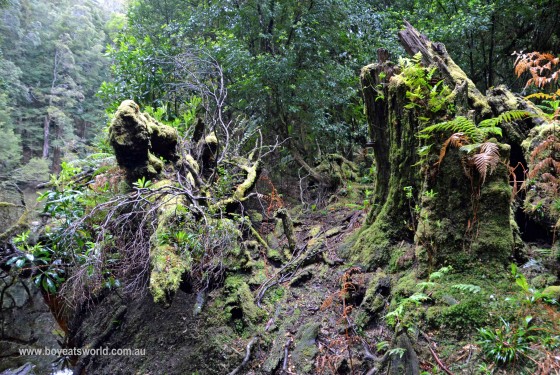 All that fresh air – it is said to be the cleanest in the world – is enough to make a person hungry, so it’s no surprise that the Tannin Restaurant and Tarkine Hotel form the hub of the tiny town. Local wines, beers and ciders are served at the bar and the restaurant (open for lunch and dinner with breakfast packs available) pays homage to the best Tasmanian produce and herbs, like lemon myrtle, collected from the surrounding wilderness.

A plate of braised wallaby shanks, a first for me, is a tasty surprise. 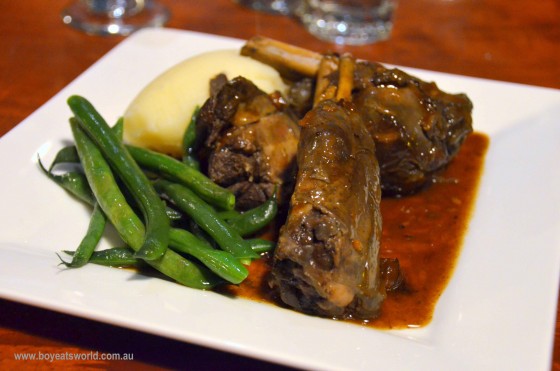 Though, I do have trouble making eye contact with its cousins, the pademelons, as I waddle back to the cabin.

Getting up at dawn is something that is usually accompanied by moaning complaint in our house. But in this neck of the woods, dawn is where it’s at! 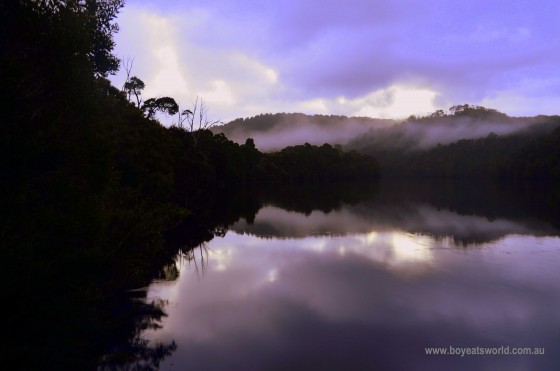 Each morning an ethereal fog silently entwines itself in the treetops above the Pieman River, its glassy surface reflecting the misty action on the water. It could only be more perfectly pretty if I could Instagram it. Sigh. 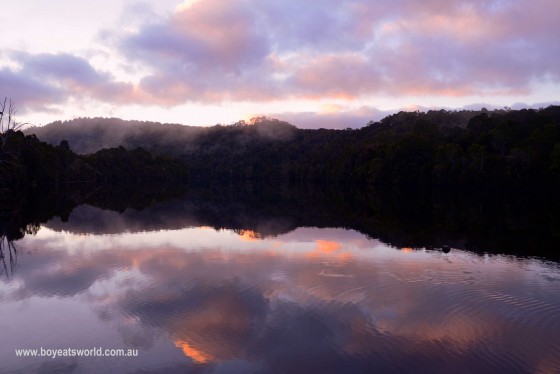 We spend a day aboard the Arcadia II. Built in 1939, it’s the only Huon pine river cruiser still operating anywhere in the world. We meander along the river past waterfalls where water tumbles down moss covered rocks, through luscious-leaved ferns and thousand-year old trees. 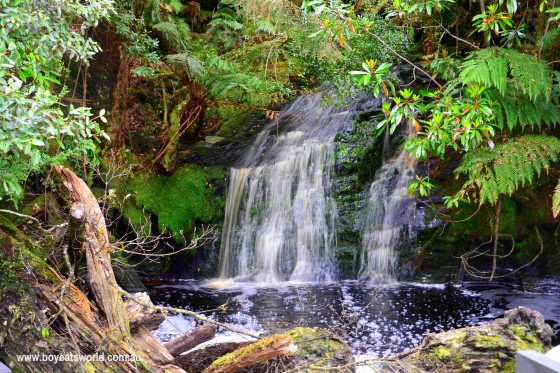 Until eventually we reach Pieman Heads, a place where the cantankerous Southern Ocean crashes into the river with calamitous gusto. Just ask the numerous ships that were wrecked there. We clamber ashore with a picnic lunch and wander past ramshackle cottages and “gum” trees. 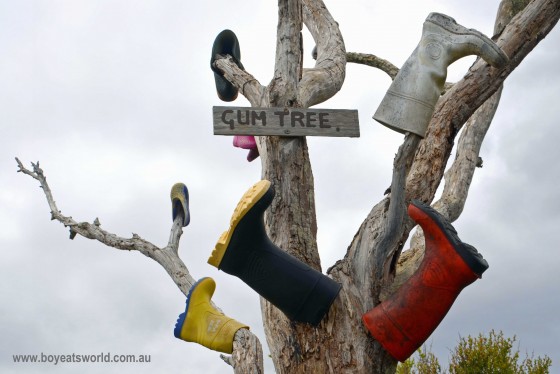 Our walk takes us through an ever changing landscape. 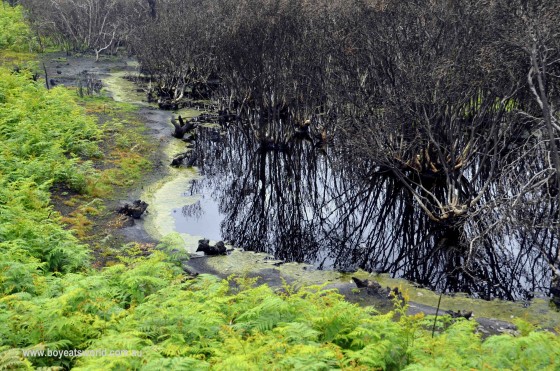 One minute its lush and alive the next desolate. 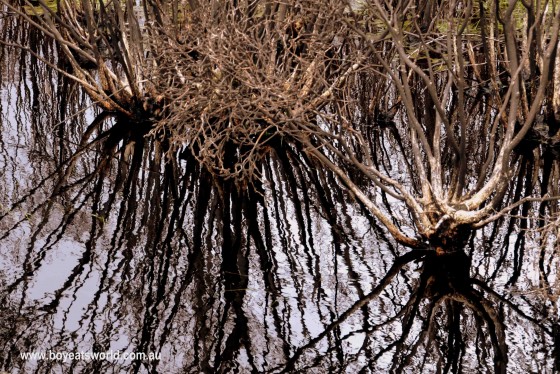 But it is always stunning. 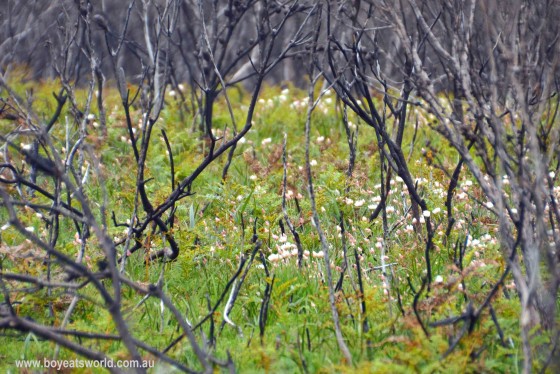 Finally we reach the beach, strewn with thousands of driftwood logs. 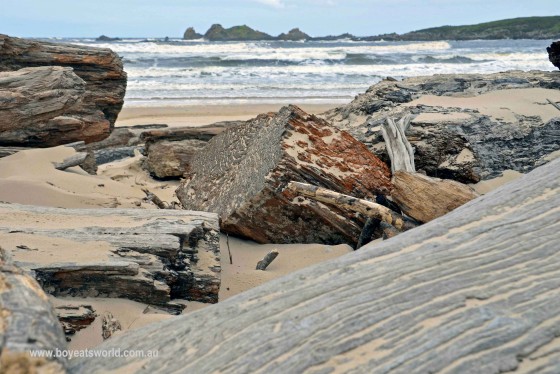 Scattered this way and that by the giant waves, its beauty almost post-apocalyptic.

We paddle kayaks up the Pieman to the Savage River, which is anything but. 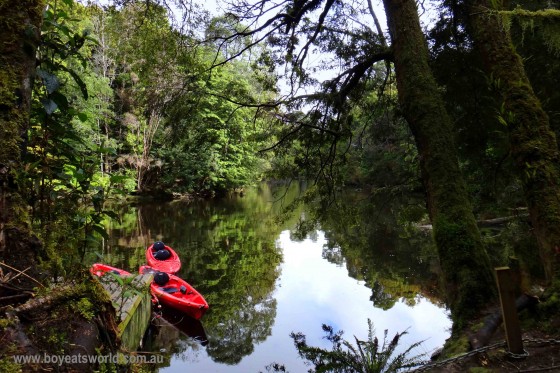 It is still and quiet in the morning, the mirrored surface of the river broken only by our kayaks cutting through the water and the jagged remains of a 19th century steamship that poke through the tannin-stained water. We build our appetite walking up and back through the spectacular rainforest. 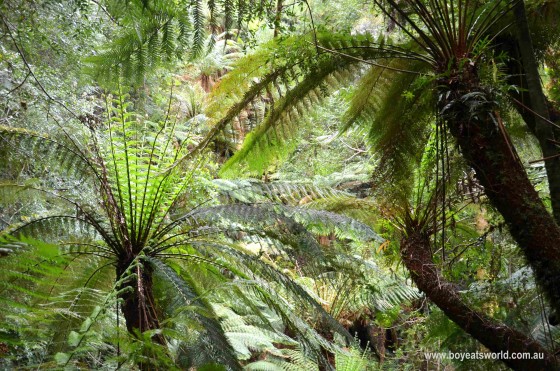 Finally we reach the retreat where a lunch of succulent Cape Grim steak sambos and the end of our trip awaits. Sated and relaxed, though sadly devoid of any gold nuggets or extinct animals, we prepare to return home and back into the loving arms of my iPhone. Though I may need to make a quick stop for supplies to appease my new non-digital addiction, choccie raspberries! 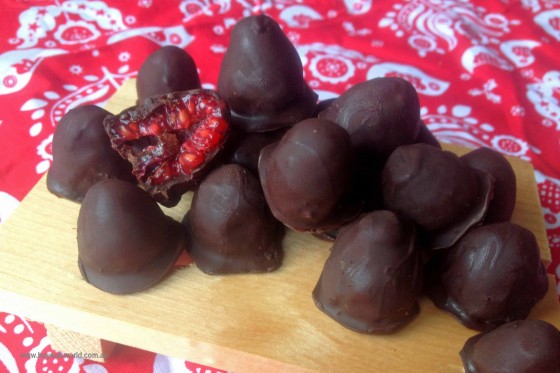 Note: Don’t use frozen raspberries for this recipe as any liquid can cause the chocolate to seize. The finished product will keep in fridge for up to a week.