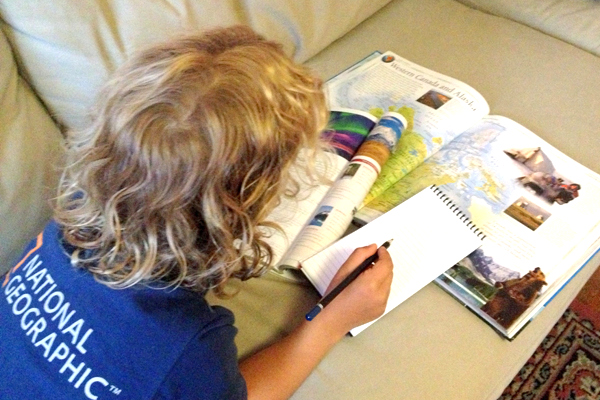 Freelance writing has a tendency to be feast or famine. Some months the most I get to write is a shopping list while others are flooded with work. This month it’s a virtual tsunami and I’ve got to knock over almost 60,000 words in four weeks. Whilst parenting two small demanding nutjobs. Without a net.

I’m yet to find out if that is even possible as I’m foolishly procrastinating by writing this blog post which will add another 800 or so words to the word count. One project that I’m particularly excited about has me exploring (through research) and writing about 64 different destinations around the world. I’ve already traversed South America and much of Asia and am writing this while I take a break from extolling the virtues of Alaska.

For this I blame the aforementioned nutjobs.

You see my biggest little explorer has been both horrified (because I’ve been missing out on all our family weekend fun) and fascinated by the mounds of research and writing  I’ve been doing, and has spent so much time leafing his way through my piles of travel books and brochures that his converse clad feet are itching!  So much so that just as I was about to paddle board through a sea of icebergs in Alaska’s Inside Passage, Raffles handed me this… 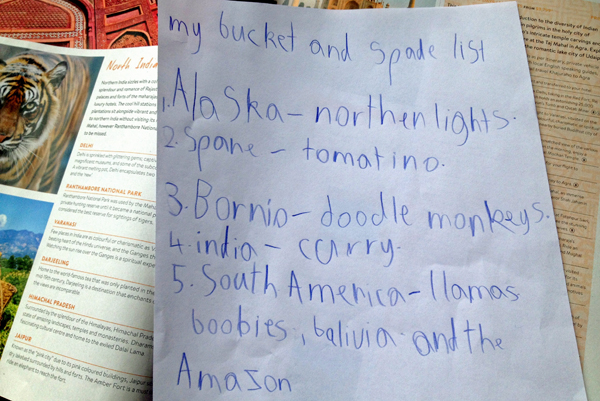 This is a list of five very important additions to his hilarious “bucket and spade list”, something that I’d almost forgotten about but which you can read all about here. Raffles original list came about after he’d heard the ubiquitous term – sans spade – in conversation, and decided he had to have one. Though his lacks the latter’s morbid connotations and is a list of things he wants to do before he grows up.

Despite his previous concerns about his bucket leaking, two years after creating it nothing seems to have spilled out. Not only can he remember each inclusion clearly, he still wants to do everything on it, with only one small exception. You see, at the age of six he thinks it would be simply ridiculous to climb the Eiffel Tower dressed as Spiderman. “I want to climb it dressed as a Ninja and I’d like a charcuterie board with my cheese when I get to the top.”

Now with his trusty Atlas by his side he’s mapped out five new destinations to add to his list and I, being a curious writerly type, simply had to ask why. His answers…

Alaska – “Because I really, really want to see the Northern Lights because they look like magic. I also want to meet a moose and see some polar bears, as long as they don’t eat me.”

I concur, Raffles. Being brutally devoured by a polar bear would be a bit of downer.

Spain – “Only because I want to go to the Tomatino festival to get splattered. I’ve had plenty of practice now and it would be so fun to smash you and daddy in the face with tomatoes”.

Nice. But I suppose it is our turn for a bit of vegetable based physical abuse. But bags not doing the laundry afterwards.

India – “Because food, mama. I mean, they’d have so much curry there and I love all the Hindu Gods… especially Hanuman”

Indeed food. And flying monkey Gods. When do we go?

Borneo – “I want to see the cute monkeys with doodles on their faces. And orang-utans too mama, because they remind me of you.”

Right! And your hirsute orange-hued mother wants to spend the afternoon listing you on ebay, son. Oh, and I’ve been there, so can confirm that they’re actually called Proboscis monkeys.

South America – “I’d like to go to Peru to hang out with llamas and eat ceviche and also to that weird place in Bolivia that looks like outer space. And to the Galapagos Islands to meet a blue footed boobie because they’re cute and they’re called boobies. But mostly I want to go exploring the Amazon to see cool animals and discover a new civilisation of people who will give me gold and make me their King.”

Two cute little ears attached to an even cuter curly little head had been listening in on our conversation and Sugarpuff too is soon pleading to be let in on the bucket and spade list action. I asked her to write down the five places she’d like to go. So she did. 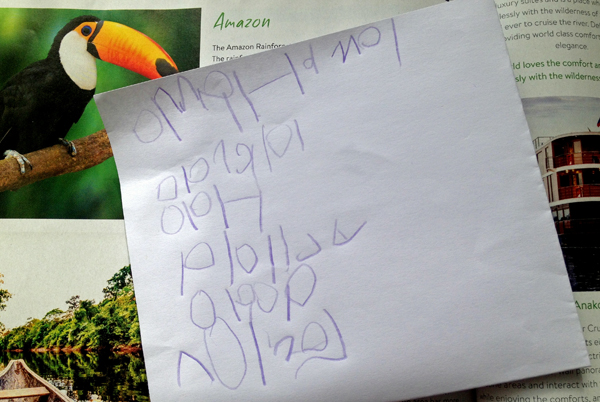 Fortunately she’s able to translate her three-year old hieroglyphics into the Queen’s English.

Given her age and the fact that she’s currently clad in an ensemble of a purple tutu, candy striped leggings, dragon wings, baby Blundstones  and tattoos she’s inked on herself with biro, I’m pretty much expecting her list to be a rainbow hued list of candylands, fairy parks and quite possibly a little bar hopping on the back of a Harley with the Hells Angels.  But I was wrong.  She’s got far bigger plans…

Arendelle – “I want to go to Arendelle to visit Elsa and Anna, mummy.  You know we can because they’ve opened up the gates for ice skating.”

Of friggin’ course! And yes I know they opened up the gates because I saw it in the movie too. About 85,000 times. Hopefully they have a bar with frozen margaritas. If not, the talking snowman gets it.

Amazon – “I want to go to the Amazon with Raff. They have anacondas there you know, mama. I think I will take my pink handbag to put treasures in.”

I suppose if one is going to trek through unexplored snake-filled jungle, one does need to accessorise.

Africa – “Because there are loads of big kitty cats and doggies there and I could pat them”.

Yes, yes you could. And the “kitty cats” could rip your arms and legs off whilst the doggies, or hyenas as they’re known in those parts, laugh uproariously.

Japan – “So we can buy more of those green Kit Kats that I like”.

Ever the consumer! But good thinking, Sugarpuff. I’m with you on the Green Tea Kit Kats.

This too is a lovely idea little one and quite probably the only realistic possibility on your list.

Do your kids have a bucket (and spade) list?