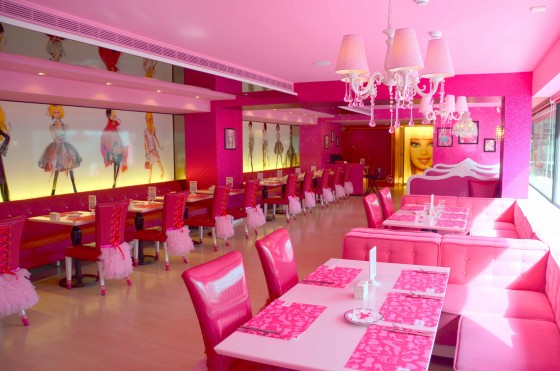 As a child I, like most little girls, had a Barbie. She was tall and pert and pretty with her drag queen make-up and big bouffy head of blonde hair… which I hacked off before brutally mummifying her anatomically impossible body in small strips of gauze for a school project on Ancient Egypt.

Suffice to say I’m not, and never really have been, a Barbie Girl. In fact, you might almost say I’m the anti-Barbie. I mean, I’ve only ever had the one career and the content of my wardrobe is so black that Goths stage interventions to get me to wear a little colour. My dream home décor would more likely be influenced by the Addams Family than Barbara Cartland and I’d rather tear up the streets in a rally car than a pink convertible. And, sorry Barbie, but I think Ken is a bit of a schmuck. And not too much fun in the trouser department, I’d wager.

Then there’s the glittering trail of pink that seems to follow wherever her tiny, tiny feet take her. Anyone who knows me would know that pink isn’t really my colour. And by “not really my colour” I mean the sight of it brings me out in hives.

Thankfully my baby girl, though duly embracing ribbons and tutus, shares my disdain and would rather rock a nice leopard print or bolshy ruby red than that girliest of girly hues.

But then again she’s only two and I have no doubt that somewhere in the not too distant future a crushing avalanche of hottest fuchsia will swallow my world. Until then, I avoid it. Much like one would the plague.

Which is why, my family and friends almost needed to be hospitalised from the shock when I informed them that, while on the hunt for kid-friendly haunts in fabulous Taiwan, I’d surfed an outrageously girly wave of retina-searing candy pink into Taipei’s Barbie Café. 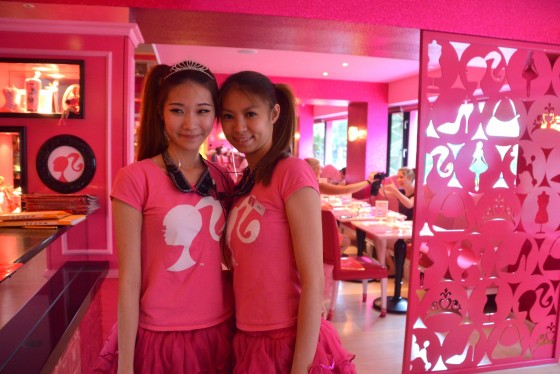 Though initially I’d assumed that five minutes of the glittering ocular onslaught would cause such terror to my black-clad self that it could be defined as torture under UN conventions, I was wrong. Truth be told, I kinda liked the place! 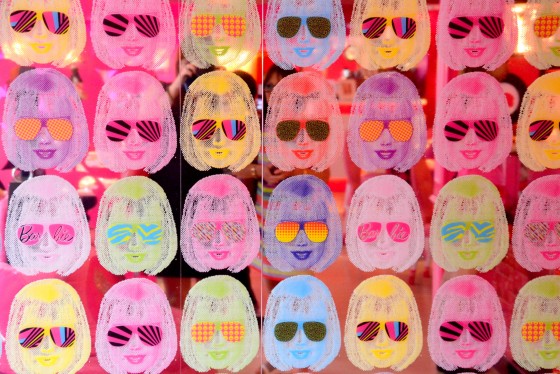 With quirky theme restaurants all the rage in Taiwan, and its capital city the place that the now 54 -year old Barbie (just quietly, I reckon she’s had a little work done) was originally manufactured, it’s no surprise Taipei was selected to be the home of the world’s first ever officially official Mattel-licensed Barbie Café.

The interior of the sprawling café on Zhongxiao Road, one of the busiest shopping districts in Taipei, is really something. I’m not sure what exactly, but that something is pink. Very, very pink. 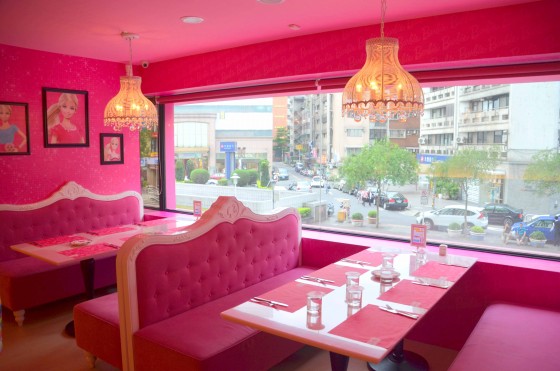 Gallons of neon pink paint, reams of soft pink tulle and a generous dollop of glitter covers floor, walls, ceiling and every available surface between. 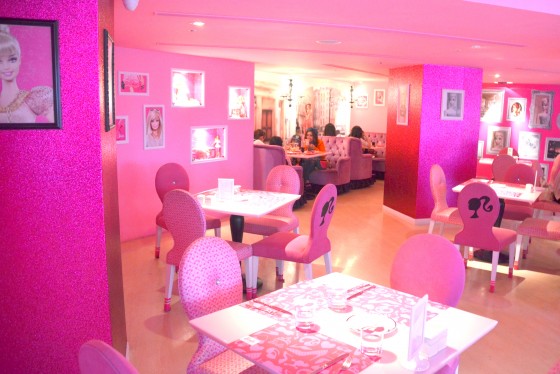 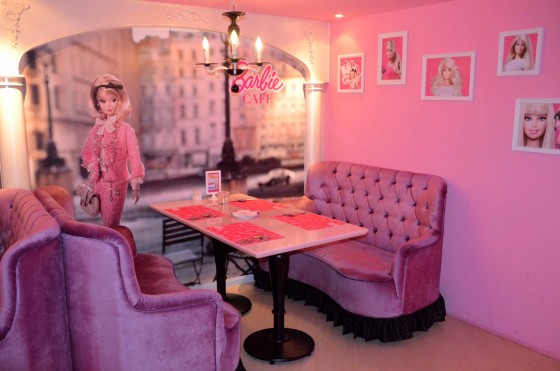 Chairs are clad in hot pink vinyl corsets, tutus and, for reasons I can only imagine, pink bobby socks. 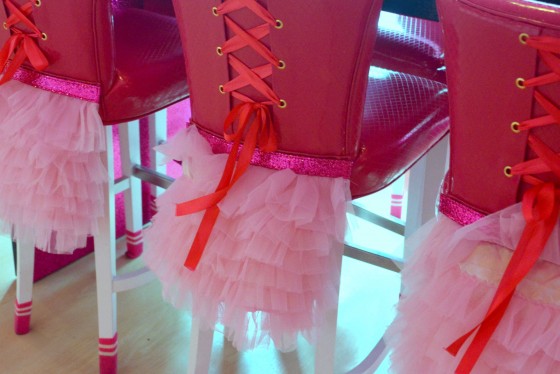 The hot pink walls are adorned with framed images of some of Barbie’s finest fashion moments and an impossibly huge portrait of the iconic blonde is the centrepiece of the quirky café. 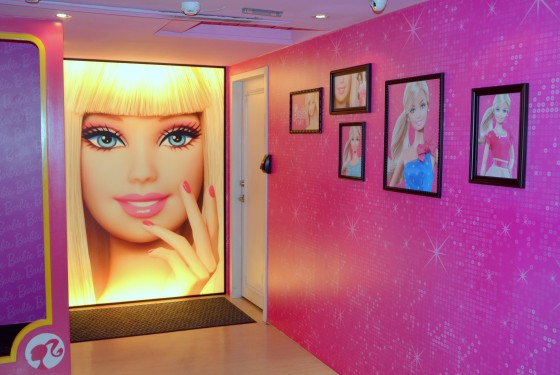 There’s also a gigantic Barbie box for customers to sit in if they’d like to become a packaged, life-size Barbie. The place is so sugary sweet it probably wouldn’t be a bad idea to BYO insulin.

The menu too, is dripping with pink. 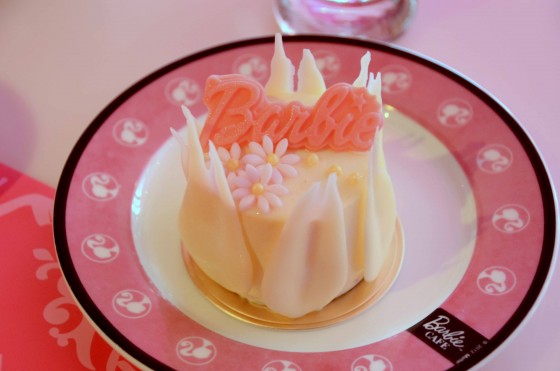 And though Barbie’s sylph-like waistline might suggest she hasn’t been indulging herself on the selection of eye-catching pink-iced cakes, Barbie macarons or sticky sweet pink drinks served up by the tutu and tiara clad wait staff, I most certainly did. And they tasted, well… pink. 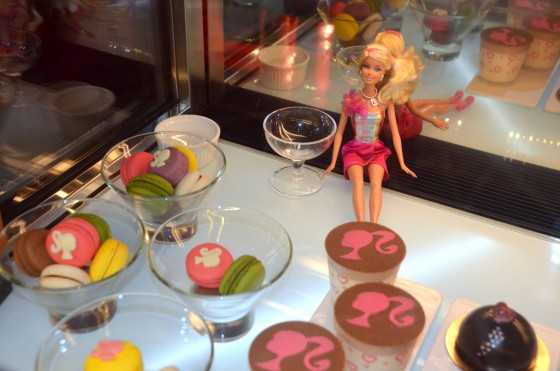 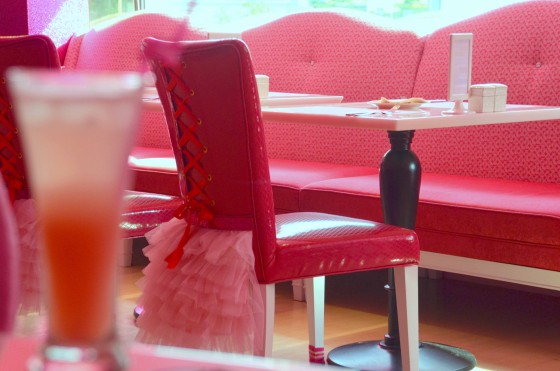 I should add a warning that the mirrored walls and doors in the ladies toilets can be a touch overwhelming if you aren’t prepared for them. A male member of my travelling party is probably going to require years of therapy after his trip to the men’s room where a grinning Barbie stared intently at him over the urinal. 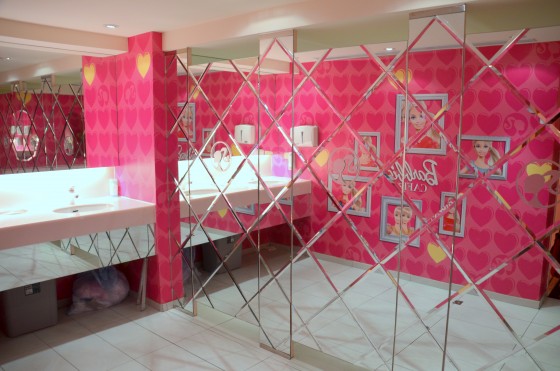 Would I recommend it? Hell, yeah! The café that is, not the urinal. It’s a palace of pinkly perfect kitsch and I couldn’t wipe the smile of my face while I was there. The place is pure pink frosted fun and a fantasy come true for most little (or big) girls. And though I did love it, not being most, or particularly normal, I confess to rushing to Taipei’s Ninja Restaurant immediately afterwards… for a wee dose of darkness. 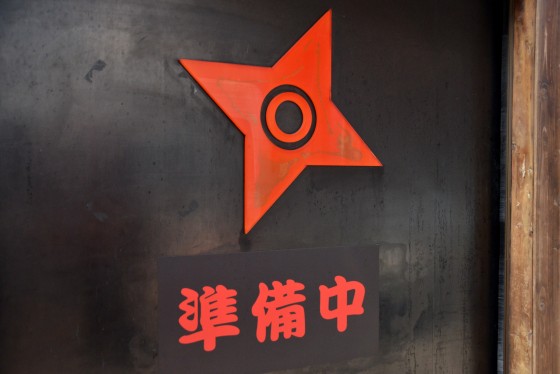 Sadly, after infiltrating the Ninja Lair (and by infiltrating I mean pushing open the unlocked front door and casually sauntering in) we discovered an empty restaurant with lights off and a bunch of sleeping blokes in a semi-darkened room who didn’t even stir at our cries of hello! We left having out Ninja-ed the Ninja. They may want to rethink their career choice.

Still enveloped in the pink bubble of our Barbie bonanza, we weighed up the other options left in our novelty restaurant arsenal. But the airplane themed A380 Restaurant seemed a bit superfluous as we were on our way to the airport for a 10-hour flight home, and I couldn’t see the appeal of the infamous Modern Toilet – a nationwide restaurant chain where the seats are toilets, food is served in miniature toilet bowls and the chocolate soft-serve is shaped to look like, well… crap, so we called it a  glittery day.

Call me crazy but I’d rather eat from a nice sanitary fuchsia plate in the company of my new BFF, Barbie, than down my meal from a miniature urinal any day!

So, If you ever happen to find yourself in Taipei (with or without the kids in tow), I highly recommend you don some protective eye wear and head straight for The Barbie Café where, to borrow the words of late gonzo great and bona fide tripper, Hunter S. Thompson, you should “Buy the ticket, take the ride… and if it occasionally gets a little heavier [or in this case pinker] than what you had in mind, well… maybe chalk it off to forced consciousness expansion.”

22 Comments on Tripping the light fanplastic in Taipei