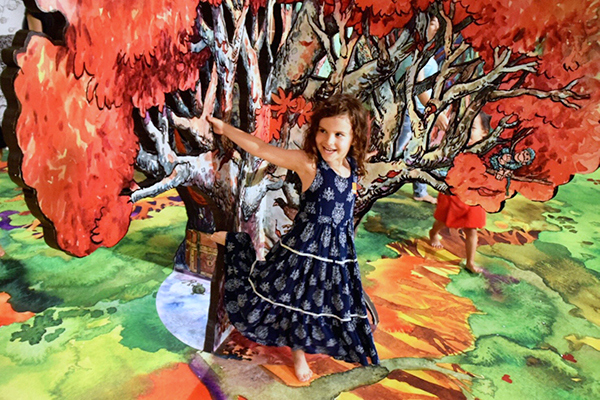 When I ask Raffles and Sugarpuff if they would like to spend the afternoon visiting an exhibition at Singapore’s ArtScience Museum, the answer is a definitive, “no”. And I get it, I really do.

I mean, with so many epic activities to be found when travelling in Singapore with kids, like wakeboarding at Singapore Wake Park, mountain biking at Ketam Mountain Bike Park in Pulau Ubin, as well as all those kid-friendly theme parks and attractions on Sentosa beckoning to be visited by my adventurous offspring, I’m not exactly shocked by the reaction. But, given I am a heartless and cruel mama, I take them anyway. Because art!

Despite all the whinging and whining about boring museums I am required to deflect on the way, I am happy to report that, as always, mama knows best.

Not only did the the air-conditioned Future World: Where Art Meets Science at Marina Bay Sands’ ARTScience Museum provide us all with a break from a hot and humid Singapore day, it’s so much fun they refuse to leave until we are forcibly removed.

The exhibition, created in collaboration with Japanese art and technology collective teamLab, FutureWorld takes up nearly a quarter of the museum’s total gallery space with 16 cutting edge digital art installations creating what is, in effect, Singapore’s largest digital art gallery.

The result is so magical that my two little space cadets are enchanted by the interactive technological wonderland from the moment they walk through the door. 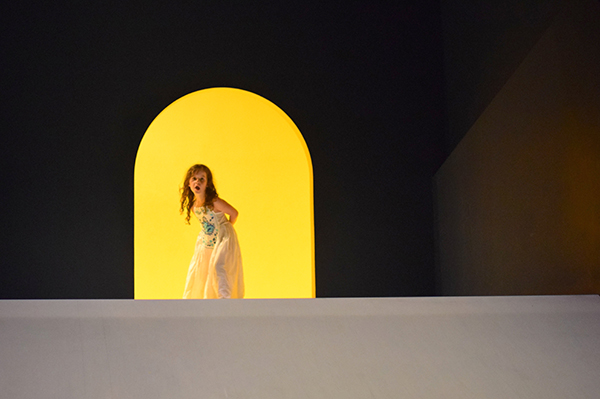 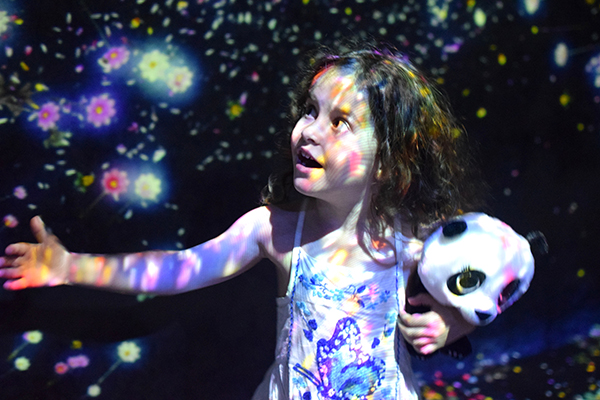 They fly down the slide into Sketch Town, several times over. 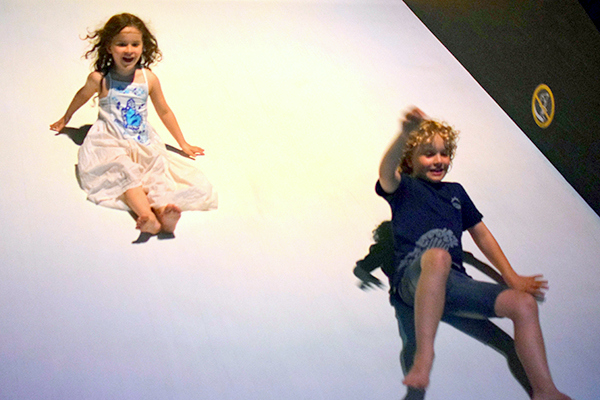 Then they head to the drawing tables to create crayon masterpieces, which they scan on a simple to use digital scanner. 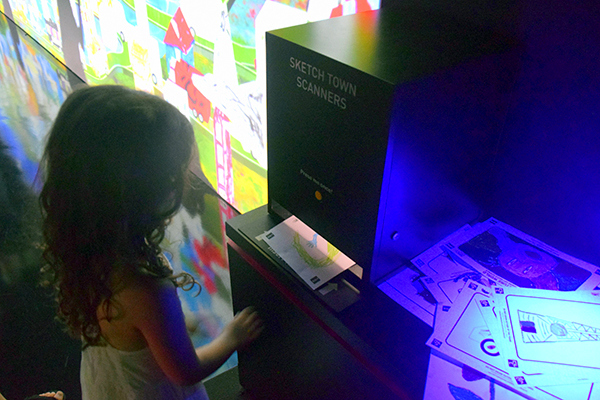 Then they step back and watch as their creations became animated and shuffle their way onto a giant ever-evolving artwork, weaving their crayon way between recognisable landmarks such as the Merlion and the Singapore Flyer, dodging the spaceships and cars along the way. Their scanned images also become a paper model kit so they are able to recreate 3D Models of their creations. 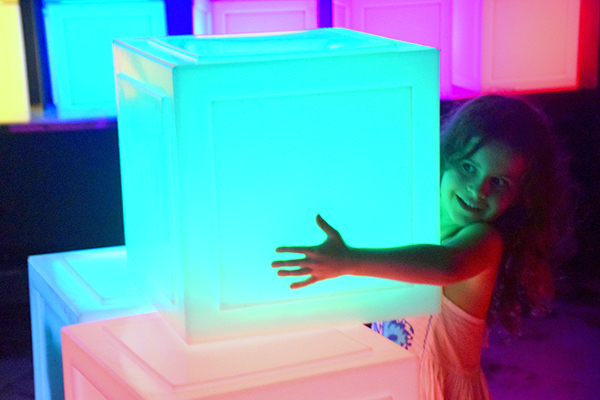 Raffled and Sugarpuff lose themselves in an exceedingly modern, make-believe world as they create colourful constructions with giant light cubes, play hide and seek with little people and stand under a stunning digital waterfall, before bounding into the next installation, Park. 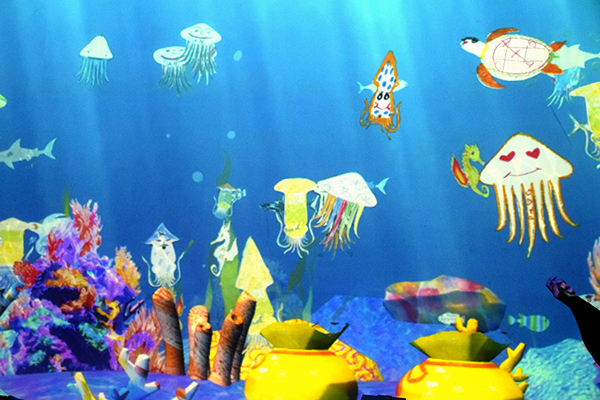 Here they find a sketch aquarium where they create and scan jiggling Jellyfish that wiggle their way across a giant aquarium screen, before bounding into a massive pit of enormous bouncy glowing balls that they roll, bounce and throw with unrestrained abandon. 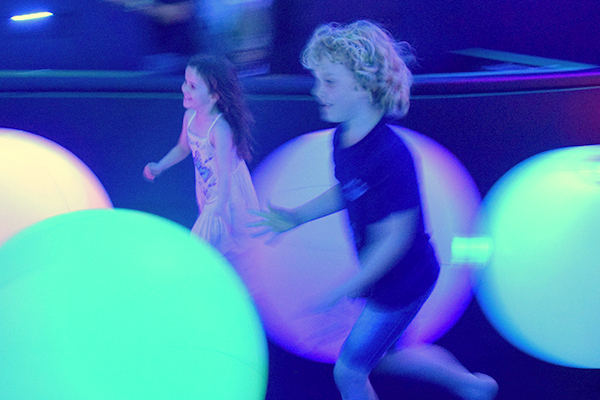 The kids are eventually convinced to exit (by security at closing time) on a glittery high through a final installation, Celestial Space, and its crystal universe of 170,000 incredible LED lights that create the illusion of stars moving through space. 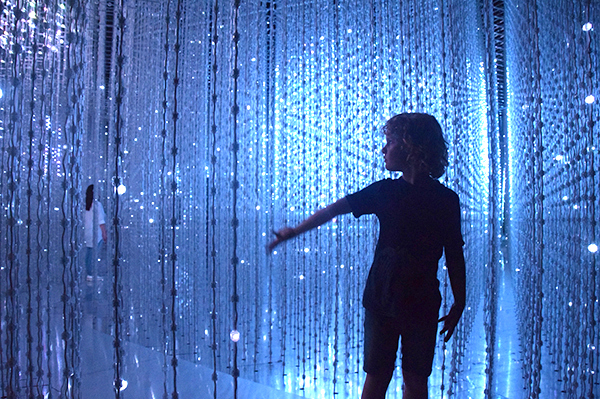 But it’s not all reserved for the museums. As we explore the city we see surprising street art in Haji Lane. 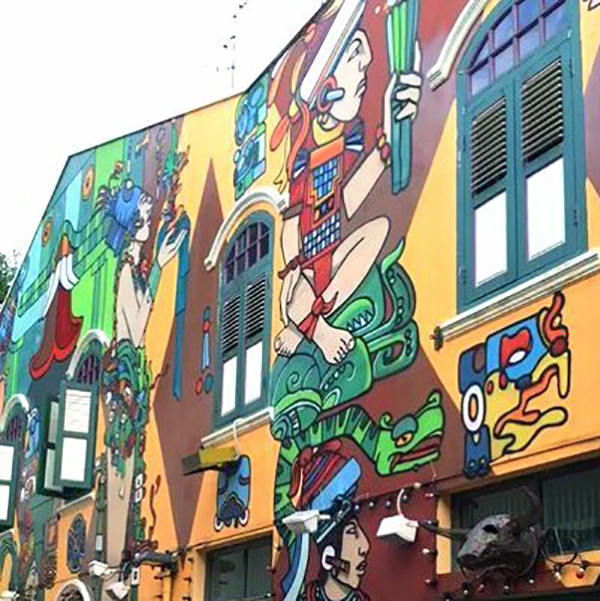 And play under the shadow of quirky installations in Little India. 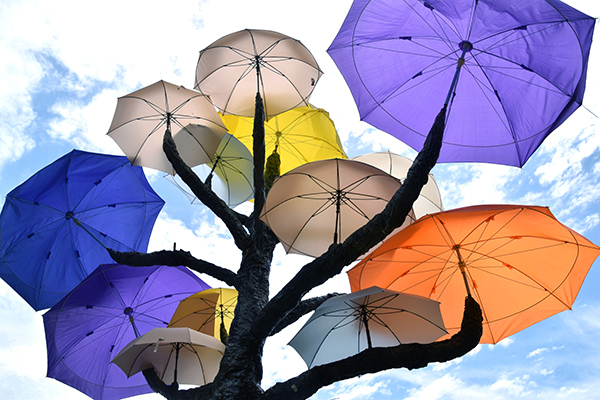 The kids are even lucky enough to watch on as artisans sculpt statues of Hindu deities in a stunning temple we stumble across. 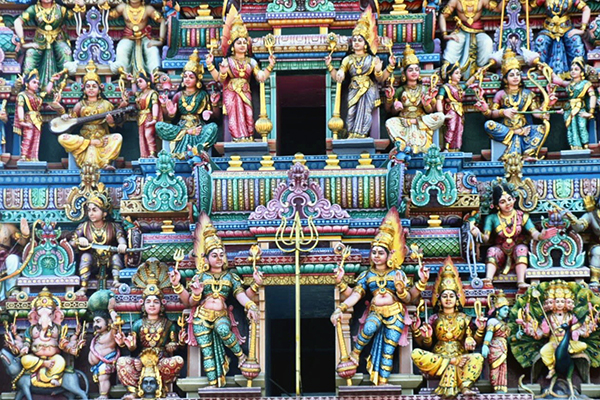 And they love it all.

Needless to say there are zero complaints from my newly minted culture vultures when I propose another gallery visit, this time to the National Gallery Singapore.

The brand new multi-storey gallery, built to celebrate the 50th anniversary of Singapore in 2015, is housed in the restored former British colonial-era Supreme Court and City Hall buildings, and is the largest public display of modern Southeast Asian art in the world. 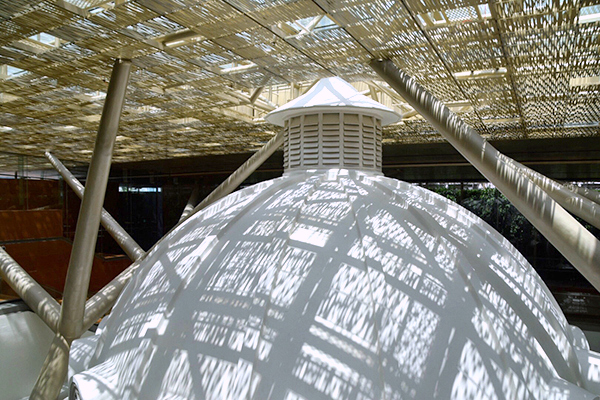 The buildings themselves are such incredible works of art that they illicit awestruck oohing and aahing from my tiny travellers. And the collection of modern art from the 19th century to the present day is endlessly fascinating. 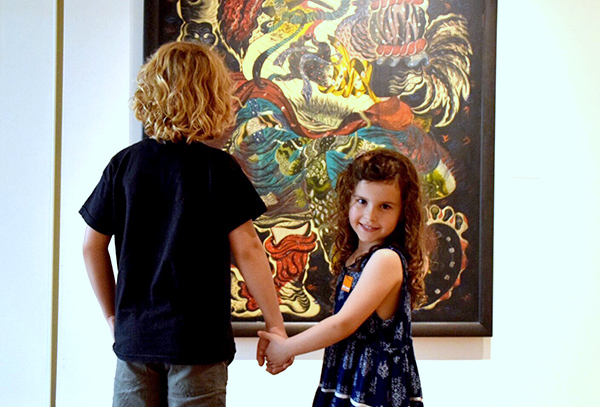 We are warned about potentially sensitive content on race and religion, violence and nudity, but there is little that raises so much as an eyebrow – the kids too fascinated by the architectural domes, columns, cornices and bridges that crisscross the two buildings, and so desensitised by their mother’s long time love of renaissance and baroque paintings to be bothered by the odd boob or schlong hanging on a wall. 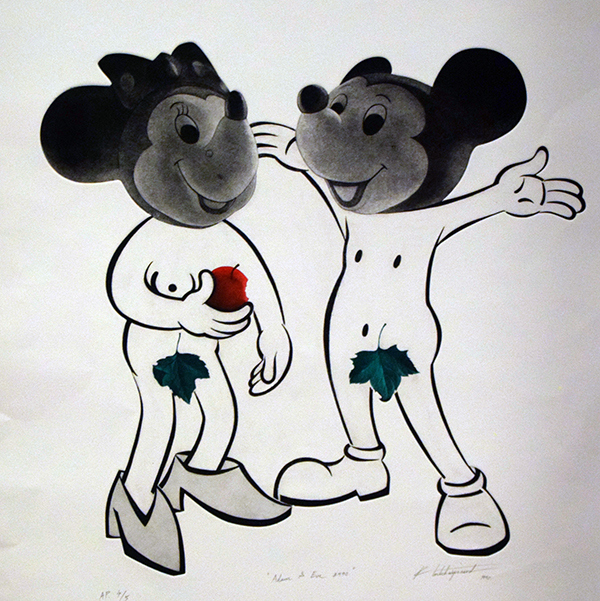 Raffles is especially enamoured with Forest Fire by Raden Saleh, an enormous detailed picture that has tigers leaping out of the canvas. 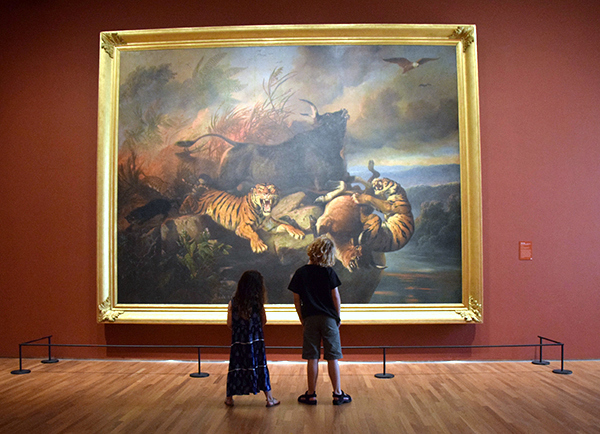 Sugarpuff’s tastes run more to the likes of the oozing bubble machine we stumble across in the stairway. 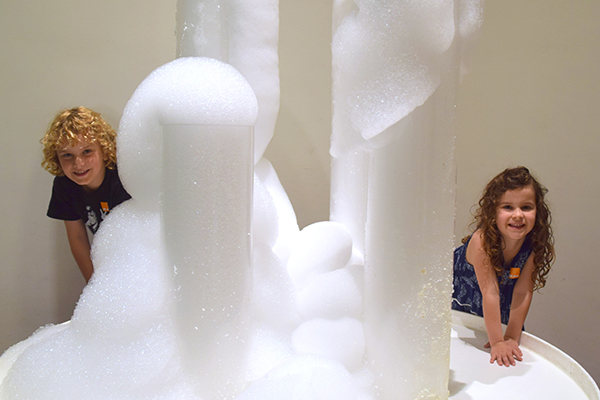 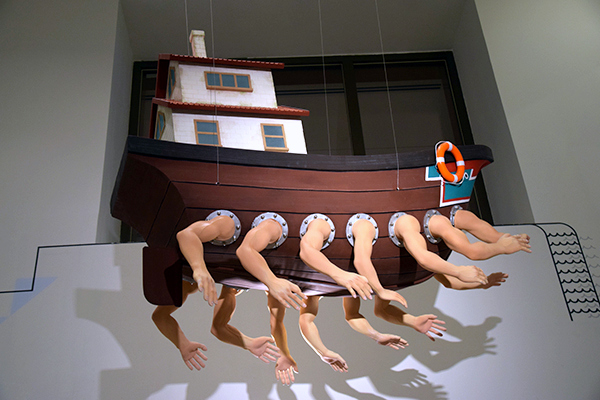 Each showcases curious artworks while inviting the kids to create and play, something my crafty Sugarpuff is more than happy to do. 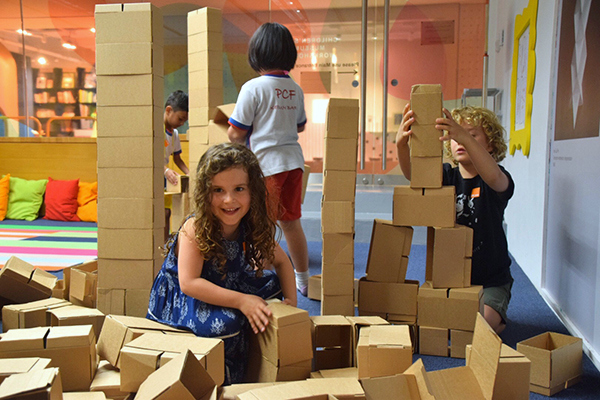 The highlight is a fantastical play area, The Enchanted Tree House, where the kids enter a 3-dimensial artscape and swing like monkeys through a magical painted forest, wrestling giant octopi in an illustrated sea and letting their imaginations run as wild as the illustrations surrounding them. 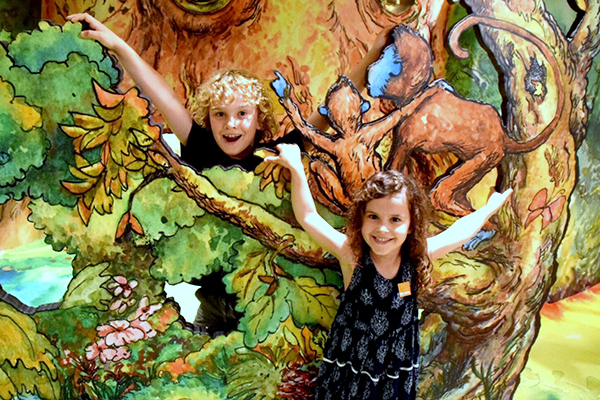 For more intriguing and unusual places to explore in Singapore click here.

Disclosure: The Eats Worlds were hosted at the ARTScience Museum and the National Gallery of Singapore, by Singapore Tourism. All opinions remain our own.

9 Comments on Art and about in Singapore with kids