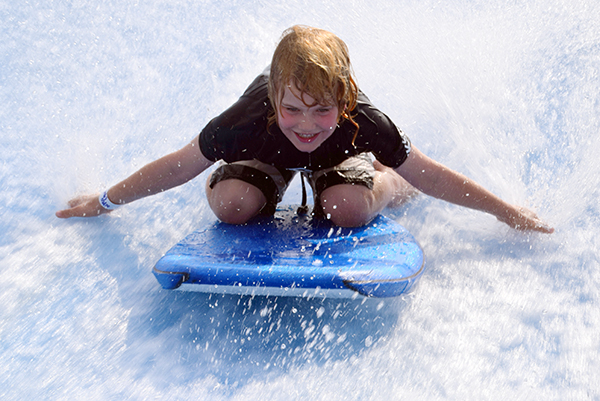 Singapore. It’s clean, efficient, safe and pretty much everyone speaks English. At least that seems to be what everyone keeps banging on about when it comes to why Singapore is a great holiday destination with kids.

In fact, “safe” is just about the last thing Raffles is looking for.

You see, my little foodie has turned adrenalin junkie and though stuffing his face remains his first love and travel priority, now he’s hit the ripe old age of eight, thrill seeking comes in at a close second.

Which is handy because it turns out that besides cleanliness, a predominantly English speaking populace and wads of fabulous food, there are loads of action-packed thrills and adventures in Singapore for kids. And ardent junior daredevil Raffles appears to be determined to take on each and every one of them!

But juggling his need to consume enough food to feed the entire population of a small country with his desire for heart thumping action means he can’t do them all. He has already taken years off my life on a previous trip when he took on the 450-metre long, 75 metre high zip line and simulated 15-metre parachute jump at MegaZip Adventure Park, and the high-speed Luge on Sentosa. So he’s after some new and interesting ways to scare the bejesus out of his anxiety-prone mother this time around.

With his crew of daredevil local buddies along for the wild ride, he doesn’t have to look far… 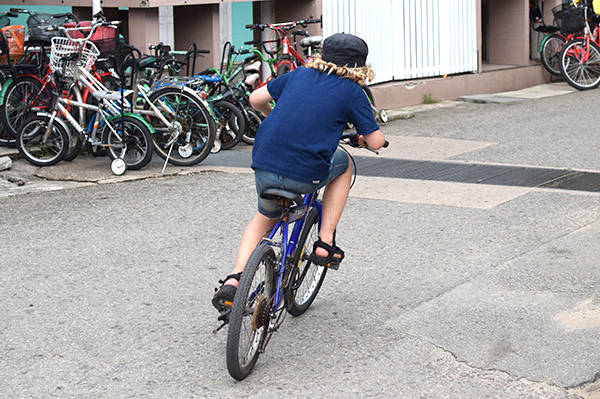 Living in a small apartment, Raffles doesn’t get much opportunity to ride his bike so was super keen to take the short bumboat ferry ride from Changi Point Ferry Terminal to Pulau Ubin and Ketam Mountain Bike Park. 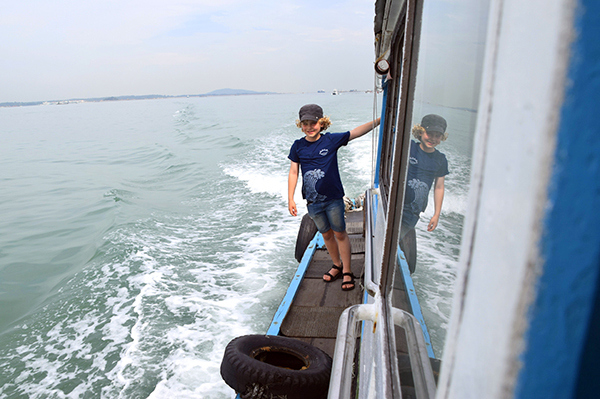 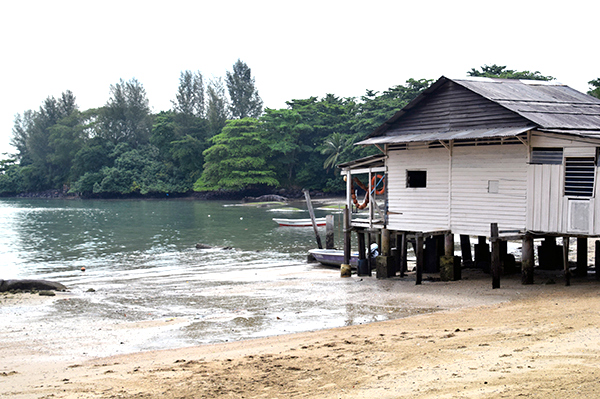 Along with an array of native wildlife, including wild monkeys, it seems to be a breeding ground for bicycles. Literally everywhere we look there are bikes! Mountain bikes, tandem bikes, tricycles. There are even bikes with little side carts. I think they may be designed for smaller kids, but they’re also quite attractive to lazy sods like myself. And they’re all available to rent for just a few bucks. 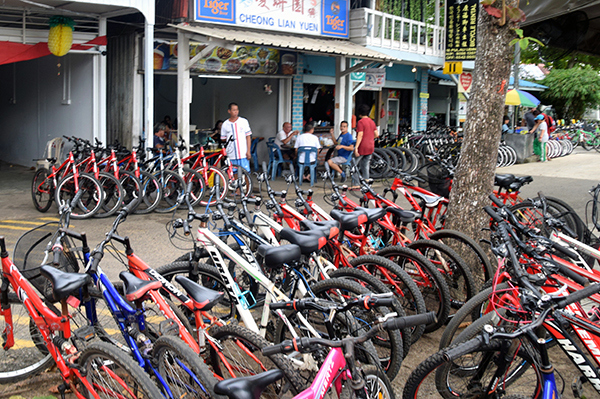 Sugarpuff and I decide though to sit this round out, the steamy tropical heat a little much for a jet-lagged five-year old who’d rather just play the afternoon away in the sand with her mama. 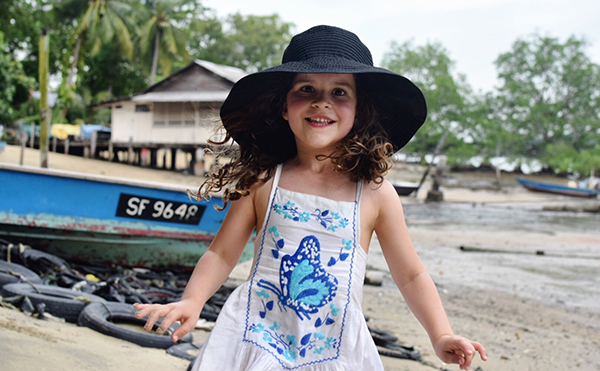 So we send Raffles off into the bush with the boys to zoom around the 10 kilometres of international standard Mountain Bike trails. Several hours and a very sandy Suagrpuff later, my beaming boy returns to us sweaty, flushed, and covered in mud!

I’m beside myself with parental angst when I see bloody scratches down his legs and arms, but Danger Boy couldn’t care a jot and beams as he proudly explains how, as he flew down steep hills past wild pigs, he fell off his bike three spectacular times. And how he loved it so much he’s ready to do it all over again.

Needless to say, I quickly escort him to the nearest bumboat before he can. 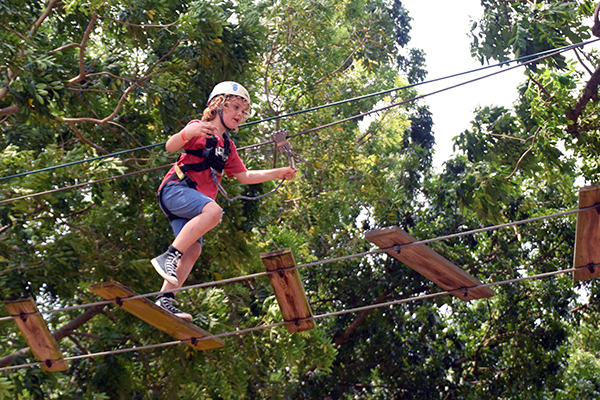 With a series of different obstacles from elevated bridges and swaying trapezes to wobbly logs, Tarzan ropes, zip-lines and hanging nets set high above the ground, a trussed-up Raffles is ready for action. After donning his harness, helmet and undergoing a compulsory safety briefing, my jungle boy runs and leaps through the trees like the monkey he is, while I keep my eyes shut and fingers crossed on terra firma and question why he can’t just choose something safe like knitting or making model aeroplanes as a hobby? 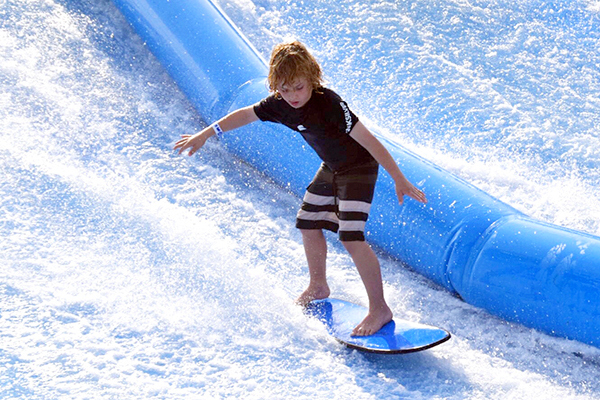 My wannabe grom has had a hankering to learn to surf for a while now, so the Flowrider at Sentosa Island’s Wave House was top of his must try list. And he takes to it like a (slightly wobbly) duck to water. Wave house has two surf simulators, one a flat double Flowrider and the other a flow barrel, which is definitely not for beginners. There’s also a swimming pool, surf shop, restaurants and bars. But they hardly get a look in as Raffles has eyes only for surfing.

Starting out on a boogie board, Raffles is soon jumping up on his knees to ride the waves, thanks to a really helpful instructor who is on hand to share pointers on how to move and balance. He’s masters the boogie board quite quickly, and gracefully rides the water … at least he does when he isn’t wiping out in spectacular, arse over tit style. But Raffles is a man on a mission and a few high impact stacks aren’t going to stop him, though they are causing his nervous mother to make a mental note to put the local emergency room number on speed dial.

Soon enough it is time to upgrade to a surfboard. The instructor helps Raffles get into position and find his balance then lets him go while I hold my breath. And like that my little dude is surfing! And in the magic of that moment he is so completely smitten with the concept that I have a feeling he’ll be putting in an order for his own surfboard this Christmas … and I’ll be putting in an order for an upgraded first aid kit.

Getting wet and wild at Singapore Wake Park 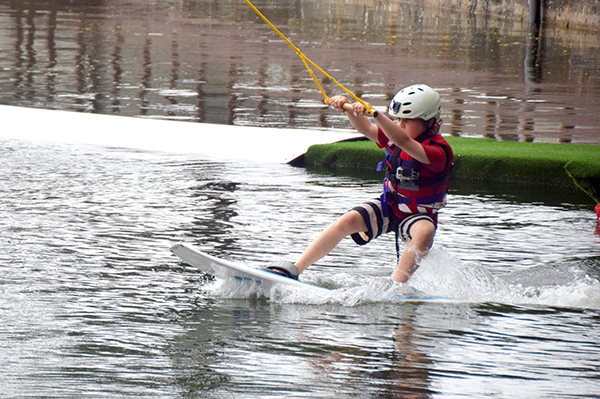 While his paranoid mama stands around worrying about him breaking a limb or drowning, and Sugarpuff collects sticks in the surrounding parkland to poke everyone with, Raffles is getting wet and wild on a wake board.

This one is special treat for Action Raff. Through a few “Insider” connections, he has been invited to a sneak preview of the soon-to-be-opened Singapore Wake Park, a cable wake park that amps up the adrenalin with wake-boarding, knee-boarding and water-skiing. The wake park provides all the equipment necessary including safety-vests, helmets, skis, kneeboards and wakeboards. Though I’m not sure that they stock a defibrillator, which his chicken shit mother will require if he keeps up with the extreme action man antics.

Raffles starts out on a kneeboard and nails it straight away, the beaming grin on his face saying it all. In no time he upgrades to a wakeboard and is managing to stay upright! He is having so much fun that he is distraught when the time’s up and declares that wake boarding is his “new favourite thing ever”. 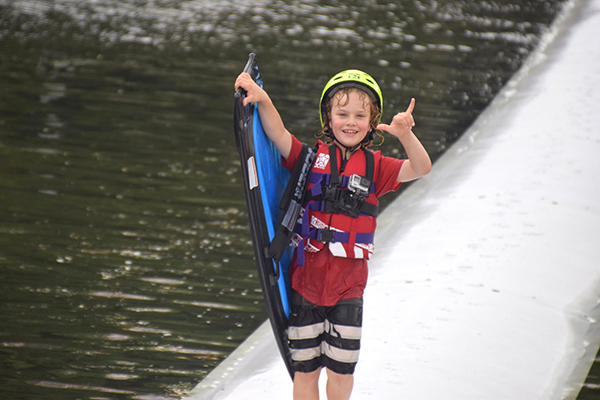 That is until he rollerblades to the neighbouring East Coast Lagoon Food Village and spots the copious array of seafood on offer. He soon begins working his way through a 16-course hawker market feast, revising his previous statement with a quick “Make that my second favourite,” when he comes up for air between a bowl of red-hot seafood laksa and a plate of spicy sambal stingray.

I think it is safe to say that eating will always be Raffles ultimate extreme sport. 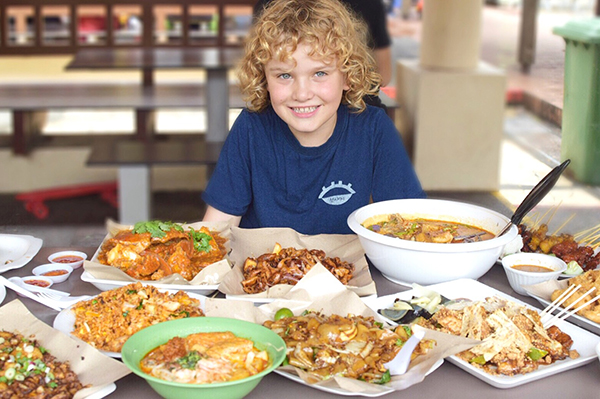 Disclosure: While Raffles was hosted by the various venues it was for his gig at Welcome TV and not for this blog. He just had such an amazing time he asked me to share.

16 Comments on Action-packed adventures in Singapore for kids