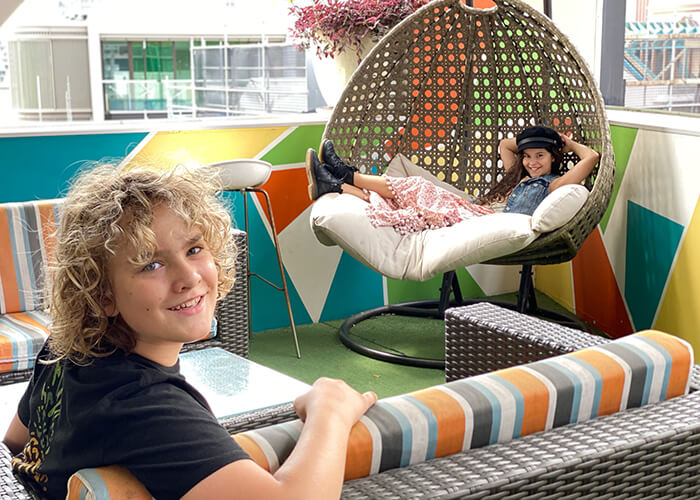 The Rocks has always been one of our favourite parts of Sydney. It doesn’t matter how often we visit Sydney’s oldest suburb (and we visit a lot), we never get bored exploring all the historic nooks and crannies of The Rocks. There’s always something on, something to learn or somewhere to eat.

So on our latest visit we decided to make a weekend of it. Only this time, when we weren’t eating our way through markets, hitting the harbour or getting arty farty in the galleries, we were busy getting our hostel on.  But not just any hostel. The incredible Sydney Harbour YHA, which I think has won almost as many awards as it has rooms. 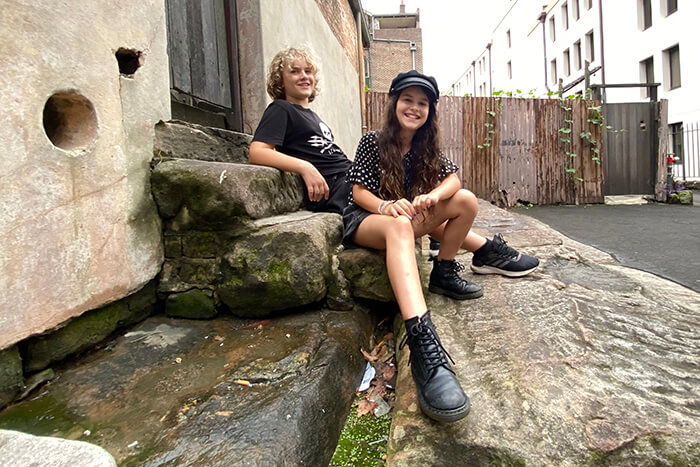 I totally get why. Not only does it boast the best location between some of Sydney’s finest  five-star hotels right in the heart of the city’s historic harbourside precinct, it’s actually been built above and around an archaeological site known as ‘The Big Dig”, one of the largest urban archaeological excavations in Australia,  which is pretty awesome! 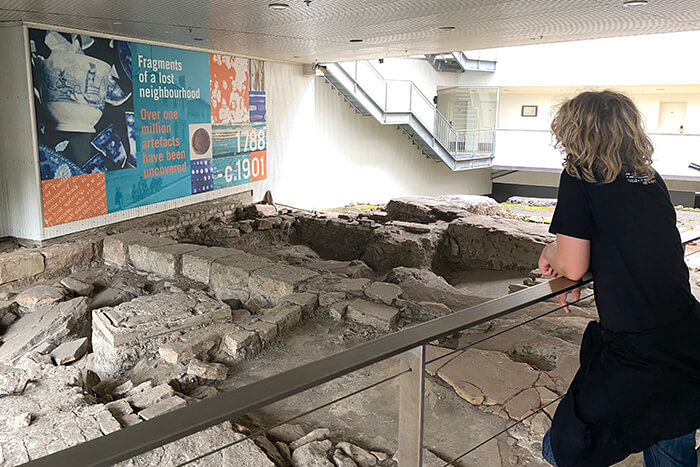 The excavations have uncovered the foundations of buildings dating back as far as 1795, as well as around a million artefacts, some of which are on display in the Sydney Harbour YHA to help teach visitors about Australian history. 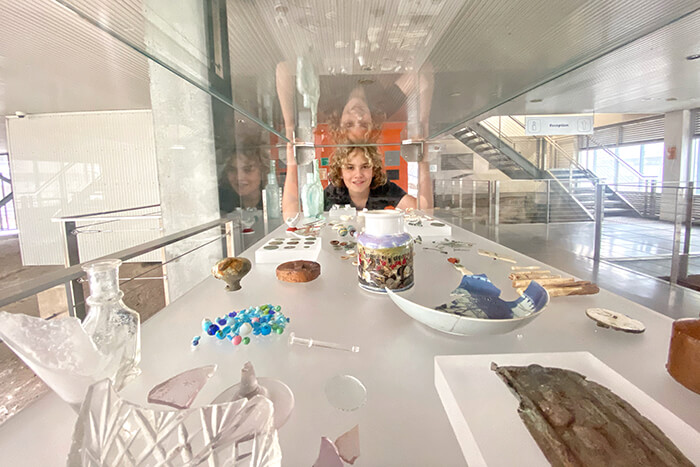 The Big Dig archaeological centre also offers school kids hands-on experiences on site and funds for every overnight stay provides for the ongoing conservation of the site.

Of course, the history of this area dates back way further than colonial settlement. The Gadigal people of the Eora Nation called this place home for thousands of years before European colonisation and you can join aboriginal guides to learn all about their heritage and spiritual connection to the harbour on a 90-minute Rocks Aboriginal Dreaming Tour, which can be booked at the tour desk.

Back to the awesome facilities at Sydney Harbour YHA. This place is amazing and not at all what I expected from a youth hostel. While we really like to mix it up with accommodation and are happy going budget or flying five-star when we’re travelling, we’ve never stayed in a hostel and I wasn’t sure what to expect. 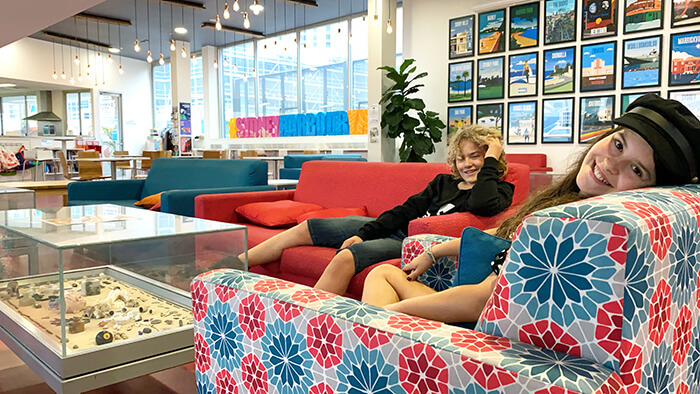 I think I was imagining that it would be more like the accommodation on a school camp. You know, lots of noise, tired and basic shared rooms, communal loos and not much more. But I couldn’t have been more wrong. This place is ultra-modern, clean and while sure, they offer four and six-bed co-living rooms and communal facilities, they also have really nice private rooms, like the ones you’d find in a pretty decent budget hotel, that wrap around the dig site. 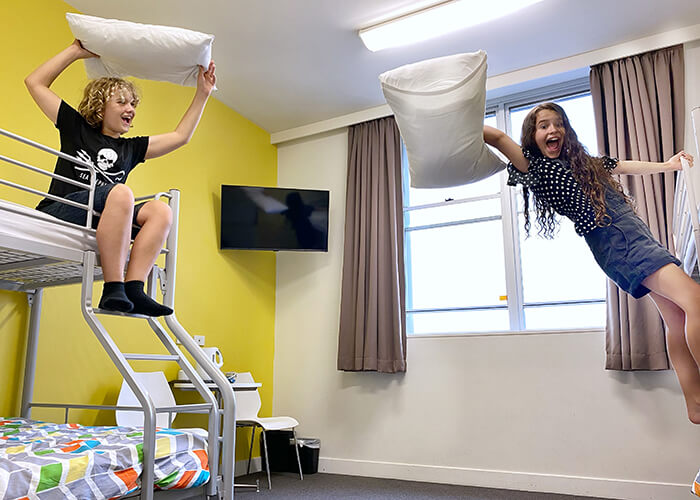 They even have family rooms. Our air-conditioned room was spacious enough for mega pillow fights and had a double bed and bunk beds that could sleep five, a desk area, plenty of cupboard space and a huge private bathroom that was wheelchair accessible and views to the opera house. 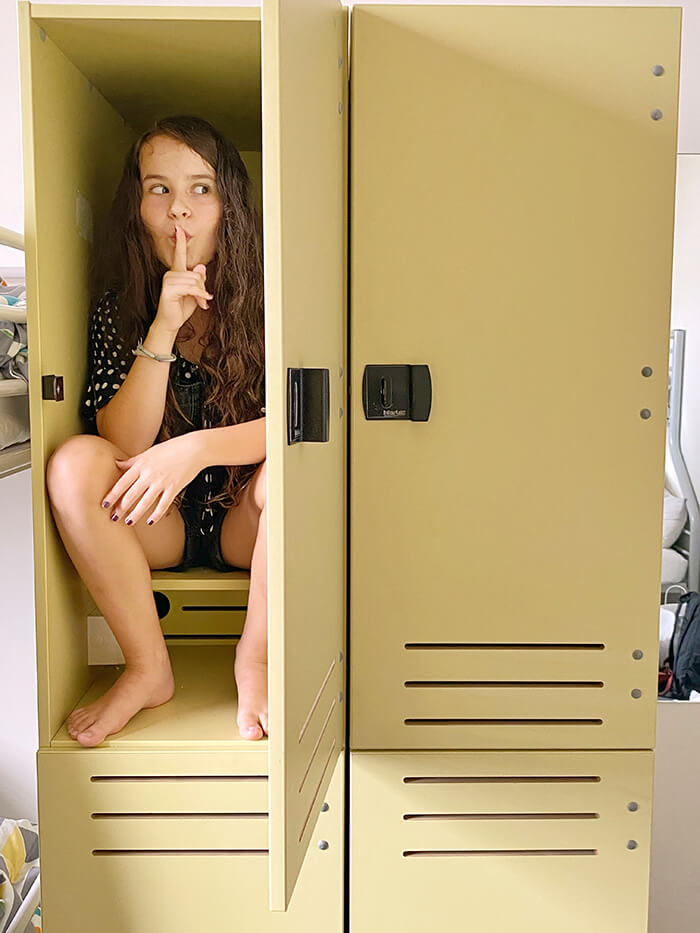 They supplied fresh bed linen, soaps, towels, plus there was a kettle with tea and coffee, free Wi-Fi and even a television. Not that we had much time to watch it because there was so much else to see, do and explore amongst The Rocks cobblestone alleyways, as well as at the hostel itself. 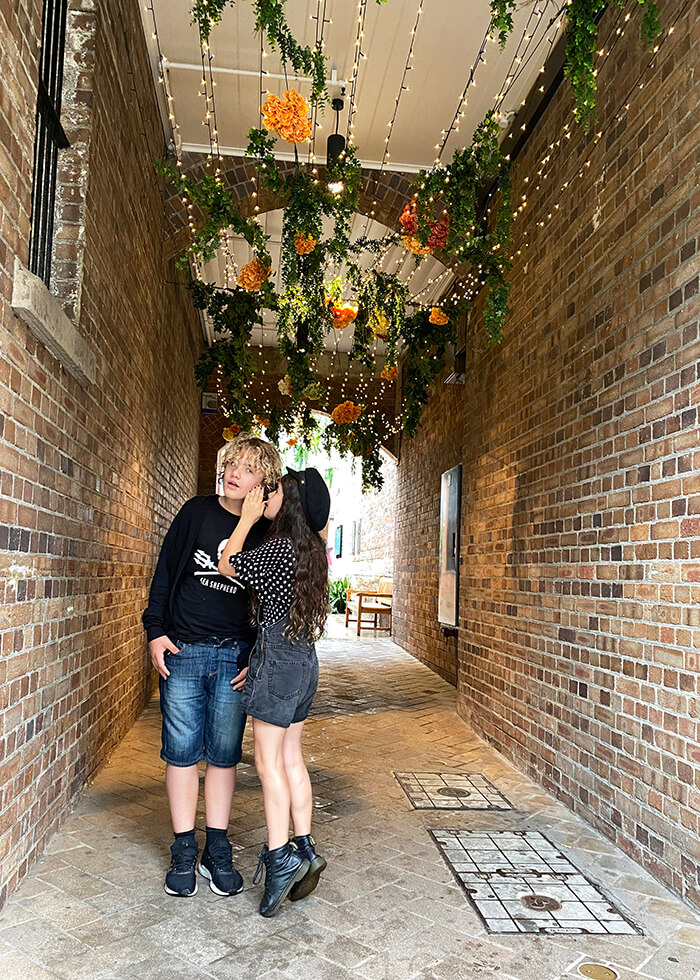 Upstairs is a huge roof top terrace which we discovered is more than big enough for cartwheels (my sister can’t help herself) and has to have one of the best views in Sydney. 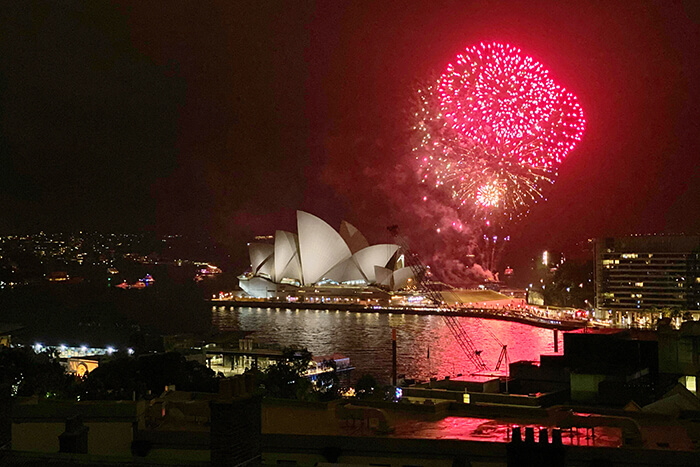 We spent ages up there each day just chilling and soaking up the vibe. We even got treated to a little fireworks display. The hostel also hosts barbecues and other fun activities for guests here, which is pretty cool. 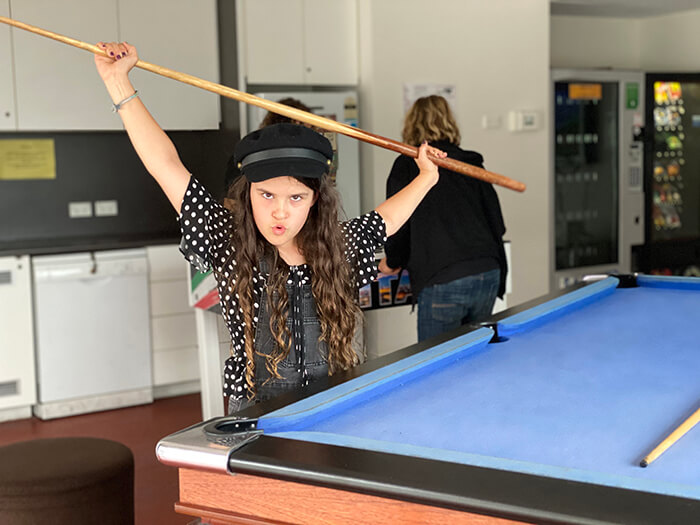 We also lost a whole lot of time playing pool and foosball in the games and television room, which is right alongside the terrace. I won every time, of course. 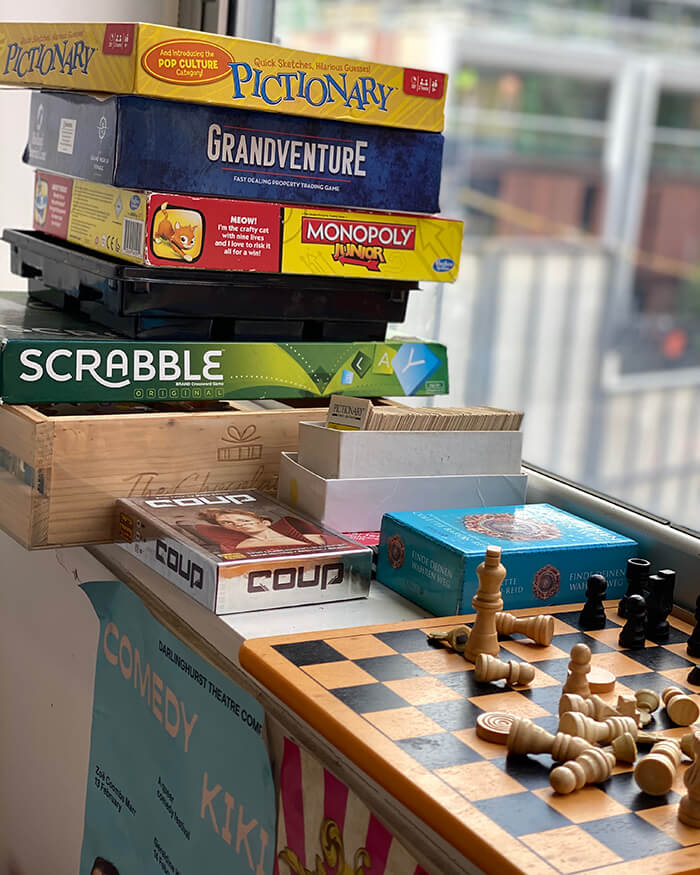 They also have heaps of board games and a stack of books for guests to borrow.

Alongside the lounge is an outdoor patio with swing chairs and lounges where my sister liked hanging out in the sun. 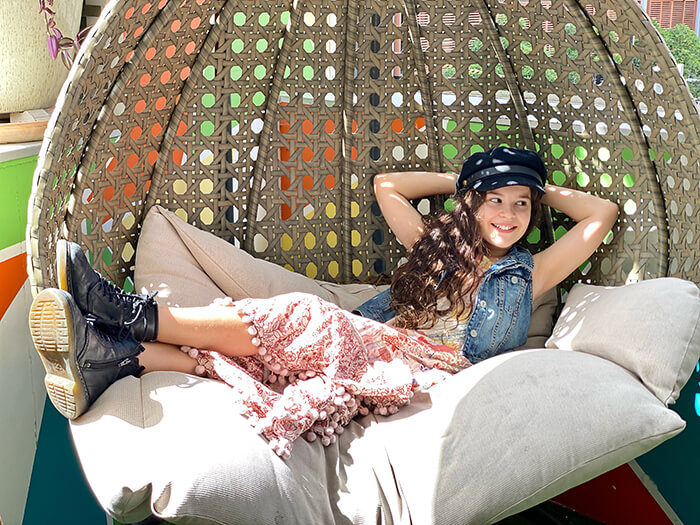 There’s also a massive, well -stocked communal kitchen where, after sending dad five minutes up the road to Coles to fetch ingredients, I whipped up a pretty tasty lunch of pad kra pao gai (Thai mince chicken with holy basil) for the rest of my fam, while they kicked back in the lounge with a good book.

Oh, and I think it’s really important to mention that Sydney Harbour YHA is not only working with heritage conservation and the local community, they are sustainability superheroes, dedicated to energy efficiency, water conservation and recycling.

Another great thing about the Sydney Harbour YHA is that if you don’t want to cook, there are so many great restaurants on your doorstep. Conveniently, it’s right next door to the Australian Hotel, where we went for pizza and live music. 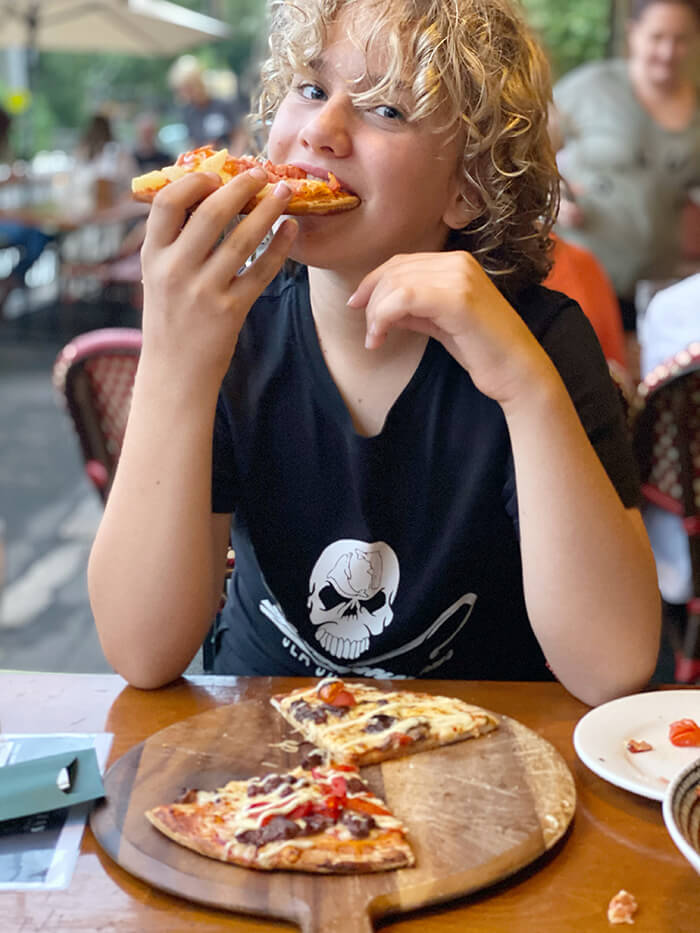 The pizzas are pretty interesting too. I ordered the Coat of Arms, which was topped with kangaroo and emu. Where else in the world could you eat a country’s coat of arms on a pizza? 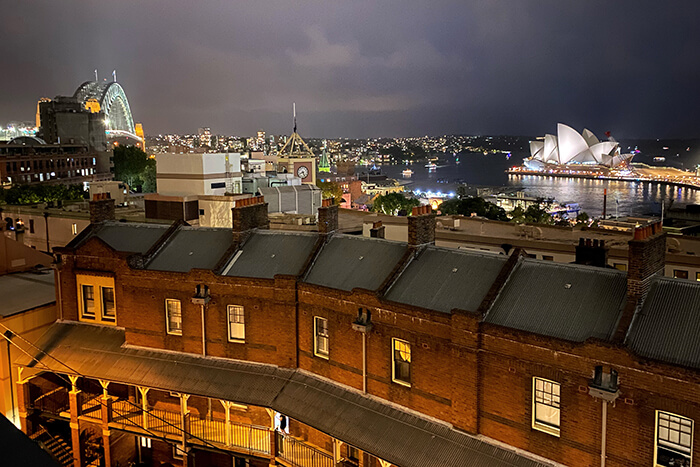 And there’s always the option of takeaway so we can enjoy it on the rooftop watching another epic sunset over Sydney Harbour, the Opera House and Harbour Bridge. If this is hostel life, I could get very used to it.

Disclosure: The BoyEatsWorld family were guests of YHA Australia, but all pool sharking, roof lounging and opinions are our own.