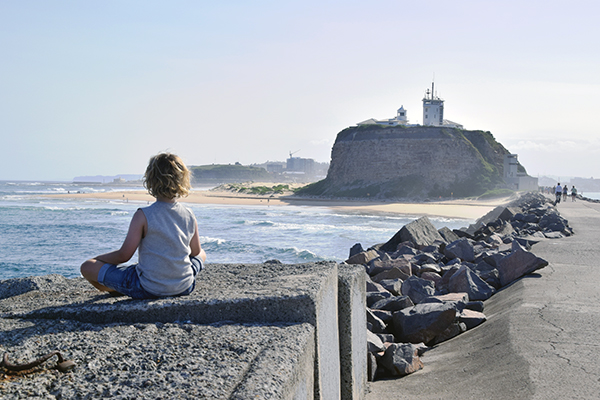 “Mum, this place kinda feels like home,” declares a smiling Raffles within minutes of checking into the harbour front Crowne Plaza Newcastle. And while our actual home may not boast a marble-clad foyer, an army of friendly-staff or stunning views over Newcastle’s working harbour, he’s right, this place does radiate a special “at home” kind of vibe.

Which immediately raises alarm bells with me. I mean, given the kids’ penchant for parading round stark naked while trashing our own home, this could get ugly! But lucky for the other guests, Raffles and Sugarpuff remain suitably attired and instead of nuding up, don their helmets and grab their scooters to ride to Nobbys Lighthouse. 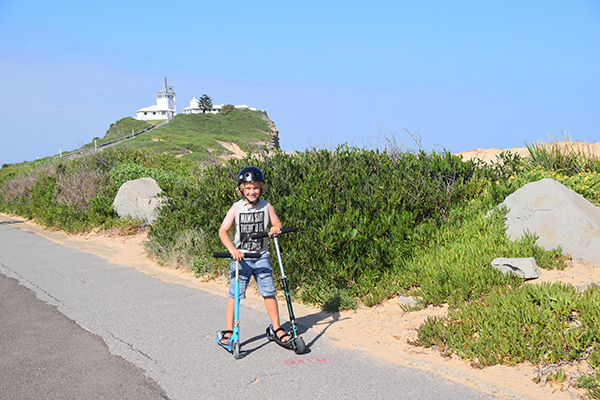 We scoot along the boardwalk to the famous old Lighthouse. Now one of Newcastle’s premier attractions, the dramatic lighthouse is perched on a pretty headland that was spotted by Captain James Cook from the ship Endeavour in 1770 and first flashed its beacon in1858. We scooter past it and to the end of the breakwall, Raffles taking a break from clambering over rocks only to soak up the stunning views over the Pacific Ocean and Nobbys Beach. 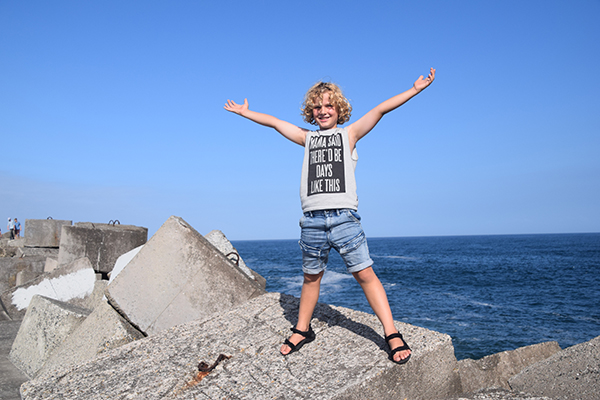 On the return scoot along Wharf Road, we’re surprised to see Aussie Icon, Harry’s Café D’Wheels and agree it would be positively UnAustralian for us not to stop for a couple of “Tigers”, chunky beef pies packed with mushy peas, mash and gravy. The meal provides enough fuel for the kids to demand further exploration so we head to Newcastle Museum, which is literally right next door to the Crowne Plaza Newcastle, with only an oddly large red metal camel separating the museum from the hotel. 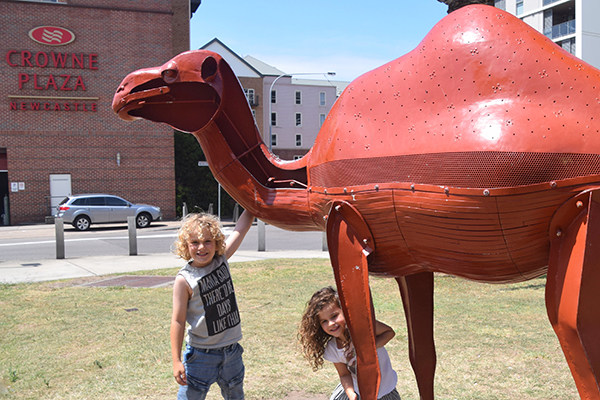 I’m astounded by the modern and awesomely interactive museum which has plenty to see, inside and out… 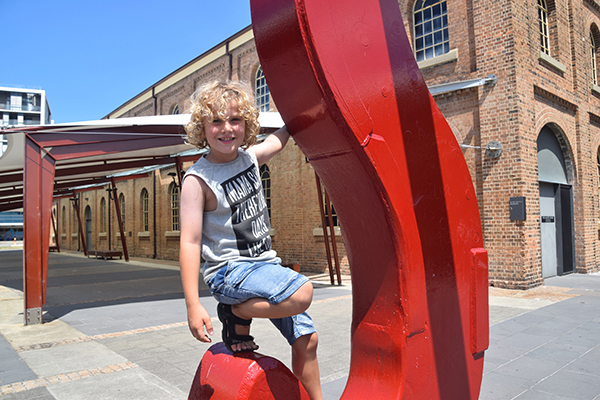 Not only by the quality of the collections, which bring significant moments of the past, present and future to life, but by its amazing hands-on science centre and indoor play space, Supernova! 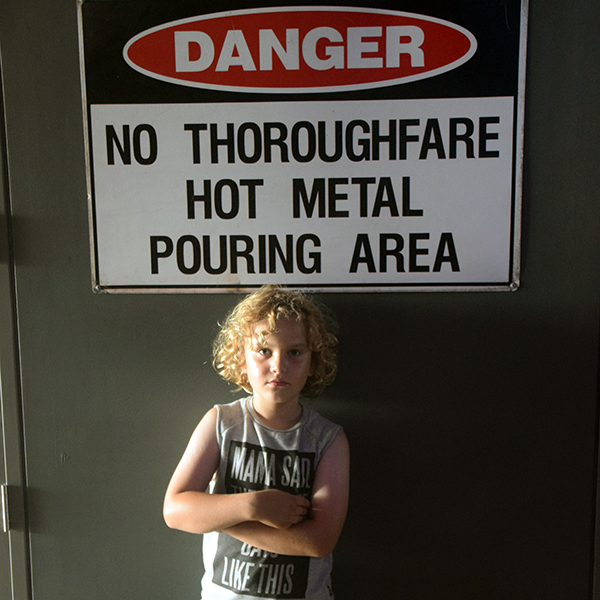 The kids walk under the massive illuminated globe, lift a car with nothing but their own strength and might, make their own tornadoes and play in a magnetic field. 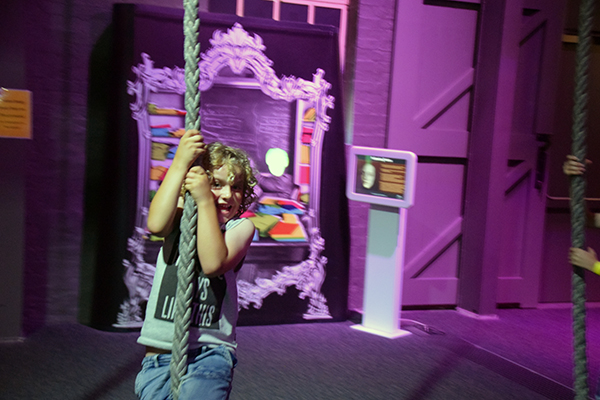 The only thing that can lure them away from the incredible museum is the promise of a swim in the fabulous harbour side pool at Crowne Plaza with their bright new beach balls, left by the thoughtful hotel staff for them to play with. 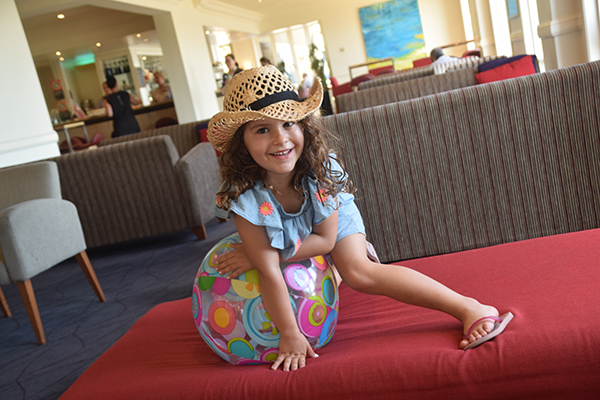 Our swim is followed by a decadent seafood dinner in the hotel’s awesome Seasalt Restaurant. Entrees of garlic and chilli prawns and a sublime salmon ceviche with pomegranate and finger lime were followed by a delectable Fisherman’s Basket of grilled king prawns, Balmain bug, squid and salmon. 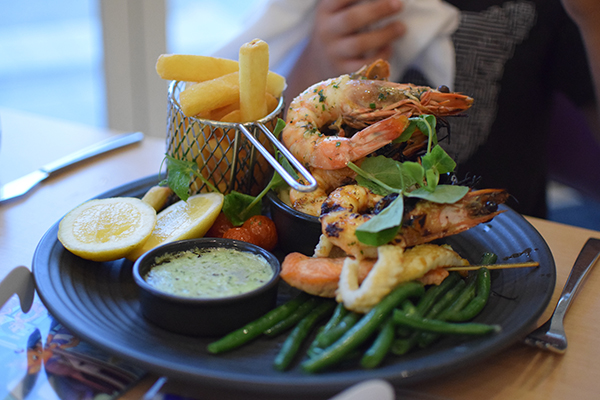 But when it comes time for a dessert, the lure of the traditional hotel bed leap,argy bargy over who sleeps where, and a movie in our room proves too much to resist so we order ice cream sundaes to go. 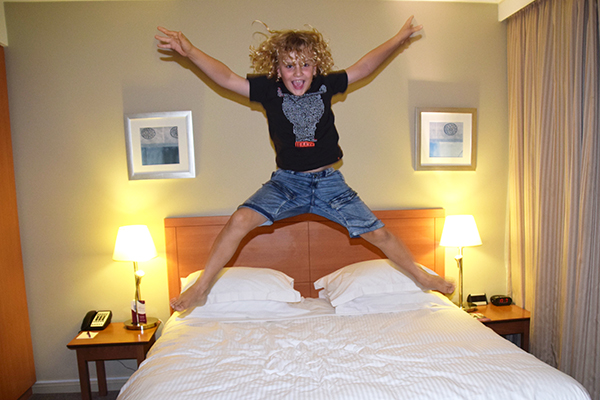 Our interconnected rooms offer us not one but two comfortable lounge rooms, but we devour our ice cream in slothful style watching television from the main bed. Because we can.

And then, after trashing our room like the rock stars they are, the kids head off to sleep in their own unscathed room. 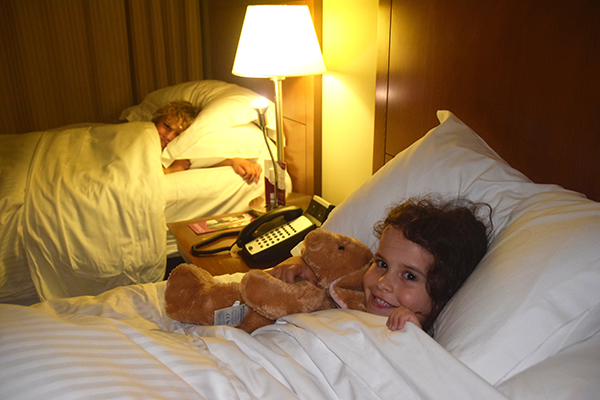 The following morning I take advantage of free entry into the massive fitness-centre next-door to work off the previous evening’s indulgences. It’s early when I arrive back in our room to the kids but the kids are awake and squealing over the impressive sight of a huge tanker floating right by our window.

We hit the breakfast buffet and rather than holding back, I waste my morning’s gym efforts and taking after my pelican like son, elect to eat all the things, including a fab, cooked-to-order eggs Benedict. I assuage any guilt by working it off with a bicycle ride, after taking a look at some of the extraordinary street art located around the hotel. 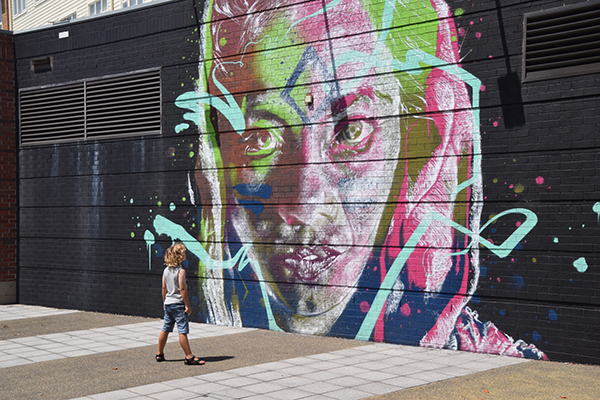 Newcastle is one of the first cities in NSW to offer a bike hiring system and, happily for us, there’s an automated stand located right outside the Crowne Plaza, where we hire bikes for a couple of hours. 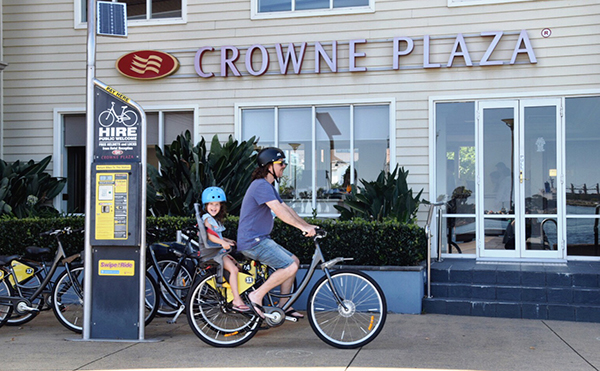 The lovely hotel staff are happy to assist us with a loaner from their sneaky stash of helmets and in a few minutes we’re off, whizzing along the waterfront all the way to Flagstaff Hill and Fort Scratchley, a former coastal defence installation that now serves as a museum. 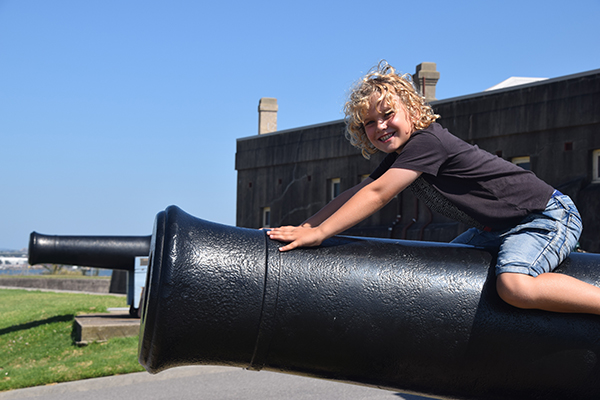 At the fort we soak up view of the city, beaches and our old friend Nobbys Lighthouse, before heading underground to tunnel through 200 years of history. 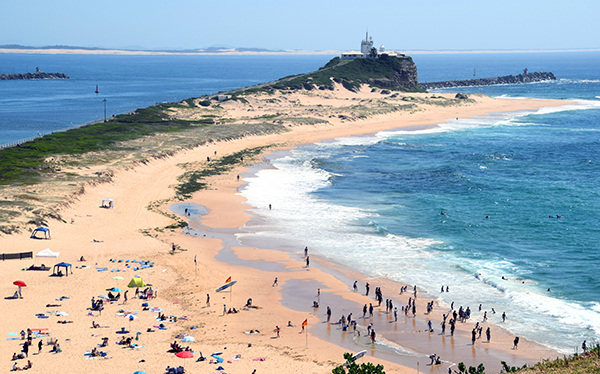 Our tour guide shares the history of Fort Scratchly, one of the few gun installations in eastern Australia that actually engaged in fire during World War 2, with tales of the brave men who fought to protect Newcastle Harbour. 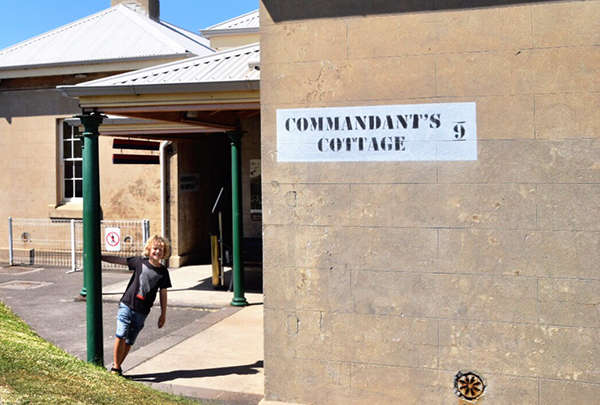 Visions of Newcastle’s past continue on a 450-metre long cliff top stroll along the Newcastle Memorial Walk linking Strzelecki Lookout to Bar Beach and built to commemorate the 100th anniversary of the ANZACs landing in Gallipoli.

A visit Newcastle without a swim at the irresistibly Instagrammable Newcastle Baths is totally against the rules! The picture perfect art deco complex of sea baths, lap pool and an enormous sand filled paddle pool has lifeguard supervision (in the massive main pool only) seven days a week and there is an old-style beach canteen serving up seaside treats. 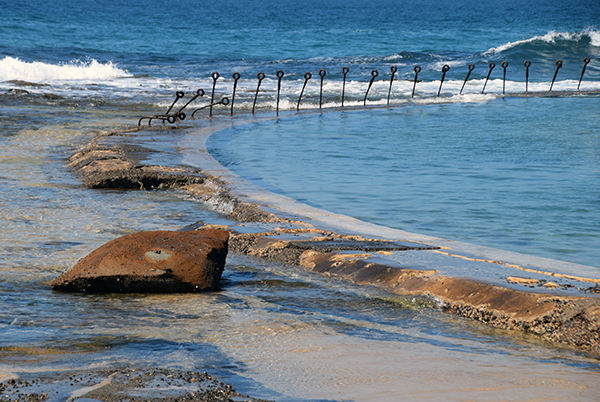 It’s a perfect spot for families, including this one and we happily while away the hours before the crowds grow and we head back “home” to the wonderful Crowne Plaza and more swimming in the hotel pool. 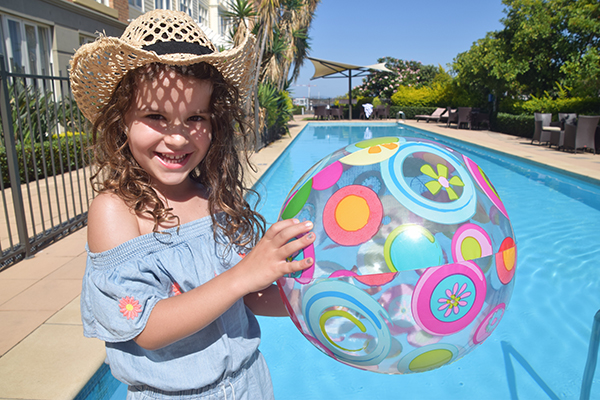 On our way out of town, after our short break, we pass a stunning artwork by renowned street artist, Adnate, and we have to stop. 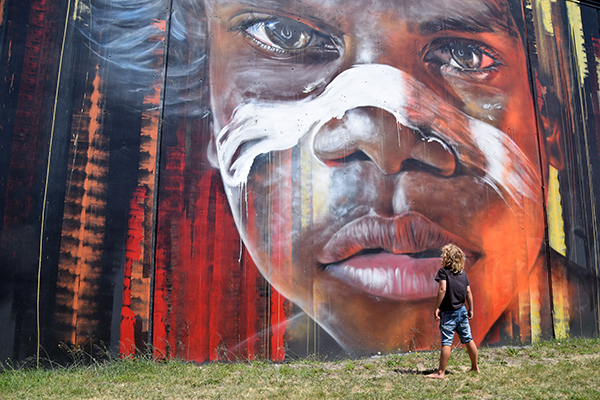 The work is breathtaking, just like Newcastle, a place it turns out that may just be one of Australia’s most family-friendly and charming cities. And we drive away having barely scratched its rather pretty surface.

But you know, this is fine by us because it provides us with a mighty excuse to tack on a few days when we head off on one of our regular trips to the Hunter Valley’s wineries,  Lake Macquarie and Maitland, o explore this great city further, and enjoy another stay with our fab new friends at the Crowne Plaza Newcastle.

Disclosure: The Eats World stayed as guests of the Crowne Plaza Newcastle for one night but all experiences and most meals were at our own cost and discretion. All opinions remain our own.