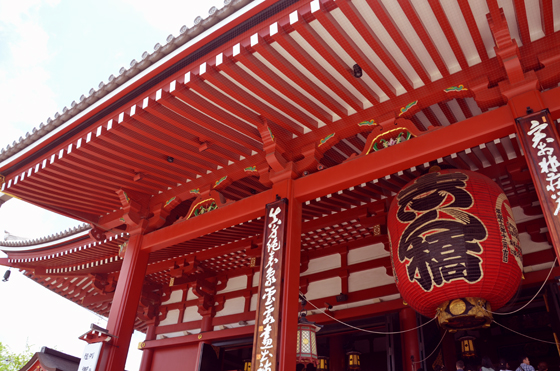 I’ve been in Shinjuku station for 60 minutes and I’ve been lost for 58 of them. It may be due to the fact that I’m enormously stupid or it may be because the station, Asia’s largest, is freakin’ enormous!

So big that more 3,500,000 people spill from its 200 plus seemingly identical exits every day. 3,500,001 if I ever find my way out, which I’m beginning to doubt. In fact, I think it may swallow me alive. Or perhaps I might swallow it? You see, everywhere I turn, even underground, is food.

I’ve only got a day and a bit in Tokyo, sans family, and I’m packing a must-see list the size of a novel, but as I walk past a particularly fragrant Ramen shop I can’t help but dive in and fall into the welcoming arms of a bowl of noodle soup. And, as I take the first amazing mouthful, I make a snap decision and screw up the list. 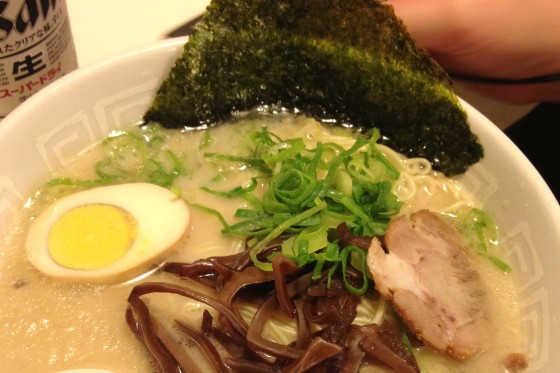 Forget shopping centres, skyscrapers and shrines, I’m going on a self-guided Tokyo food tour.I have a little less than 24 hours left and like an antipodean Godzilla, I’m gonna to eat my way through Tokyo. I throw down the gauntlet and set myself a challenge. 24 dishes in as many hours (give or take). I mean, I’ve already polished off a bowl of unagi don…. 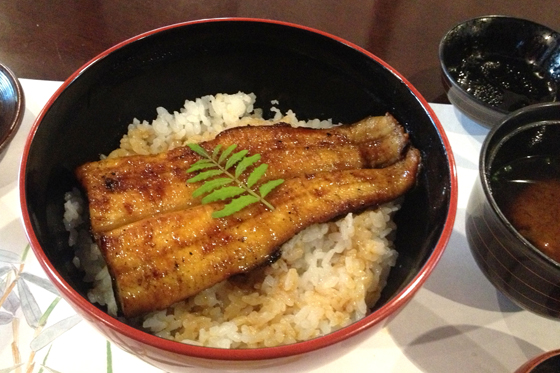 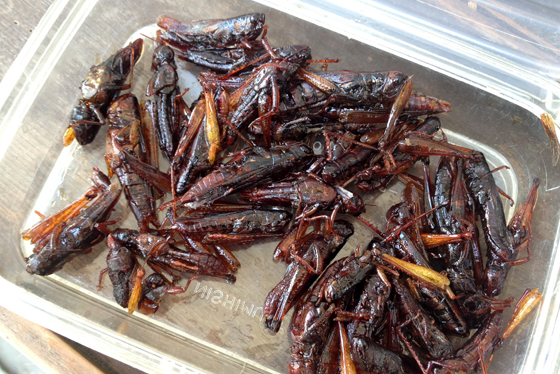 So factoring in the need for sleep and the Ramen I’m scoffing as I come up with my wild plan, I’ll only need to eat something every 45.7 minutes between now and my deadline of 7pm tomorrow!

Well, except that I’m already feeling a little full post ramen. Still, I figure I can manage a plate of the plump gyoza that I spot at around the same time I find the exit I’m looking for. 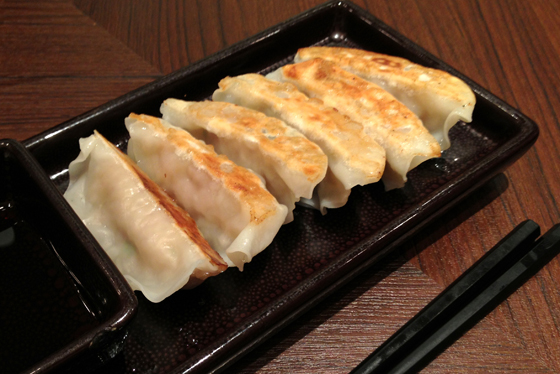 Once I escape the station I discover that the streets of Shinjuku are also packed with food vendors. I stop for a plate of edamame here… 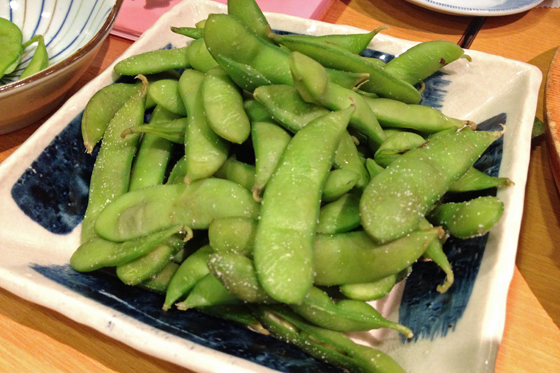 And for takoyaki there. I mean it would be criminal NOT to try at least one… or six of the unctuous octopus balls. 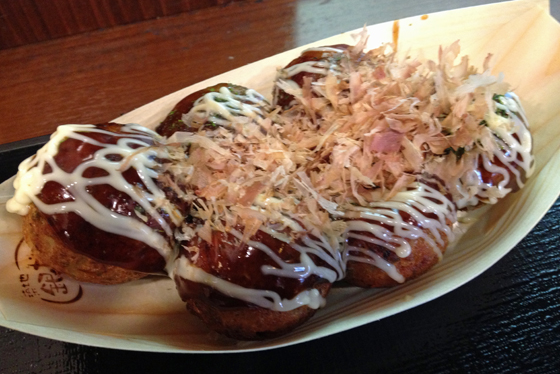 I pop into one of the groovy wee Izakaya bars in Memory Lane to suck back a refreshing plum wine on ice (which, incidentally, I am now addicted to) and neck a pork belly yakitori. 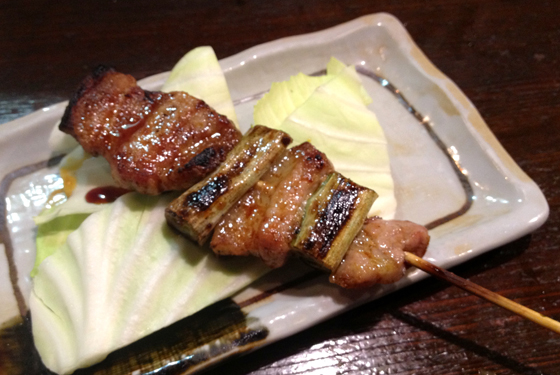 Oh, and a a plate of tuna sashimi. 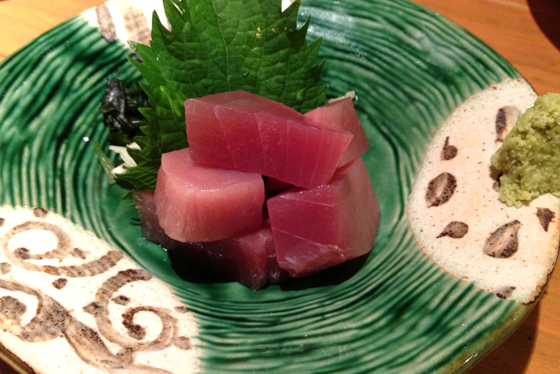 “You’ll do yourself an injury” cries my husband when I Skype Australia that night and explain my plan, “no-one can eat that much”. But I’m already seven dishes in and Raffles is behind me all the way. “Go mama, you can do it!” he shouts as I knock back a bean cake and bid my good-byes. 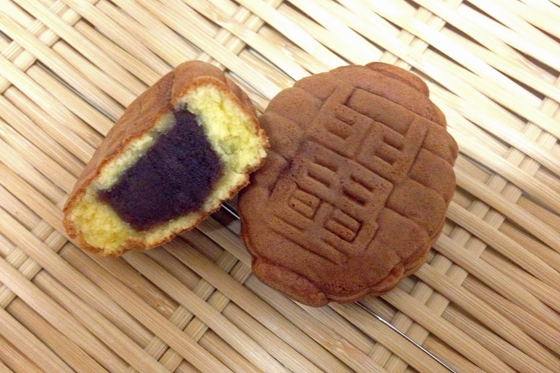 The following morning I make an early with a 5am pit-stop at Tsukiji Fish Market and after an hour of queuing find myself faced with the most incredible fresh ark shell sushi, whatever the hell ark shell is. All I know is that the crunchy sea thingy is sublime. 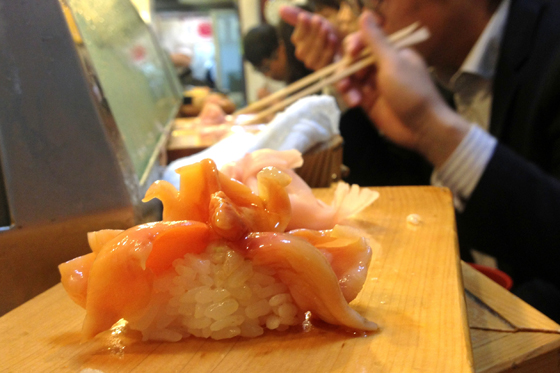 I catch a train (having made my peace with the subway system) from Tsukiji to Asukasa, stopping only for a plate of delicious cold poached eggs in something something sauce that I pass by on my way. 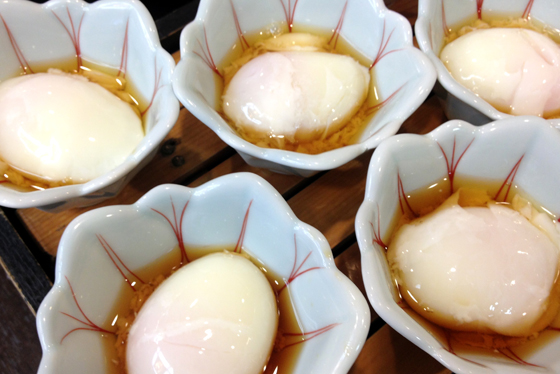 It’s barely 8am when I arrive at Asukasa so I figure tea and a little mochi is in order. 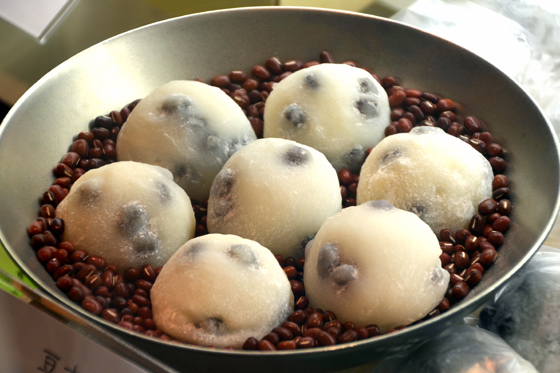 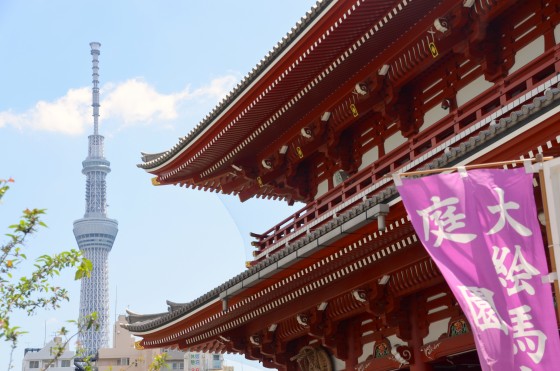 It’s quite beautiful but once again the smell of something smoky and sizzling draws my attention. This time it is a glutinous rice and pork on a stick. And it’s soon added to the contents of my belly. 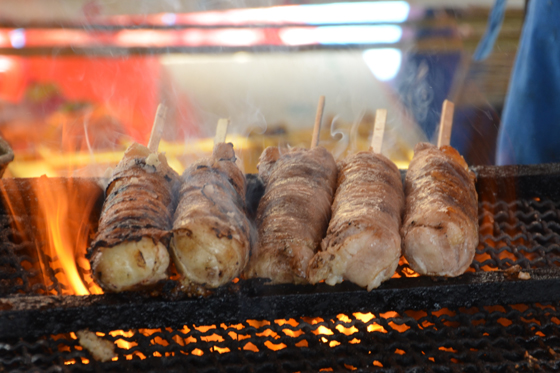 As is a cup of chicken kara’age. 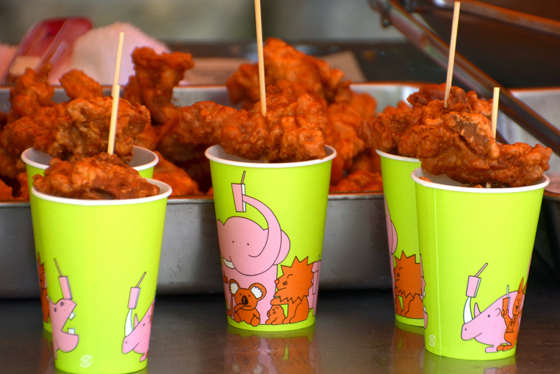 Then it’s time for another train and a palate cleansing plate of cucumber dressed in sesame with a side of counter cultural mayhem in Harajuku. 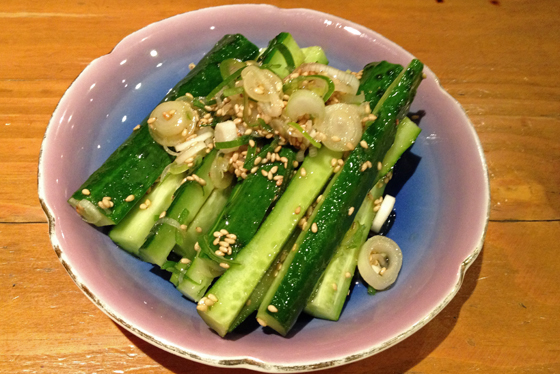 And a little Pork Katsu. 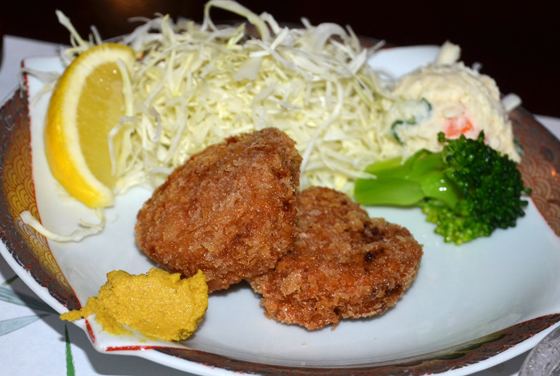 I hop a taxi to Ginza to find myself in an enormous department store where there are two massive floors devoted to the worship of food. I want to live here. In the actual department store.

I tackle some slippery prawn thingys. 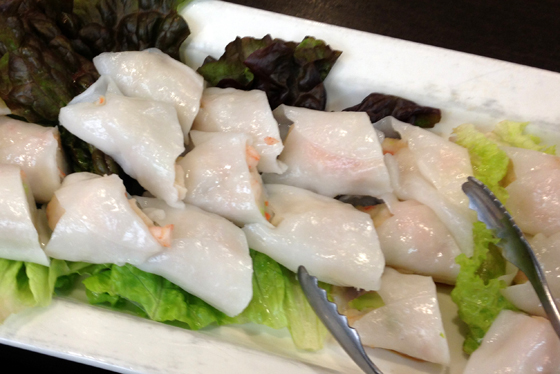 And a fluffy sponge filled with sweet bean curd. 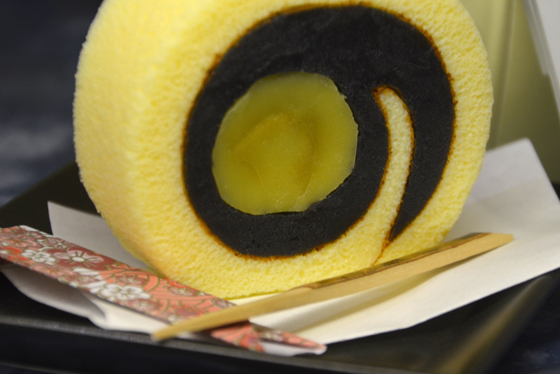 But I’m starting to feel the need for respite from both crowds and the delicious temptation of two levels of Japanese delicacies. So I walk (read: waddle) along the tree-lined streets past Hermes, Dior and Gucci to neighbouring Marunouchi, a suburb that rocks a refined Double Bay meets Park Avenue vibe until I find sanctuary in the tranquil lobby of the Peninsula Tokyo. 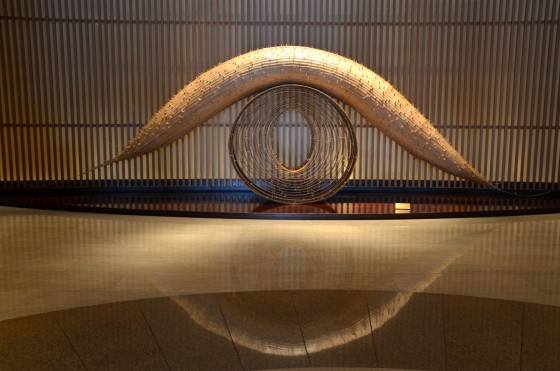 I’ve just started sipping on a cleansing green tea and am loosening my belt when suddenly it dawns on me where I am… only the home of that most iconic of Asian culinary experiences, afternoon tea at the Peninsula. Arse! 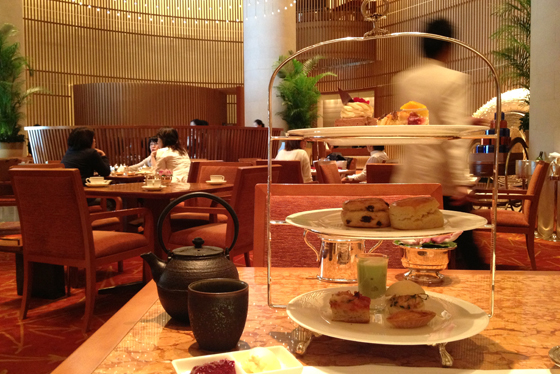 What was I thinking? I’m already full. This is heaven and hell, the platter of decadent loveliness is outstanding but there is so much of it, I hurt. And I still have five meals to go. Nooo…

There’s wi-fi in the lobby so I call home and (with a mouthful of scone) tell my disappointed son that I am defeated… I can’t go on. But Raffles, my guru of gluttony, gives me a motivational pep talk and tells me to get off my expanding butt and kick my second stomach into gear… sigh.

Bloated, I’m beyond walking or public transport so hail a million dollar taxi. As we drive away I spot a Ladurée store bursting with pretty macarons and the sight of it actually makes me throw up in my mouth a little. I’m that full. I avert both my eyes and my belly.

An hour later, I’m in the most delightful izakaya in the hipster haven of Shimokitazawa, Tokyo’s coolest neighbourhood and quite possibly my favourite spot in all of Tokyo. 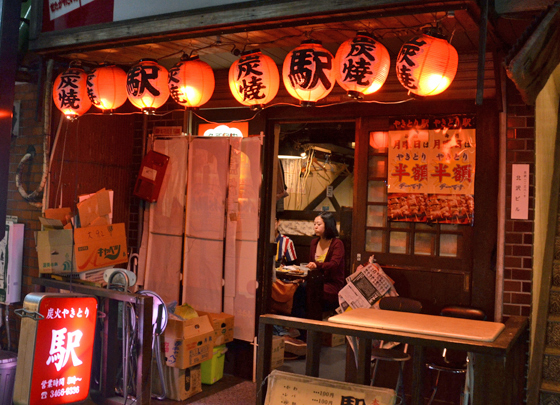 And of course, I’m eating again. This time it’s a plate of spicy chicken yakitori washed down with some apple wine. 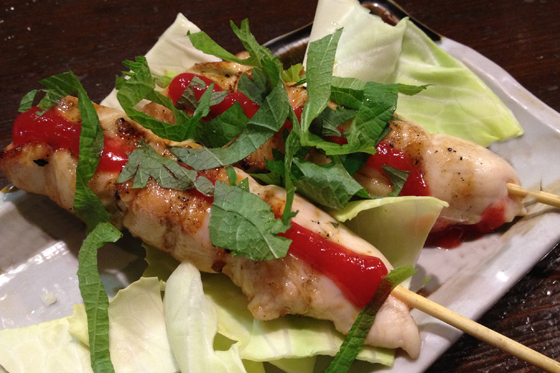 As I’m about to leave a random plate of agedashi tofu appears, one of Raffles’ faves. I take it as a sign and scoff that too. 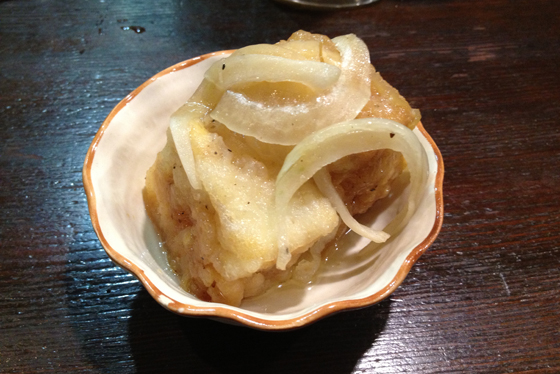 Back in Shinjuku I squeeze in a little plate mixed plate of sashimi before I meet some fellow writers at yet another izakaya. 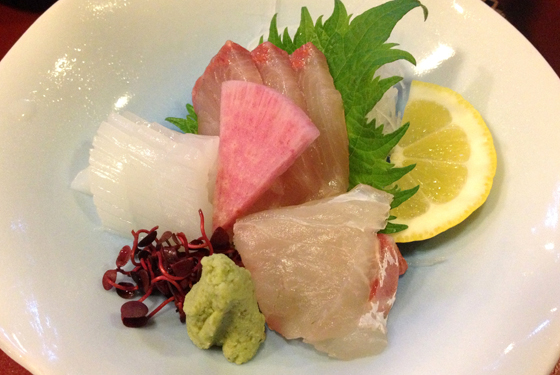 Here, much to the disgust of my companions, I also find myself shoving a chicken’s reproductive system down my neck. 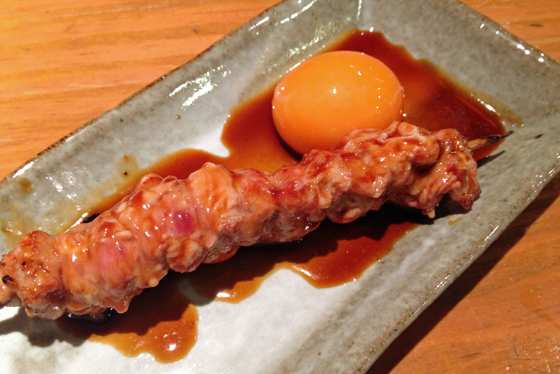 It’s actually good and had I not been close to death by overeating, I’d have thoroughly enjoyed it.

At 6pm I’m 23 meals down. And conveniently in a restaurant. Of sorts. 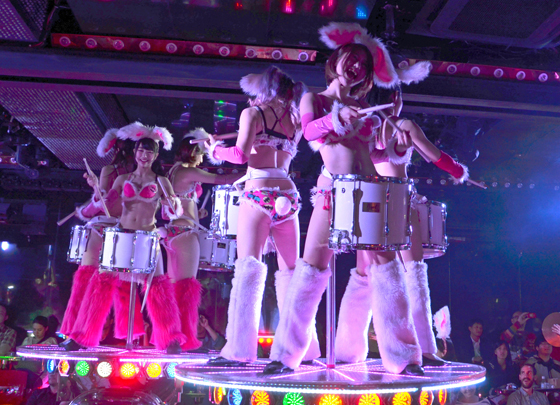 Tokyo loves a themed restaurant but the title for Tokyo’s most out there has to go to Robot Restaurant. I’ve never tried LSD but I’m fairly certain the effect would be something like a visit here. Picture giant fembots, bikini-clad warrior princesses hang gliding from fire breathing pterodactyls and a panda bear riding a bull through a line up of 10 foot robots. 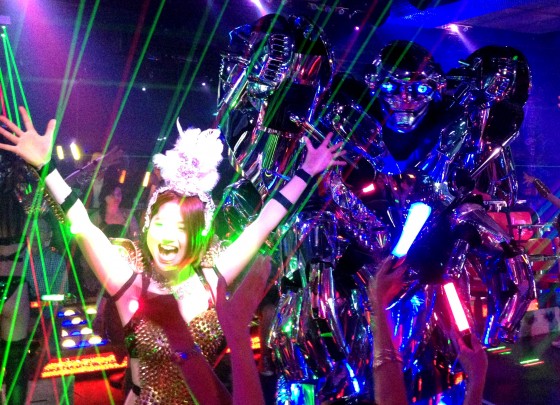 In fact, by the time the giant mechanised shark – ridden by a mermaid – eats an eight-foot tall robot warrior, I’m barely raising an eyebrow.

But with less than an hour on the clock, I can’t bring myself to eat one of the bento boxes on offer. I. Just. Cannot.

At 6.55 one of my friends reaches into her bag and pulls out a packet of senbei, a type of Japanese rice cracker, and with a look of excitement, throws them to me. She points out that I can still get this experiment in conspicuous culinary consumption across the line.

They do now. I shove a “wafer-thin” cracker into my mouth expecting that at any moment, just like Monty Python’s chunderous Mr Creosote, I will actually explode.

But as the clock ticks over to 7pm, I’m still intact. I’ve done it. 24 dishes in 24 hours in Tokyo. And to celebrate, I’m going to slip into a food coma. G’night.