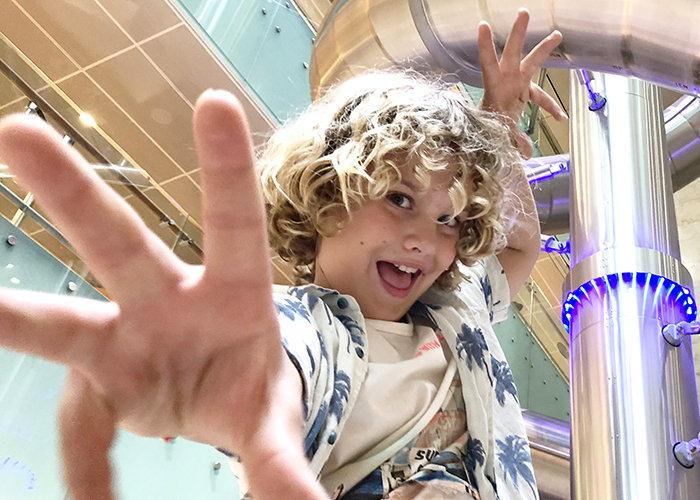 I love travel more than just about anything, even eating. Ok, so maybe not more than, but at least equal to. But, luckily food and travel go hand in hand. Unfortunately, so do travel and airports. I mean, I love flying, unlike my scaredy-cat mum, but there’s literally nothing more lame than sitting around for hours and hours in an airport waiting for a flight.

Seriously, just about the only entertainment I can ever find at an airport is winding up mum by asking her when our flight is leaving every 15 seconds… and annoying my little sister.

But then there’s Changi, Singapore’s epic international airport. Having visited or transited Singapore at least a bazillion times, it’s my favourite airport on earth. In fact, it’s so awesome and there’s so much for kids to do to kill an hour or 12 I’d happily have a holiday in the terminal.

1. You can fly before you take off 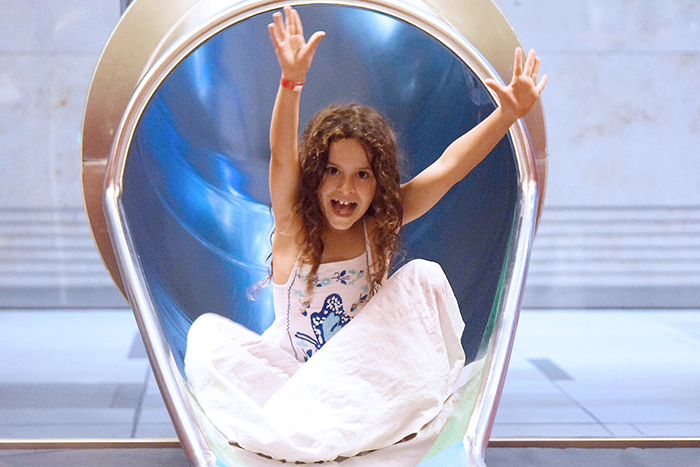 The best thing about Changi is you don’t even need to check-in before you can start flying. In Changi’s Terminal 3 there’s a twisty, turny insane 12-metre high slide in the public area.  You can zoom down the slide at super speeds of up to six metres per second and there’s a shorter, slower route for little kids, like my sister. Me? I’m going all the way.

2. You can eat Kitty food 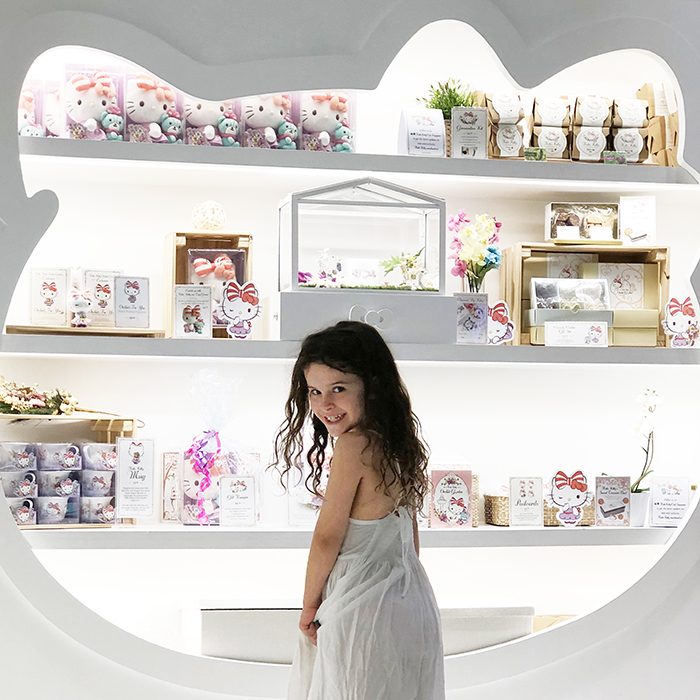 OK, so I’m not really a huge fan of Hello Kitty but there’s a Hello Kitty Orchid Garden Café in the public area of terminal 3. I mean, seriously dude, do I have to? Turns out yes, when you have a bossy little sister in tow. But while she goes into conniptions over all the flowers and frills and Hello Kitty fluff, there’s actually a fantastic menu of themed breakfast and brunch that I am quite happy to scoff.

3. You can explore an enchanted Techno garden

The Enchanted Garden in Terminal 2 has four giant glass bouquet sculptures decorated with mosaics and filled with flowers and ferns. Plus there are fibre-optic lights and LEDs that sparkle to life with light and sound. Cool!

4. You can flutter by 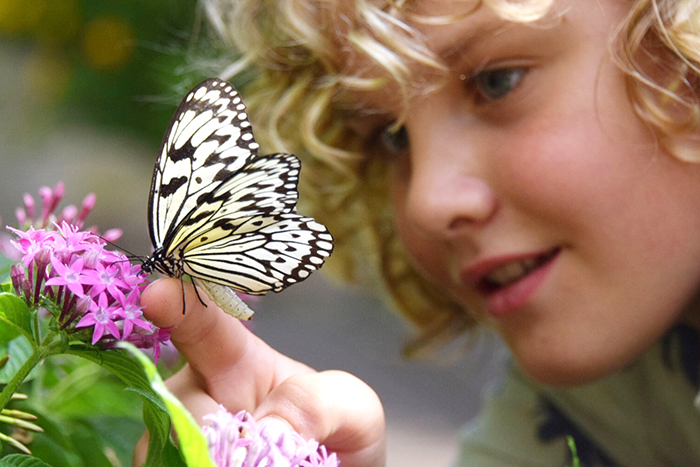 I love Changi’s butterfly garden in Terminal 3. The world’s first butterfly garden in an airport, there’s a tropical garden with waterfalls and ponds and more than 1000 brightly coloured butterflies. But as well as being able see loads of neon winged fluttering insects, the garden is educational, and we were able to learn all about their life cycle at the garden’s educational stations. 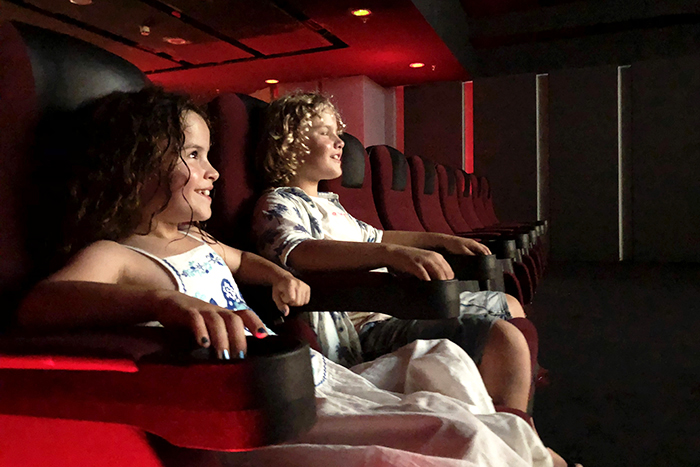 Ok, I have to admit I love a screen, but instead of having to flip out the iPad to kill time while waiting for a flight, they have actual, air-conditioned movie theatres in Terminals 2 & 3, screening free movies all day and night. We got to watch Jumanji: Welcome to the Jungle while we waited for our last flight. Can’t complain about that.

6. You can get decked

The Entertainment Deck in Terminal 2 has movies, retro arcade machines, PlayStations and computers, and an awesome Xbox Kinect gaming experience that allows you to play a variety of sports on screen. You know where to find me.

7. And it was all yellow 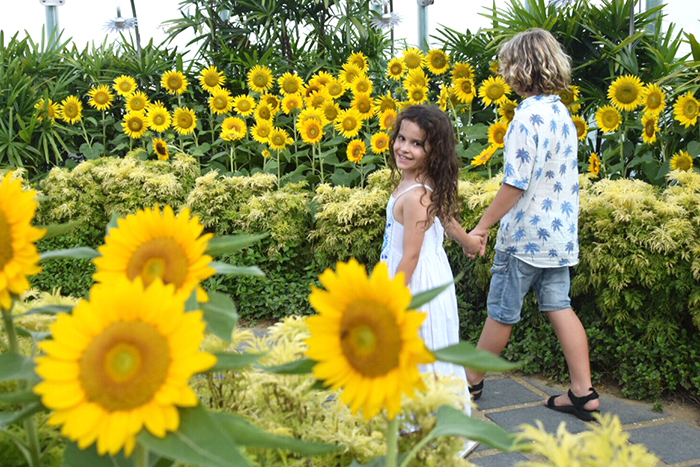 This place in Terminal 2 has nothing to with a Coldplay song. Instead it’s an unexpected field of hundreds of bright yellow sunflowers on the roof of Terminal 2. It is the last thing I’d ever expect to find in an airport, but Changi is no ordinary airport.

8.You can get a little zen

There’s a Water Lily Garden in Terminal 1. It’s a really chilled place where you can relax alongside giant Amazonian Water Lilies and sacred lotus flowers. Namaste.

9. You can be quite crafty 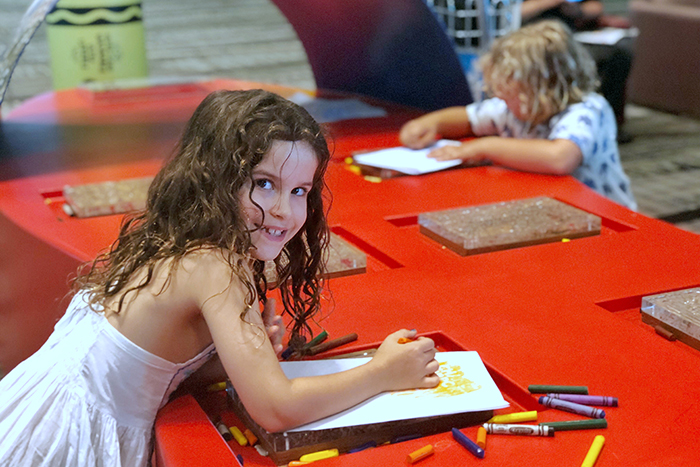 My sister loves craft, and she really liked the art rubbing stations located in each terminal at Changi. There were loads of supplied crayons to make art imprints of Singaporean icons like the Merlion, and she got to make a pretty cool picture to take home.

At the Aerotel Hotel in Terninal 1, you can enjoy a swim and a splash between flights in the rooftop pool. It’s free for guests of the hotel, but if you’re not staying you can access the pool for a fee.

11. You can get your Tarzan on amongst the vines 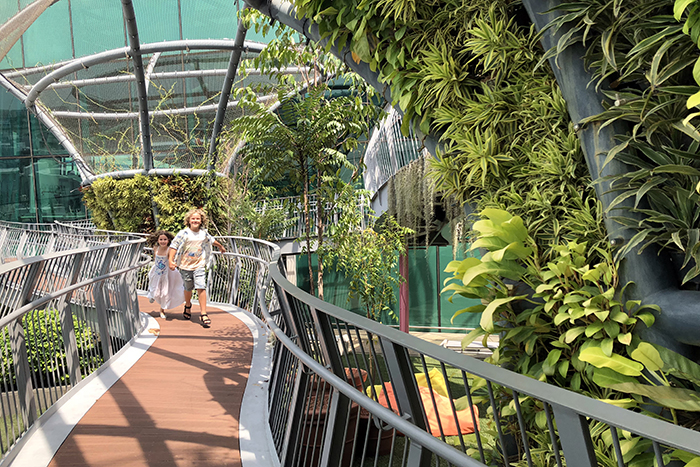 When you want to get your Tarzan on, Terminal 1’s Sculptural Tree Garden is the place to go. You can’t actually swing on the vines, but you can run around the raised walkways between vine covered sculptural trees.

In each of the terminals you’ll find awesome air-conditioned play areas to suit kids of all ages with loads of climbing frames, obstacles and slides. 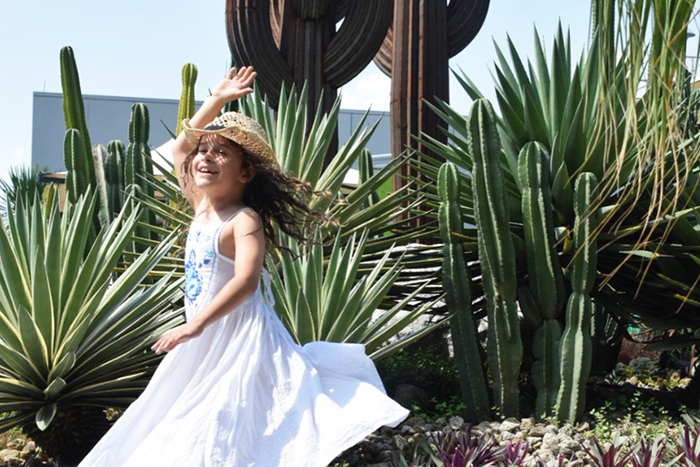 There are more than 100 species of cacti and arid plants from Africa and the Americas in the cool cactus garden in Terminal 1. It is a bit smoky though as it’s a designated smoking area. 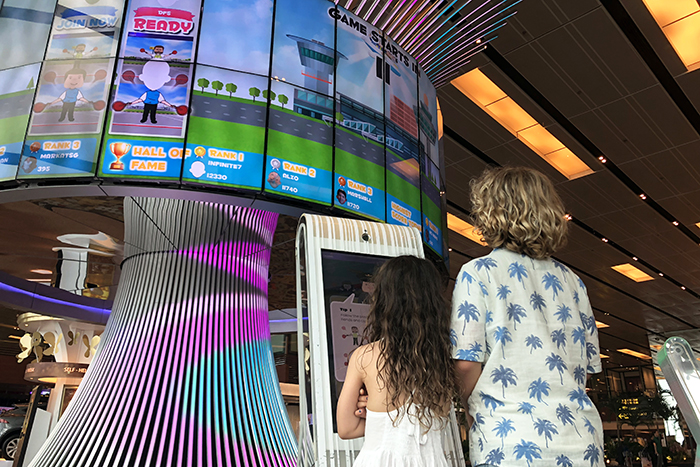 In Terminal 1, the Social Tree looks like a shrunken version of Gardens by The Bay. It’s a super cool interactive installation, meaning more screen time. The Social Tree lets you snap and store photo and video memories of Changi instantly. You can dress your image in costumes and share them to social media or send them off around the world on the massive 260-degree digital screens that sit on top of the Social Tree. You can also challenge other visitors to games using your avatars. We’ve even been able to retrieve our old images when we’ve come back to the airport on other trips.

15. You can fill up on street eats 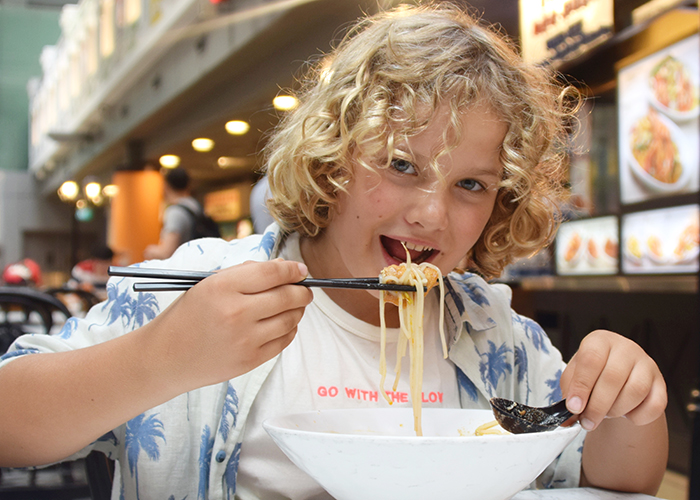 16. You can let your parents get pampered

Get your toes nibbled at the Fish Spa in Terminal 2’s Wellness Oasis. Let your mum and dad grab a massage at Be Relax in Terminal 3. Or send mum for a fancy schmancy pampering facial at SK-11 Pitera Lounge followed by a makeover at Dior. Not that my mama needs it, she’s already perfect! (Of course I want something!)

17.  You can experience an alien invasion (not really) 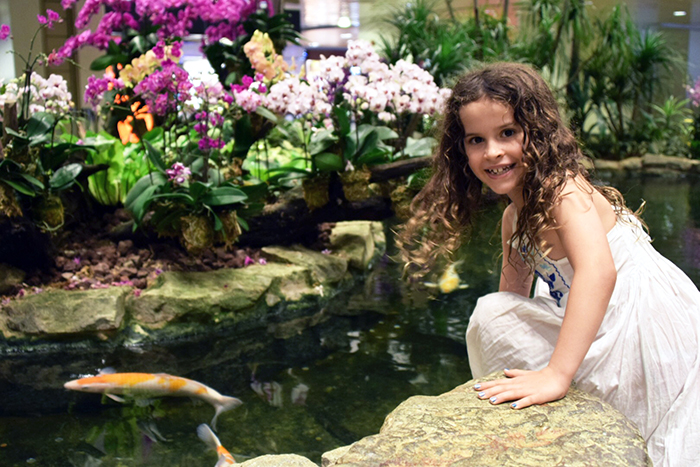 I love orchid flowers, because they look like weird bird aliens. They have 700 orchids and 30 species of orchids here so you can enjoy a close encounter with them at the Orchid Garden & Koi Pond in Terminal 2. They also have ponds full of orange, gold and white Koi fish blowing bubbles at passers-by.

18. You can search for treasure in a Jewel 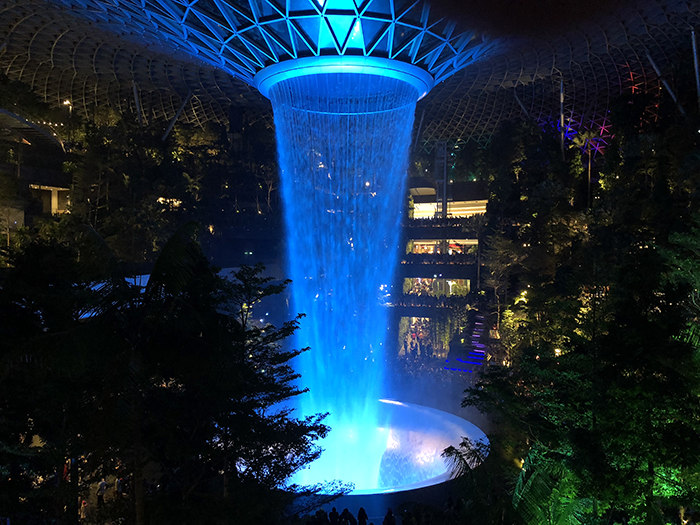 OMG! We managed to visit Jewel just days after it officially opened. It’s pretty epic. It’s basically a bazillion floors of food (including a branch of my fave Singapore chilli crab place, Jumbo) and shopping. My sister went nuts at the Pokemon Store and I was pretty impressed by the sheer scale but it is HSBC Rain Vortex, the world’s tallest indoor waterfall, which really blew my mind. It is thunderously loud and there’s a mesmerising light show using the waterfall as its screen. Just wow.

About the author: The perpetually hungry boy in BoyEatsWorld, Raff (10) is an experienced travel television presenter, published travel writer, and an award winning public speaker who has presented at International travel events.