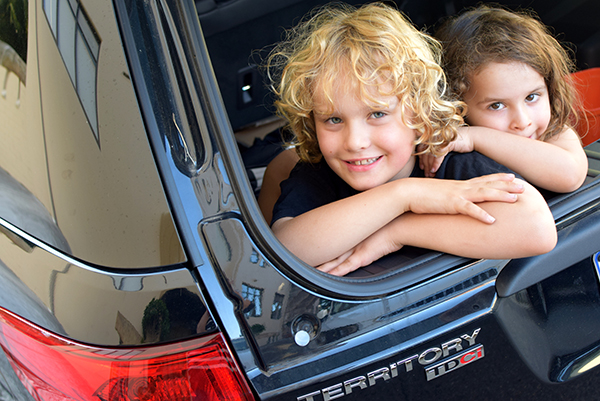 Before the advent of offspring I zipped around town in a two-door rally car and swore that I would never own anything bigger, like a wagon or SUV. I mean, they were the kind of things my parents drove. And I’d never be THAT old! Fast forward two kids and still I resisted the pull of practicality over panache. Until I met Ninja Terry-Lulu, the shiny black Ford Territory Titanium.

It was around this time last year that I was picking myself up of the ground after it was announced that BoyEatsWorld was the winner of the KidSpot Voices of 2014 Ford Sponsor’s Choice Award and a Ford Territory  Titanium to call our own for a year. And since Ninja Terry-Lulu (the ludicrous name the kids settled on after many arguments over whether the Territory was a he, a she or an Edo period assassin) joined the family, I’ve come to the realisation that I can no longer live without all the lovely extra space that comes with a gender fluid SUV… and that trying to squeeze in and out of an awkward two-door car is for teenagers. Or yoga instructors.

Not only turned have I turned into a complete SUV convert and devoted Ford fan, the Eats Worlds have spent so many weekends tearing about the countryside in him/her over the past year that we’ve also nailed the art of family road trips.

1. Play it safe – Visit an RTA authorised fitting station before you leave to check that your kids car restraints are correctly fitted – you’d be horrified at how many aren’t. It’s also important to have a safety check done on your car before you go – breaking down in the middle of nowhere with easily frustrated kids is not unlike stepping into the fifth circle of hell – only unlike Dante’s fifth Circle – the small, wrathful and sullen will punish you for your car’s sins!

2. Sun savvy – Dress the kids in loose clothing for a family road trip and keep them well hydrated. In warmer weather keep an eye out for hot belt buckles, which can cause nasty burns, and be sure to apply sunscreen to any exposed skin. Just because they’re inside a car doesn’t mean they wont get burnt… In fact, I’m rocking a two-tone right arm due to ignoring my own advice.

3. Driver reviver. Leaving the driving all to one person can become tiring and dangerous so make sure everyone take turns behind the wheel! The kids can be excused. 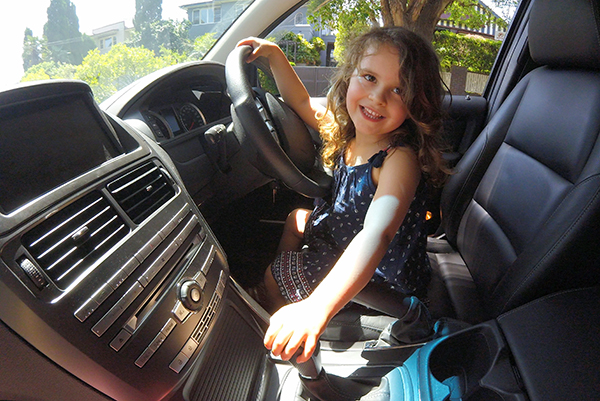 4. Slow motion – If you’re driving anywhere with kids, don’t plan on getting there fast. The Ice Age probably happened at greater speed than the average family road trip once you’ve factored in time for dawdling, general faffing, arguing with siblings over the latest rock/stick/useless object they’ve just found, car-seat-fiddling and the obligatory 3,798 toilet stops required as your kids will insist on going to the toilet in shifts. If you’re breastfeeding you’ll also have to factor in boob breaks, and older kids still need to stretch their legs from time to time to unleash all that angsty pent-up energy.

5. In the can – Speaking of toilets. If you’re going to add moving vehicles, strange bathrooms and dodgy public amenities to a toilet training toddler’s potty regime, it’s likely the shit will hit the proverbial fan… or at the very least the upholstery. Take a break form training and pack the pull-ups if you’re worried. Or you can get the scoop on how to avoid close encounters of the turd kind here.

6. Cunning plans – Pre-plan your stops by picking out parks, playgrounds and picnic stops on your route using an online mapping service. Pack a soccer ball or a Frisbee to make these roadside stops a little more fun. And remember that the aim is to have a good time not a fast one.

7. Way to go. Thanks to Ninja Terry-Lulu’s “talking map computer” I can no longer live without built-in GPS, especially given I can’t read a map and Mr Eats World can get lost driving around the block (don’t tell him I told you). But even with GPS, it’s a good idea to bring a printed set of directions… just in case.

8. The road less travelled – Take the scenic route whenever possible. Stopping at quirky local towns for meals rather than stopping for greasy highway fast food is not only healthier, but you’ll discover the most amazing places along the way. 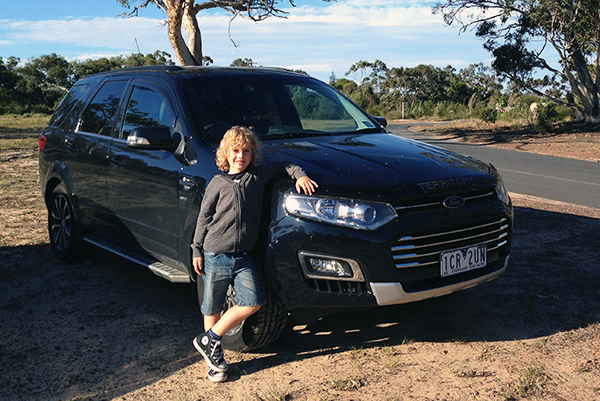 9. Kitted up – Long or short, for revery family road trip you need to pack an emergency car kit with eleventy million wipes, sunscreen, an up-to-date first aid kit (the lotions and potions tend not to work as well if they expired in 1972), a roll or two of toilet paper for emergencies, and a clean-up kit with paper towels and plastic bags for those times that it’s too late.

10. Bite me – An Esky packed with healthy treats is a must for any family road trip. This will prevent your children from turning feral and starting to gnaw on each other. Toss in a couple of frozen water bottles to keep everything chilled. As it melts it also provides cool refreshing water for drinking… and for tossing on the kids to bust up their latest argument.

11. Easy queasy – Motion sickness is more common in younger children and it’s not unusual for them to mistake a perfectly mundane hatchback for a porcelain bus. Take preventative steps if your kid suffers from the barfing bug – you can find our top 7 car sickness prevention tips here.

12. Wardrobe on wheels – Pack a spare set of clothes for each child as well as hats and warm layers if you’re heading somewhere chilly. There’s nothing worse than digging through the boot while juggling a puke-soaked kid, so keep the spare clothes easily accessible. It’s also a good idea to pack the boot in layers with the stuff you might need during the trip on top and the stuff you won’t on the bottom. This will help you to avoid introducing your kids to a bunch of special new words most frequently associated with sailors.

13. That’s Entertainment. The best way to stop the “are we there yets?” is to seal your children’s mouths shut with duct tape. As this is illegal, the other option is to pack plenty of entertainment, games and books on CD. We always swore we’d never give in to the temptation of tossing the kids an iPad or portable DVD player on a family road trip but it turns out that they’re like a gift from the gods for fidgety kids – just be sure the batteries are fully charged or you’ll end up with a mobile riot on your hands. We love that the Ninja Terry-Lulu has a DVD built in so our zombies kids are never left sans entertainment.

14. Music soothes the savage kid – We always bring an IPod loaded with everyone’s favourite tunes. And by everyone’s I mean mine. Luckily for us, if the kid’s choice of music sucks, Ninja Terry-Lulu comes with wireless headphones! Though they don’t block out live performances… 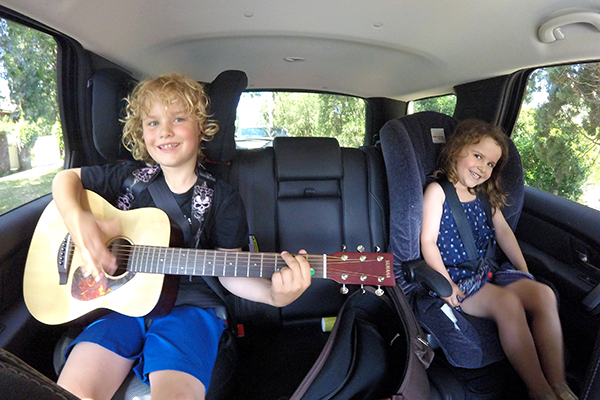 16.Game on? – If we’d had to play I-spy again, I may have been tempted to poke someone’s eye out. Instead we play a game where we each take turns making up crazy stories about a person or people in a car nearby. The stories are never allowed to be nasty but are often outrageous! It’s amazing how many secret agent super spy’s look exactly like the average pensioner.

16. Appy trails – The Car Butler app can help locate nearby petrol stations, a mechanic or even somewhere to park. The parking alert feature also means you can prevent fines. While it is very useful, it won’t fetch you a sneaky G&T, your pipe or slippers so it loses major butler points there.

17. The right ‘tude dude! – A family road trip is never going to be without its challenges so don’t forget to pack an adventurous spirit and a suitcase full of patience! And have fun.

Hitting the road with Essentially Jess for #IBOT